Heard the one about the Social Security Trust Fund that holds nothing but "IOUs"? That phony claim goes back to at least 1939, when a rabidly anti-Roosevelt journalist named John T. Flynn used a colorful analogy about a tin box in a drawer in order to argue that Social Security was a "monstrosity." But where Flynn was simply mistaken, many of those who repeat his arguments today have more cynical motives.

Flynn's essay, The Social Security "Reserve" Swindle, contains all the same arguments we hear today: The government's just writing IOUs to itself. Social Security is "an offense against younger workers" (who would be about ninety years old now) that will give older generations a free ride. "The best thing to do with this monstrous child," wrote Flynn, would be to slay it at once ..."

Years later a group of people came together to write a comprehensive rebuttal to the anti-Social Security arguments thrown around by John T. Flynn and the hundreds who came after him. They took on all of the myths one by one, demolishing them with a passion that was but thinly concealed by the dryness of their prose.

So who were these pseudo-socialist troublemakers? Was Krugman among them, or Stiglitz, or Dean Baker? Surely there must have been at least one bearded, malcontented economist. There must've bloggers, too, and other members of the "professional left," right? Meet the crazy hippies who took on the anti-Social Security crowd and won: 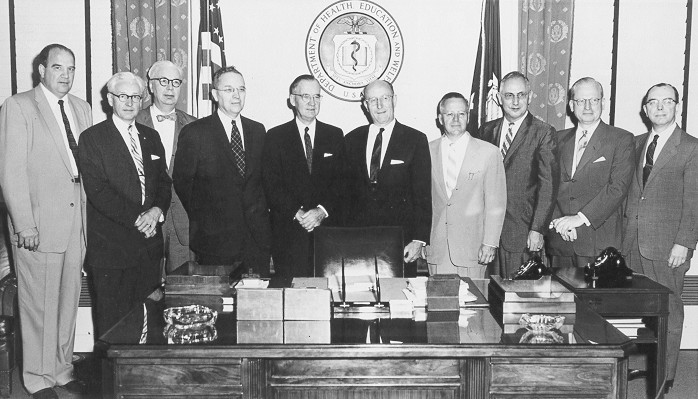 They're members of the 1957-59 Advisory Council for Social Security, appointed by HEW Secretary Marion B. Folsom (he's the dude standing fifth from the left with his hands folded) during the Administration of Dwight D. Eisenhower. Who was on the Council? The editor of Business Week, who was also head of McGraw-Hill's Executive Committee. The Chief Actuary for Metropolitan Life. (Didn't I meet him at Netroots Nation?) The President of Pacific Lighting Corporation. Some eminent economists and business professors. And three union leaders.

In 1959 they issued a paper called "Misunderstandings of Social Security Financing,".and here are the misconceptions they identified and rebutted:

They did such a thorough job that they probably thought they had put these issues to rest. But then, they have dreamers' eyes, don't they? (Especially Mr. R. A. Hohaus, the Met Life Chief Actuary, if you ask me. He's third from the left, and the bow tie shows he's not afraid to reach for the stars. )

It might have killed this group's bubbly and childlike idealism to know that fifty-three years later we'd be seeing blog posts like this one, entitled "I.O.U.? More Like 'You Owe You' By Way Of Social Security." It contains the same specious arguments first trotted out by Flynn in 1939, and decisively laid to rest by the 1958 Advisory Council report. (What's worse is that this guy claims to be a financial advisor.)

And it might have broken the visionary, I-see-a-better-world-to-come heart of Mr. Robert A. Hornby of the Pacific Lighting Corporation to read letters to the editor like this one, addressed to the editors of the Knoxville, Tennessee News-Sentinel from Tea Party supporter Karen F. Laffredi: "Social Security is broke. There are not enough workers to support current Social Security payouts and Congress has already spent the money in the trust fund leaving IOU's." (She goes on to make equally inaccurate statements about health care too, bless her heart, but that's not today's topic.)

A letter writer to the Greeley Tribune makes the same point:

"There is no real money in the "trust fund" -- it's an accounting gimmick -- a stack of government IOU's ... As an illustration, put some cash in a box every month for your kid's college education, then once a year Uncle Ned visits, borrows the cash for booze and puts an IOU in the box. When it's time for college, you'll have a box full of Uncle Ned's IOU's -- and he's drunk and flat broke."

It's John T. Flynn all over again, with a little Eugene O'Neill thrown in for color. Could this really be the state of public knowledge, so many years after the Advisory Council issued its paper? After all, the financial advisor has a vested interest into scaring people. And Ms. Laffredi's probably a person of good intentions who's been manipulated by cynical leaders.

But wait ... it gets worse. As we've discussed before, a Washington Post columnist and Senior Editor at Fortune is making the same "IOU" argument. A blogger who is also (disturbingly) an economics professor argued in 2005 that repeated the discredited Flynn argument with an even more vacuous example (at least Flynn's hypothetical saver actually puts money in a tin box. This guy just writes himself promissory notes for a million bucks.)

Worse, we have candidate for the United States Senate comparing Social Security to Bernie Madoff's crimes and calling it a "Ponzi scheme." As a fact-checking site pointed out, "A Ponzi scheme is based on a lie ... The IOU to the fund, on the other hand, is backed by the full credit and faith of the U.S. government. It must be repaid, with interest ..."

How did it come to this? How did we reach such a state of confusion about the solvency of Social Security? Actuaries deal in probabilities and statistics. What were the odds we'd be so confused in 2010? It isn't accidental, of course. It's the result of a concerted public relations effort, kicked off in 2005 by George W. Bush. Bush called reporters into his office and said "There is no trust 'fund' -- just IOUs that I saw firsthand." He showed them a file drawer to illustrate his argument that the government's obligation to the Social Security Trust Fund are just pieces of paper.

So is a dollar bill. But if the government ever refused to honor one it would set off a panic. Most Treasury obligations are electronic nowadays, and not written on paper, but the principle's the same. As for Madoff, he never had a team of actuaries who verified the financial soundness of his fund, but Social Security does. (Yes, we know that inside every actuary is a butterfly yearning to be free ... but they get certified to do this sort of thing.)

Former President Bush's message has been consistently promoted by billionaire Pete Peterson, too, through a variety of funded vehicles that include the "America Speaks" Social Security town halls and his Fiscal Times "news" service.

My money's on the actuaries. They have to take tests ... hard tests ... before they issue opinions. Check out Actuarial Note No. 142 from the Social Security Administration's Chief Actuary if you want to understand the nature of those "pieces of paper."(1) Here's what it explains: Lawmakers rightly thought that the money people pay into Social Security should earn interest when it's not used. It was invested in Treasury bonds, certificates, and notes because lawmakers thought that was the safest place to put the people's money.

The safest place? These lawmakers hadn't met Alan Simpson. He's the head of the Deficit Commission, that group that wants to keep the money instead of paying it back. If he and his fellow-travelers succeed, it would be the first time in the history of the United States Government that it has ever defaulted on an obligation. Why would they want to do that? Because then they wouldn't have to raise taxes on the wealthiest Americans. They'd have to cut benefits to get away with it, but that doesn't bother them.

But before they succeed, they're going to have to get past the Advisory Council. (You may say that Robert A. Hornby of the Pacific Lighting Corporation is a dreamer, but he's not the only one.) And they're going to have to deal with ... the actuaries. That's why they've mounted an enormous public relations campaign: to convince you that these government certificates of indebtedeness are just IOUs, and that Social Security is "broke." They're using arguments that are seventy-one years old, which is old enough to collect Social Security -- although if they have their way, it may not be for long.

The "IOU" story isn't true. The Social Security Advisory Council told you that in 1959, and so did the Head Actuary himself. Tell everyone: The Social Security Trust Fund has investments backed by the full faith and credit of the US government, not IOUs. It has a surplus, not an empty file cabinet. It's financially sound, and with a minor adjustment (raising the payroll cap will do it) it will be financially sound forever.

If they ask how you know all that, tell 'em R. A. Hohaus of Metropolitan Life told you so.

(1) The Note was written in 1999, so the figures aren't updated, but it puts these obligations in the right context. "The law has required," says the Note, "that trust fund assets be invested only in 'interest-bearing obligations of the United States or in obligations guaranteed as to both principal and interest by the United States."

The Note explains that these investments "may be either short-term 'certificates of indebtedness' or longer-term special issues in the form of notes or bonds," which "the Treasury is authorized to issue ..." Why invest in Treasury notes, bonds, or certificates? Because "this provides the investments of the funds with the greatest possible protection against the risk of loss of principal or interest due to default."