As Donald Trump's seemingly inexorable march towards clinching the Republican Party's presidential nomination continues, it seems that most Republicans have already forgotten -- or have chosen to forget -- the shameful, obscene way in which their presumptive nominee insulted, "demagogued," "charlataned," clawed and lied his way to the top of their ticket.

However, come November, I hope that a sufficient number of responsible Americans will not have forgotten Trump's astounding ignorance and incoherence on national security, foreign affairs, diplomacy and all matters of government, policy and Constitution.

Come November, I hope a sufficient number of decent Americans -- including family values Conservatives -- will not have forgotten this man's thuggish, foul diatribe ranging from disparaging a woman's most private bodily functions, to mocking a man's disabilities, to ridiculing a captured war hero, to condoning -- even encouraging -- violence at his rallies, all the way to bragging about his own anatomy and private parts and to hailing torture and mass killings of our enemies.

Come November, I hope a sufficient number of compassionate Americans -- including compassionate conservatives -- will not have forgotten this demagogue's vicious and never-ending stream of xenophobic, racist and misogynist rhetoric, especially against women, Mexican immigrants and Muslims, including Muslim-Americans.

Oh sure, the Trump chameleon has six months to change his colors, to "evolve," to act civil -- even "presidential."

As the Washington Post's E.J. Dionne Jr. observes, "Many forces will be at work in the coming weeks to normalize Trump..."

He will surround himself with experts in all matters and will start reading their notes verbatim from teleprompters.

He will try to "put into context," modify, distance himself from -- even disavow -- his previous "toxic stew of hatred and insecurity."

But no amount of contrived "conciliatory" words can even start to chip away at the mountain of bigotry, fear and hate so efficiently built-up by the mogul himself. No amount of "serious," by-others-scripted words read from a teleprompter can even begin to fill the abyss of inexperience and sheer incompetence to lead our country so painfully demonstrated by this charlatan.

While Trump has demonized plenty of Muslim-Americans, come November let us especially remember that there are white headstones at Arlington National Cemetery and at other cemeteries marking the final resting places of young Americans men who gave their lives for their country in combat, who happened to be Muslim -- Muslim-Americans.

For example, the headstone of Kareem Khan, a Specialist in the Stryker Brigade of the U.S. Army's 2nd Infantry division, who was just twenty years old when he, along with three other soldiers, was killed in August 2007 by a hidden bomb in Iraq.

Then there is the white headstone, also at Arlington (below), marking the final resting place of Muslim-American U.S. Army Captain Humayun S. M. Khan who was killed in Iraq by an improvised explosive device on June 8, 2004. 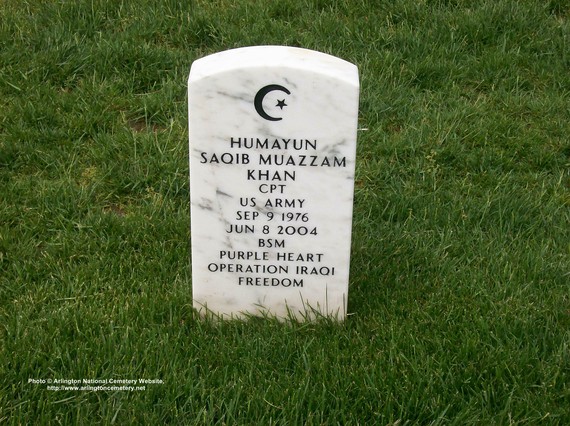 Referring to Kareem Khan, but befitting all Muslim-Americans, last September on the floor of the Senate, Senator Harry Reid said that Khan was one of nearly three million Muslim-Americans who, "are part of the fabric of America. They teach in our schools, fight in our military, and serve in Congress."

Come November, let us not forget the real Donald Trump.