Would you ever think that Courtney Love would be the inspiration for restructuring an entire office culture - which included building a yoga studio in our new office? Well, she was, and this is what happened. 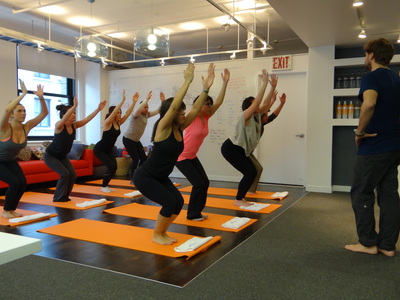 It was April of 2013 and the music festival Coachella was in full swing. My company, Factory 360, had been charged with organizing a series of experiential marketing efforts for our client at Coachella, which included hosting a party for Courtney Love, and I was ecstatic. This was Courtney Love, the tortured, talented artist, who along with Nirvana and Pearl Jam, had followed me on my journey through adolescence into early adulthood. And I was throwing her a party. The 24-year old me knew what a big deal it was to be organizing an event for one of my generation's icons. The 24-year old me could hardly contain his excitement.

But the 40-something me couldn't help but be shocked and dismayed when my Millennial employees confessed they had no clue who Courtney Love was. For me, this event we were throwing was a truly awe-inspiring experience. For them, it meant nothing. They just didn't get what a big deal this was. And I couldn't understand why my young employees didn't get it...until I realized what was really going on. I was a Gen Xer who had been looking at the world through 1994 glasses; I hadn't changed my outlook in twenty years. But the reality was that Courtney Love was not so cool anymore, and it was no longer 1994.

The epiphany I had that night at Coachella wasn't just about Courtney Love. Even before this moment, I had begun to notice a disconnect in the way my employees and I related to one another. I could see that the 20-somethings who signed on to work for me were not motivated by the same bottom-line that had spurred previous generations to devote their lives to their work. They weren't interested in being chained to a desk from 9 to 5 each day. They cared less about money, they wanted to feel like what they were doing was important, and they looked at their working life as just one component of their entire lifestyle.

At the same time that I was becoming aware of this disconnect, I began to notice that the way I was living my life was leading me down a troubling path. Years of long hours at the office, pushing to get ahead, and poor choices when it came to nutrition and exercise were causing me to experience health problems. I found myself suffering from chest pains in my early forties. I was getting older, I was out of shape, and I was becoming increasingly run-down. I needed to do something to reorient myself on a path to better health. And so I found myself in the position of needing to solve two very important problems. I needed to find a way to engage and motivate my Millennial employees, and I also needed to save myself from the poor health trajectory I was on.

As I searched for an answer that could solve these two problems, I began to seek the guidance of my team. One of the surprising suggestions coming back to me over and over again was Yoga. My partner, Gaby Neves, is a yoga enthusiast, and for years she had been telling me about how great yoga is -- especially when it comes to relieving stress and how it brings people together. The more I thought about it, the more I got behind the idea. I realized that yoga represents what the Millennial generation is all about. Yoga is practiced as part of a team, it gives the group a feeling that everyone is connected, and it can be a terrific way to cultivate team spirit. It is a way to calm both mind and body, and I knew it would be a terrific way to reduce the stress level at the office.

So, when we decided to move into a new office, I built a yoga studio into our office space, and I began to integrate yoga into the entire flow of the day. Practicing yoga in the office with my employees has been a constant reminder for me of how to connect with the Millennial generation. It has boosted office morale and has engaged and motivated my workers like never before. What's more, yoga is something that everyone can do, regardless of age, which is why my own practice of yoga has been helping me to live a healthier lifestyle as well.

As we began to practice yoga at the office, I found that yoga was a stepping stone to a better way of living. Millennials tend not to separate their work life from their home life in the same way that previous generations have done, and so I have been embracing this concept by encouraging my staff to make healthy lifestyle choices throughout the day. We offer in-office massages, manicures, and we have Fitness Fridays, where our staff is encouraged to work out together at a local gym. Even the food choices we have in our pantry are healthier. I have noticed my waistline slimming, and I no longer have chest pains. In my forties, I feel healthier than I have felt in over a decade.

On top of all of these smart life choices, something else that brings life to our office is humor. I try my hardest to bring laughter into all aspects of the day. I want my employees laughing. As far as I see it, if they're not laughing, something is wrong. If I go for sustained periods of time without hearing laughter, I make sure to instigate it. I am not afraid to poke fun at myself, especially for the good cause of bringing joy to my workers. I never want my employees to dread coming to the office in the morning. I want them waking up excited for another day at work.

What began as an "aha" moment at an event for Courtney Love has led me to totally revamp the way I structure the workday. As I searched and found what was best about my Millennial employees, I realized that this generation has a lot to teach us. Much has been written about how Millennials are lazy, self-centered narcissists who don't know the value of hard work. True, this new generation of workers may operate differently than generations prior.

But if we give ourselves permission to reinvent the modern workforce, we can come to realize that Millennials are not the self-absorbed, lazy free-loaders that they have gotten a bad rap for lately in the press, but rather confident, mindful young people who know how to integrate meaning and mindfulness into their vocational lives.

And, as I incorporated yoga into the pulse and pace of our workday, our office has been able to harness a collective energy that didn't exist before. Morale is great, work is productive, and we all feel better mentally and physically. If we rethink how to structure the workforce and if we allow what's best about our Millennial employees to lead the way, we can do something that is good for all of us.