The next time you catch yourself crying on a street corner, just hope that Maria Sanchez is taking clandestine photos of you.

Last week, Dave Thomas, a San Bernardino man, was briefly jailed for failure to appear in court for traffic violations, leading to the impoundment of his dog on Feb. 13.

Upon release, Buzz Lightyear, a 2-year-old pit bull mix, was waiting for him at the San Bernardino City Animal Shelter. But Thomas couldn't pay the $400 to get his pet back, KABC reported.

Just as Thomas found out he couldn't get his dog back, Maria Sanchez, a photographer at the shelter who happened to be watching, captured the scene on camera. 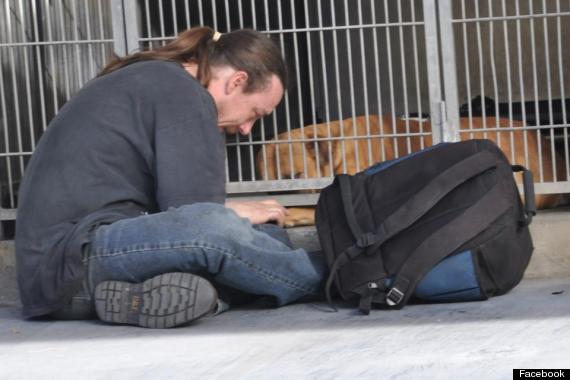 "He was pouring water into his dog's water bowl, his dog sat there and licked up the water for about a minute, he sat down next to him and started weeping," Sanchez told KABC.

She posted the photo to Facebook, where strangers pledged to help the man.

Since Thomas hadn't left a phone number or a name at the facility, Sanchez needed to identify him before she could reach out.

She made phone calls and posted calls for help online. She drove around town posting flyers. She received a traffic ticket and had her car sideswiped.

All the while, donations poured in. On Monday night, KABC identified Thomas and put him in touch with Sanchez, who told him the cost of getting Buzz back was covered.

"God bless you darling," he said over the phone.

Dave Thomas, San Bernardino Man, Gets Dog Back After Stranger Takes Heartbreaking Photo At Animal Shelter (PHOTO, VIDEO)
Animal Moms
1 / 8
Mom Cat Adopts Red Panda Cubs
<a href="http://news.bbc.co.uk/2/hi/europe/7498895.stm" target="_hplink">According to BBC News</a>, a Dutch zookeeper's cat adopted two baby red pandas after the cubs were rejected by their mother. The cat -- which had just given birth to a litter of her own kittens -- nursed the panda cubs alongside her own babies, giving them a chance of survival. The red panda is an endangered species that lives in Himalayan regions in China, Bhutan, Nepal, India, and Burma.
YouTube/Cora68