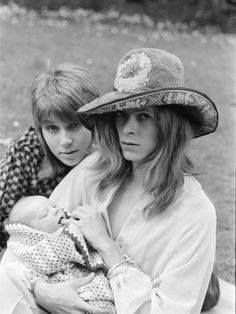 Born in Tehran, Iran in 1960, I was part of the generation around the world who watched the landing on the moon as a little girl. I am not sure if I heard the Space Oddity playing in the background of the live BBC TV broadcast of that momentous occasion. In Iran we must have picked up the American station's broadcast.

David Bowie came into my life later when I had become a teen. Just when I started seeing that the dress suited career moms, like my own, far from being feminists, were, instead, enemy collaborators.

You see, rock and roll in general, and David Bowie, in particular, helped me transition out of the hypocritical society where my parents dwelled. I got into Bowie around the same time I started questioning the upper class Iranian society of the seventies, with all it's pretentiousness and blind and often ridiculous mimicking of the West.

Rock and Roll underlined the vacuity of adopting Western ways before really understanding them like our parents had done. The music was a universal language (even if we sang the words all wrong) that united generations against the suffocating conservatism of parents. My mom and dad's backwardness despite all the Western accouterments, or perhaps because of it, was laid bare by the truth-telling iconoclastic rockers.

The rockers like Mick Jagger and David Bowie were a new kind of farangi or westerner. Ones that we could finally love -- the colonialist as the has- smoking rocker who hates his parents' colonialist mindset. How cool is that? A boy from Brixton who not only rejected the notion of Western superiority but seemed to apologize for it in every shape and form he could make himself. Because, surely, whenever you question and reject set notions of masculinity you are, in a way, rejecting notions of superiority altogether. Rock and roll spelled the end of western colonialism and the rise of a new form of hegemonic power that existed beyond the confines of geography: youth.

Never mind where you came from or what you had between your legs -- this new universe was all about shedding shame and screaming it on mountain tops. As the jumbo jet made the world smaller the "us and them' was no longer a geographic divide but a generational one and the wider the gap became the more liberated we felt. Bowie helped us dance away from the lies that made up our parents lives. The fact that rock and roll is still rather illegal in Iran is proof of its enormous power. Authorities from Beijing to Tehran, are still afraid of this genre that has transformed all our lives more than any other.

I haven't cried so much since my mom passed away! I grew up with David Bowie. He opened doors in my mind that led to a vast alternative universe where I could breathe free. David Bowie, in his person and his music, freed us of that most suffocating of all patriarchal constructs: the gender binary. Boys could wear makeup and girls were allowed to fall in love with them. The most rejected form of sexuality, namely male homosexuality came out of the dusty closet of history not apologetically, not timidly, but resplendent and confident strutting out all its charm. That bold celebration of male femininity did more to liberate us mentally than any feminist oeuvre. I was a feminist before I read De Beauvoir or Friedan because I listened to Bowie.

Although his musical contribution is enough to make him an icon, his role in freeing whole generations of youth from the suffocating sexism of their parents makes him a pioneer of epic proportions. Many of us, the world over, feel his loss viscerally because he helped us grow. He was, indeed, our liberator par excellence.