At 45, Laura Sweet has thrown plenty of dinner parties. The routine has become familiar: Pick a date, email invites, fire up a few favorite dishes, pour some wine and let the conversations flow.

But for the former hospice volunteer who lives in Walnut Creek, Calif., the dinner she hosted on her apartment building's roof in August was bound to stand out.

For starters, she had to include this warning to guests: "This might be the most unusual dinner invitation I have ever sent, but bear with me, I think we're in for a remarkable experience ... This is not meant to be a morbid conversation..."
The meal's theme: death.

On Aug. 24, Sweet, six friends and hundreds of others in more than 300 cities took part in Death over Dinner, coordinated meals hinged on connecting friends and strangers through conversations about life and death. They took place in churches, assisted living facilities, universities and homes in Florida, California, New York, Washington, India and Australia, among other settings.

"It was an informal way of for us to all sit and get personal about our feelings on death," said Sweet, a former tech website editor who recently transitioned into taking classes in end-of-life care and found the event via Twitter. Among the topics discussed that night: memories of how people learned about family deaths as children, grief and guilt over losing loved ones, the pain of cancer and disease, and how each guest herself wants to die -- in the home, hospital or elsewhere.

Sweet encouraged everyone to bring a favorite mug or glass of a friend who had died and to have champagne and cocktails in them during conversations. It lasted a few hours, long after the dinner table was cleared.

"People hesitated to leave and said they could 'talk about this for days.' I don't use the word magical much, but this evening was," she recalled. 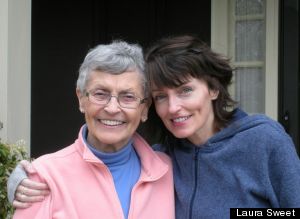 Laura Sweet, with her mother, who died of breast cancer Sept. 10, 2012. Sweet will shared a remembrance of her mother during the Death over Dinner she hosted.

Death over Dinner is the creation of Michael Hebb, a Seattle-based artist, activist and former restaurateur who is currently a visiting fellow at the University of Washington's Department of Communication. A year ago, he and Scott Macklin, the associate director of the university's Communication Leadership program, taught a small, experimental graduate course: "COM 592: Design Studio // Lets Have Dinner and Talk About Death." The idea: for students, Hebb and Macklin to create a project bringing views on death to life through food and drink.

"This is what the table does well. It's a good place to have difficult conversations," said Hebb, who formerly lived in Portland, Ore., and was well-known in foodie circles for his restaurants. These days, he's out of the food business in any formal sense, but still focuses his work on "changing culture through the table."

"People talk about death in the doctor's office, awkward family gatherings, lawyers' offices, all of these awful places that are not designed for a conversation that requires a great deal of humanity and often humor, reverence," said Hebb, 37. "But, historically, it's over food where ideas have come alive."

At the University of Washington, his class designed a "table of truth" -- a simple wooden table where it met for its weekly three-hour courses -- to dine over death. Doctors, palliative caretakers, coffin makers, funeral directors and health care executives visited the students, sharing their own views on the end of life and how it plays out in the United States.

Hebb, whose own interest was spurred by a chance conversation with a pair of doctors while on a Portland-to-Seattle train a few years ago, shared some of the facts that conversation brought to light: 70 percent of Americans want to die at home, but only 20 to 30 percent do; medical bills, including those related to the end of life, are the leading cause of bankruptcy; a Pew Research Center survey in 2009 found that only 29 percent of Americans have a living will.

In April, at TEDMed in Washington, D.C., Michael Hebb introduced Death over Dinner to the crowd.

Now Death over Dinner includes big names like the health care conference TedMED; spiritual teacher Ram Dass; and Marcus Osborne, the vice president of health and wellness payer relations for Walmart, either participating in or supporting the initiative. Using a robust social media and web campaign, it quickly gained hundreds of participants after it was announced in the spring.

"For years, doctors have been talking to doctors about how to talk to patients about dying, which is wonderful, but truthfully, the way we need to shift our thinking is through a grassroots movement like this," said Dianne Gray, president of the Scottsdale, Ariz.-based Elisabeth Kübler-Ross Foundation, which teamed with Hebb to promote the dinners. The date, Aug. 24, was deliberate: It was the anniversary of the 2004 death of Kübler-Ross, a Swiss-American psychiatrist revered as a pioneer in the study of death and for coining the five stages of grief.

"We want to give people an interesting, exciting, maybe slightly sexy or attractive way to have this conversation," said Hebb, who asked participants to start the meals with a toast and 20-second remembrance about someone in their lives who has died. "We often put forward this myth that we don't want to talk about death, but I think we just haven't gotten the right invitations."

Hebb commissioned an interactive website to be created for dinner hosts to use in planning the meals. After a person answers questions about who they will invite and their reasons for hosting, they'll receive an email with a sample invitation and potential questions to bring up at the meal. Some possibilities: What stands in-between you and a deep clear, limitless compassion for all living beings? Are you afraid of death? Why? Does death feel like an end or a doorway?

Hosts also are asked to choose from a selection of dozens of articles, video and audio clips Hebb's team has curated to share with guests as pre-dinner homework. They include a Steve Jobs speech on how to live before you die and an article in which a palliative nurse shares her recollection of the top five regrets of the dying. No. 1 among men? "I wish I hadn't worked so hard." 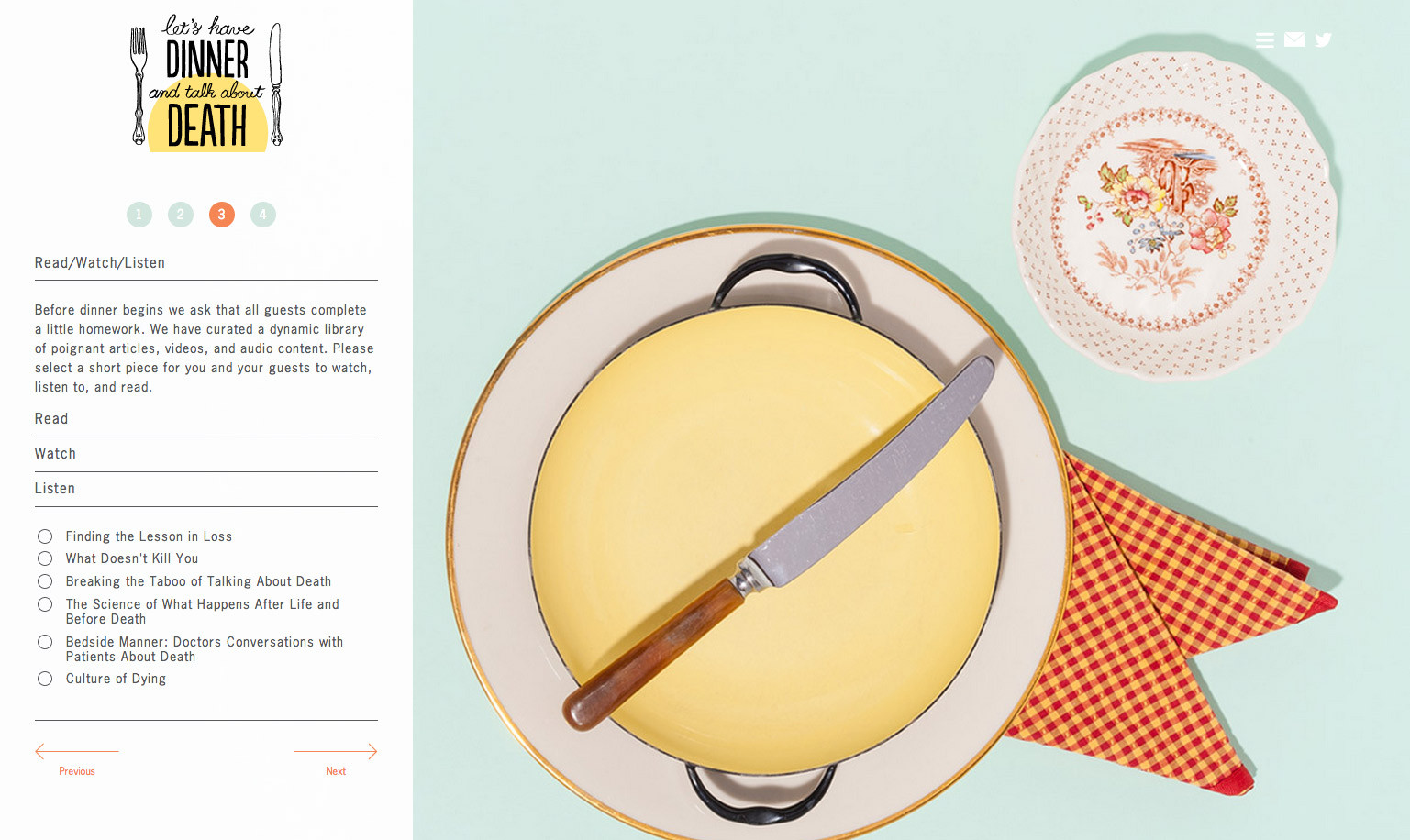 Part of the interactive Death over Dinner planning guide.

Gray, who hosted her own dinner at a favorite restaurant during a visit to Naples, Fla., where she used to live, called it an "amazing experience."

"I shared the table with five extraordinary women who have been a part of my life for the past twenty plus years, including fourteen years while my son was alive and eight since his passing [from a degenerative brain disease] in 2005," Gray said. "As a sisterhood, we had never had that talk about things like, 'What happens if I'm in a coma? Who is in charge of making my hair look good? Who gets my diaries?' It was a very specific conversation about our camaraderie and a revelation of secrets."

With the success of dinners such as Sweet's and Gray's, several on-going ones are now being planned around the country. The dinners are among a number of U.S.-based projects on the end of life that have launched in recent years. They are popularized on social media, where Sweet and many others found Death over Dinner.

Among those projects are Death Cafes, informal discussions hosted monthly in coffee shops in dozens of American cities, as well as tech startups that focus on funerals and end-of-life planning. There's also a card game about death discussions, My Gift of Grace, that a Philadelphia design firm is developing.

Gary Laderman, a professor of religious studies at Emory University whose specialty includes the history of death traditions and funerals, believes these kinds of efforts are bound to grow.

"New forms of communication change the way we express our understanding of death and how we grieve. Social media is, at least in part, a great democratizing force, so I imagine more and more people will turn to Facebook, Twitter, Death Cafes, to struggle with the meaning of death and how to live with it," said Laderman, who authored Rest in Peace: A Cultural History of Death and the Funeral Home in Twentieth-Century America.

"What is certain is that we no longer only and exclusively turn to the 'traditional authorities' in these matters, the religious leader/institution, medical doctor, and the funeral home, but instead work with a wider range of cultural resources to make sense of death and dying, and living with the dead."

This story appears in Issue 68 of our weekly iPad magazine, Huffington, available Friday, Sept. 27 in the iTunes App store.

More:
Best of HuffPostDeathhuffmagreligionend of life