On Wednesday, my friend Alderman Danny Solis will introduce an ordinance that decriminalizes marijuana possession... Anyone caught with 10 grams or less will be issued a $200 fine, instead of being arrested, and given a record for life, as is currently the case. I'm incredibly proud to be a co-sponsor of this ordinance.

Let's talk broadly/nationally for a minute. The War on Drugs has been a complete and utter failure. It's a hideous and malicious joke, which has filled our prisons disproportionately with ethnic minorities and nearly bankrupted our local governments.

743 people out of every 100,000 in our country are in prison. This is the highest number in the world. Russia is second with, 577 out of every 100,000... What an embarrassment! This graph below shows plainly the effect The War on Drugs has had on our incarceration rate. 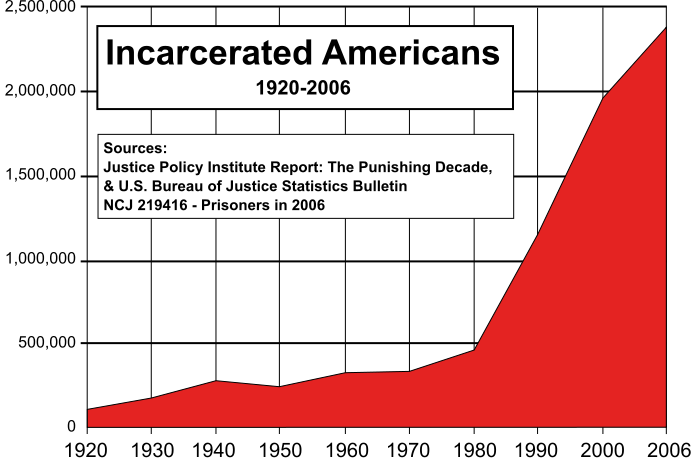 President Nixon created this pretend war as a cynical way to win the votes of a "silent majority" terrified by the counterculture. Unfortunately, it's much easier for government to create a program rather than try to solve an issue. This fictional war has persisted and metastasized over the last 40 years, despite the evidence of its complete failure. This war is estimated to cost the American people over $1,700 every second.

A 2010 study from Harvard economist, Jeffrey Miron, said legalization of all drugs would put $76.8 billion into the economy every year. $6.4 billion of this total would come from taxing marijuana.

I'm not running for president (right now), but as a member of the Chicago City Council I have the power to support this decriminalization ordinance.

Ald. Solis, Ald. Burnett and Cook County Commissioner Fritchey (all colleagues who I deeply admire for telling the truth) were on Chicago Tonight on Thursday talking about the ordinance and why it, quite simply, is commonsense lawmaking.

I tweeted a quote from Chicago Police Department Superintendent, Garry McCarthy, yesterday where he said, "We have to make some intelligent decisions about what calls for service we can't enforce." I totally agree. Every year, 23,000 people are arrested in Chicago for marijuana possession, which costs us about 80,000 police man hours. The police shouldn't be wasting their time arresting and processing people who are caught with an insignificant amount of marijuana. I'd rather see them on the streets, preventing violent crime and catching bad guys. Who wouldn't!?

White people smoke marijuana as much as black and Latino people, yet 78% of those arrested in Chicago are minorities. 90% of those convicted are minorities. These numbers don't lie... The way the law is currently applied is biased against black people and Latinos. Anyone arrested for marijuana possession gets an arrest record for life, which produces all sorts of negative affects for this unlucky individual for the rest of his/her life.

The fact that governments all over the country are broke can be a good thing, if lawmakers are brave enough to stop appealing to the lowest common denominator and start telling the truth. This ordinance begins this in Chicago.

The War on Drugs started a year before I was born. It needs to die ASAP, because it has become a de facto war on poor people, minorities and reason.