A group of African women are taking the big Apple by storm. Apple computers, that is.

In an exclusive partnership with Apple, the artisans behind the fashion accessories company Della based in Ghana are selling their colorful MacBook laptop cases at Apple's New York and Los Angeles flagship stores.

Tina Tangalakis, a former costume design and wardrobe stylist in Hollywood, launched the line in November 2009 after falling in love with the local textiles and people while on a volunteer trip to the West African country.

The vibrant designs, which include hobo bags, headbands and men's ties quickly gained a following of fashion-forward fans that were also socially-conscience.

But how does a such a niche startup gain the attention of colossal corporation?

Thanks to a lot of persistence, little sleep and nine months of "courtship," Tangalakis says she was able to seal the deal with Apple--which to her knowledge is the first time the digital giant has worked with an African based design company.

Each colorful foam-lined case, which come in 11-inches, 13-inches and 15-inches--to fit Apple's full range of MacBook options, is handcrafted by women in the Ghanaian community of Hohoe. And all materials used to make the product are also sourced in Ghana.

"It's a huge deal. In a lot of ways. It could potentially triple or quadruple the people we employ in Ghana," Tangalakis told The Huffington Post. "It also could hopefully open doors for other like-minded companies to partner with larger companies."

Right now Della has 17 full-time seamstresses that are offered healthcare and social security benefits. 100 percent of the company's profits go toward providing employment, education and financial stability for poverty-stricken women in Ghana.

"I've seen how their lives have changed," said Tangalakis. "One of our woman wouldn't be able to put her children through school without this opportunity. And another one would be working in janitorial services and making only a third of what she's making right now."

Tangalakis also notes her personal relationship with the women as one of the most importantly aspects of the business. Although she is based in Los Angeles, she travels to Ghana several times a year to visit the artisans.

While accessories are Della's focus at the moment, the company will launch clothing by the holiday season.

Here's a look at the eye-catching designs Della created for Apple and a short video on how they are made. What do you think? 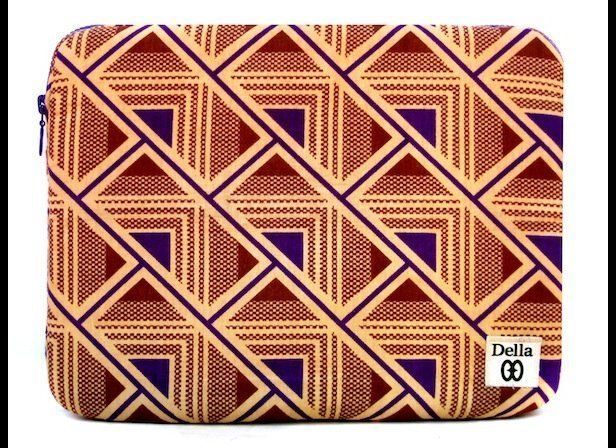