What if you looked beyond the images of Iran that flicker past on the nightly news?

What if you knew that Iran was the birthplace of the revered Persian poet, Rumi and the first charter of human rights?

What if you put aside your preconceptions to glimpse inside the intimate struggles of people trying to live authentic lives in spite of oppression?

Once you make that leap, you'll be rewarded with the uncompromised beauty and power of the new film, Desert Dancer. 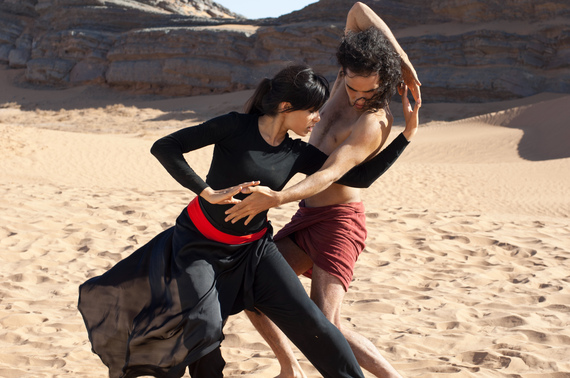 Based on the true story of Iranian dancer Afshin Ghaffarian and directed by Richard Raymond, Desert Dancer shows us how pockets of artistic expression and splendor can emerge even in the most oppressive settings. "I came across a newspaper article about Afshin's story in early 2010.

I was struck by the notion that something as natural as dance would be forbidden in Iran. A country with such an incredibly beautiful artistic history. As an artist, and a film maker, I connected to Afshin's fight to express himself artistically despite huge oppression. I've always felt that oppression wasn't an exclusive club reserved only to foreign regimes--but rather I saw Afshin's story as an allegory of the oppressions that people all over the world face everyday. I've met so many people whose families wouldn't grant them permission to try out a career in the arts because it was deemed "not a proper career" or "not in fitting with their beliefs". Oppression can also be a simple lack of opportunity, which many people are up against. So in this regard I saw Afshin's story as a universal story.

The fight to express oneself artistically and exist. Many people watch Desert Dancer and see themselves in Afshin and his friends. I think this has been the most rewarding aspect of the film - to showcase that many young people who live in Iran are just like us in the West. We're all the same, the youth is the same, no matter where you go, connected through our shared humanity," Raymond explained last week at a screening co-hosted by BoomGen Studios and Noor Film Festival.

Set against the backdrop of an era where dancing is strictly forbidden; a ban that is unable to extinguish the fearless passion of Afshin Ghaffarian, who forms an underground dance group despite the grave dangers. Desert Dancer is a spellbinding narrative of the detours taken to elude the darkness that continues to contaminate the soul of a nation.

Ghaffarian and his fellow dancers find refuge in the desert, where they are able to perform far away from the regime's gaze. It is there that they can "feel what it's like to breathe." This pursuit of autonomy and artistic expression is emblematic of the larger struggle of a post-revolutionary generation that remains resolute in the face of adversity.

These young people know in their hearts that they have more to give, more to express, and more to experience than what's permitted within the walls of an oppressive environment, and they are willing to risk it all in the pursuit of a dream.

Desert Dancer's captivating and moving story of the innate desire to transcend imposed boundaries even under the most challenging of circumstances is a testament that sometimes your inner passion can be your greatest weapon. In fact, Ghaffarian himself believes, "The way I express myself on stage should be seen in a larger context and not only confined to a certain geographical or cultural latitude."

That's why this raw, gripping movie is so resonant. Its essential question - how do we explain the phenomenon of courageous people pushing back against a stifling climate? - is one that defines the post-revolution generation in Iran who does not reflect the laws, and that sometimes the most unimaginable pain can lead to extraordinary blessings. A powerful reminder that if you look closely, there is something so innately perfect about the wisdom and purity that lies within the crevices of an unpaved road.

Not jut as a story of one man overcoming the odds to pursue his dream, Desert Dancer is a powerful metaphor for the daily struggles of the millions of souls in Iran who yearn for something more. The young people of Iran, in particular, are no longer content to remain in shallow waters. Rather, they fearlessly pursue new avenues for expression, imagination, and beauty.

Desert Dancer is a spellbinding reminder that unable to extinguish the flame that burns deep within, people will find the most extraordinary, courageous ways of asserting their humanity. It's possible to stifle creativity and freedom for only so long - even in the desert, flowers find a way to bloom.