A bomb explodes. Glass shatters. Plumes of smoke choke the air. A few heartbeats of dead silence until a cacophony of sirens and screams rip through the Beirut neighbourhood.

Imagine you are a domestic worker, living and working in a house in this neighborhood. You watch as a flood of people stream onto the street to respond to the fallen. But you stay behind closed doors. You have no choice. You have been locked inside. 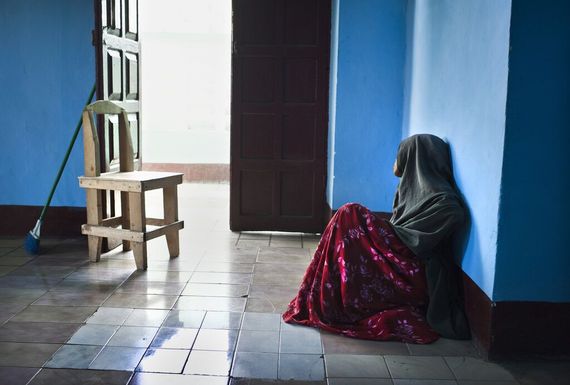 As the tragic and desperate migration crisis in the Mediterranean, and overland from the Middle East to Europe attracts well-deserved media attention, few minds have turned to the 'other migrants' - the low-paid migrant workers who were already labouring in private homes, on isolated farms, on construction sites throughout the Middle East. This includes a group of Cambodian men forced to work in a factory in Saudi Arabia, unable to leave for fear of being beaten; a Filipina hairdresser who paid a recruiter to secure a job in Jordan only to be forced to work as a domestic worker instead; and 46 Indian nurses in Iraq, who were left stranded in a hospital after ISIL fighters devastated the community.

What do we know about these workers? How are the crises in Syria, Iraq, Yemen, and Libya worsening their current conditions?

'The Other Migrant Crisis', a new report published by the Walk Free Foundation and the International Organization for Migration, provides some answers. It draws directly on the case histories of 162 victims of human trafficking supported by the IOM in Egypt, Iraq, Jordan, Lebanon, and Saudi Arabia. Like the domestic worker locked within the home, 87% of migrant workers in this study were confined to their place of employment. 100% had their passports withheld by their employers. 76% had their wages withheld.

These statistics point to the prevalent and alarmingly persistent exploitation of migrant workers in the Middle East. As an interviewee explained to the research team, "I have asked my friends why they lock the domestic worker inside the house... They say it is not safe to leave a young woman and their children inside an unlocked apartment. But I said, "What if there is a fire? How will they get out?" My friends say it is safer to ensure everyone is locked inside. They don't trust the worker to give her a key." A migrant worker is trusted to care for children, just not her own conduct.

When the research team asked employers why they withhold passports, many replied "security". Security, that is, against employees fleeing the workplace, since the employer has outlaid significant finances to recruit the worker to the country. Despite most countries prohibiting the withholding of passports, no interviewee could recall a single case of punishment, despite almost all people describing the practice as "common".

Withholding of wages, psychological and physical violence, deprivation of basic nutrition - these are just some of the many abuses endured by this highly vulnerable population of migrant workers, many of them victims of modern slavery.

As international and local organizations rush to provide badly needed aid to the region's refugees and displaced people, it is vital we do not forget this other cohort of migrant workers in crisis. As the protracted conflict increases, migrant workers in the Middle East need protection from current exploitation and future violence. As reports emerge of ISIL holding migrant workers in situations of debt-bondage in Iraq, using migrant workers for forced labour, as human shields in conflict, and as sexual slaves, it is essential we address the other migrant crisis now. Without doing so, we are in danger of exacerbating the known but insufficiently addressed abuse of migrant workers.

Back to our scene with the domestic worker in Beirut. You now face two choices - do you flee your employer's home the moment it is left unlocked? Do you stay and hope that you are finally paid your salary? If you leave, you face detention and deportation for breaching your visa conditions. If you stay, you risk working for years with no wage, no day off, and little food.

We have no choice. Protecting that domestic worker, pushing for legislative reform and enforcement of existing laws, addressing the detention of migrant workers and challenging common but harmful employment practices such as passport withholding is simply about upholding the most basic of human rights. Without telling this story, we leave our domestic worker hidden in a locked house facing unbearable but preventable choices. By telling this story, we offer hope.