Dinosaur fossils found with the bones of birds and small dinosaurs in their stomachs reveal the beasts may have been adept hunters capable of downing prey more than a third their own size, researchers say.

Fossils are occasionally found with the remains of animals and plants inside what were once their guts. These tummy contents can shed light on what they once ate — for instance, past research showed a mammal predator apparently had a tiny dinosaur as its last meal.

Scientists investigated two specimens of a carnivorous dinosaur from Liaoning, China, known as Sinocalliopteryx gigas. The predator was roughly the size of a wolf, about 6 feet (2 meters) long, and had feathers or hairlike fuzz covering its body to help keep it warm.

Back when this dinosaur was alive, about 120 million years ago, the area was a warm, wet forest, with a diverse fauna of dinosaurs, birds and crocodilians. "It was kind of a quintessential dinosaur environment, with lots of volcanic activity that periodically inundated the landscape and buried things within it with exquisite preservation," said researcher Phil Bell, a vertebrate paleontologist at the Pipestone Creek Dinosaur Initiative in Canada. "Today the area is pretty much farmland, although the farmers all understand the importance of fossils and the interest they create, and a lot have turned to farming for dinosaurs." 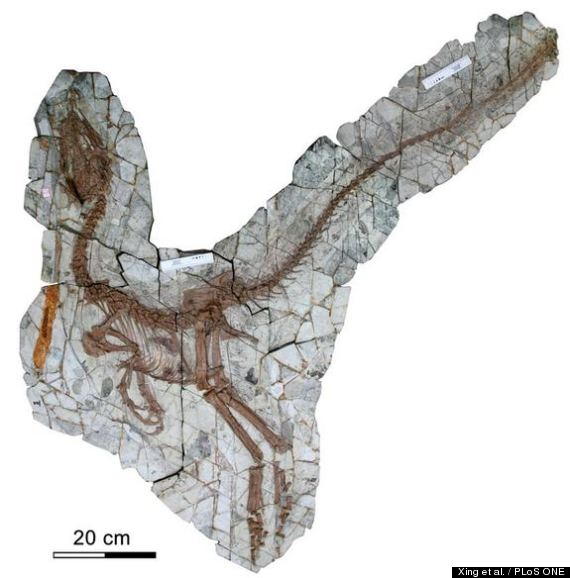 One of the Sinocalliopteryx specimens, a complete and remarkably well-preserved skeleton, apparently dined on a birdlike, cat-size feathered dinosaur known as Sinornithosaurus, judging by the partial leg found in its gut. [See Images of the Dinosaur Guts]

The other Sinocalliopteryx specimen, an incomplete skeleton, held the remains of at least two primitive crow-size birds known as Confuciusornis, as well as acid-etched bones from a dinosaur. (Confuciusornis was probably limited to slow takeoffs and short flights.)

"Stomach remains are evidence of actual interactions between animals, which is extremely rare in the fossil record," Bell told LiveScience. "We're lucky to find one or two bones of anything; to get a specimen with the remains of its last meal or meals is pretty cool."

It remains uncertain whether the dinosaurs actively hunted or scavenged these meals. Still, the fact that Sinocalliopteryx gobbled at least two birds of the same species at about the same time "says chances are very good it was actively selecting its prey; that makes it a predator," Bell said.

And capturing flying prey points to a stealthy, capable hunter, the researchers added.

"What I think is coolest about these findings is that it starts to bring these animals to life," Bell said. "A lot of people look at fossils as just dead things — it's hard for them to imagine them as living, breathing animals. When you get something like this, it really brings them to life."

The scientists detailed their findings online Aug. 29 in the journal PLoS ONE.