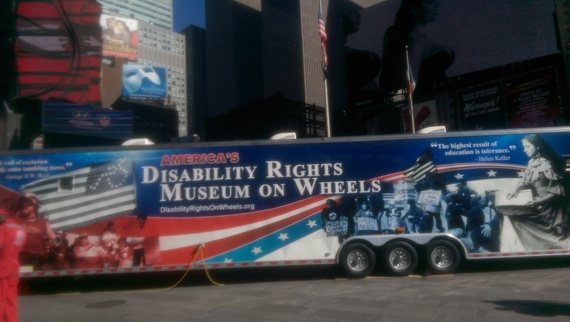 The Americans with Disabilities Act (ADA) is the most far reaching civil rights legislation in American history. This year marks the 25th anniversary of the ADA which was signed into law in 1990 by President George H. W. Bush. Equal rights and equal access to services are now the law of the land; America is a world leader in disability rights. Major celebrations are being held in cities across the land. The Disability Rights Museum on Wheels (DRMW) is part of these celebrations.

The DRMW is housed in an accessible and self-contained 48-foot long trailer that has been touring the country. Its wheelchair-accessible ramp has led thousands of feet - and even more wheels - to the museum entrance to see the history of disability rights in America.

"The rich civil rights history exhibited in the DRMW is not taught in schools alongside other civil rights.. Therefore, having the opportunity to take this history into communities around the country is incredibly important," say Alison Gilkey and Eric Neudel, co-curators of the DRMW exhibitions. Gilkey and Neudel, have guided thousands of people through the exhibit since its opening in July. "We've watched the lightbulb go on when people realize that disability rights are civil rights," they say. "We are all created equal."

Inside the DRMW are interactive and emerging technologies that provide learning opportunities on the history of disability rights in America. It's a lesson in American history told from a distinct point of view. Its ongoing chapters are filled with stories of struggles, triumphs and victories that still remain out of reach. Part of the triumphs are the interactive technologies themselves, many the result of the push for equal access by the disabled. Visually-impaired visitors to the DRMW are offered audio guides; subtitles are offered for the deaf. It's the law.

The museum starts with the history of eugenics, a racist pseudoscience determined to wipe away all human beings deemed "unfit," including people with disabilities. It's shocking to learn that in a country founded on freedom and equality, such beliefs could have existed. It brings into sharp focus the struggle that people with disabilities have waged and won in America.

Americans began the fight for disability rights when returning WWII vets, wounded in their service to our country, found themselves literally locked out of the nation for which they had fought. Doors were too narrow and steep steps too frequent for the wheelchairs on which they now depended for access. The fight for equal rights began.

More difficult than steep steps and narrow doors was the seemingly insurmountable attitude of American society itself. DRMW exhibits show that most Americans were convinced that these men would prefer to be cared for in nursing homes instead of working, raising families and becoming contributing and productive members of society. Not so. 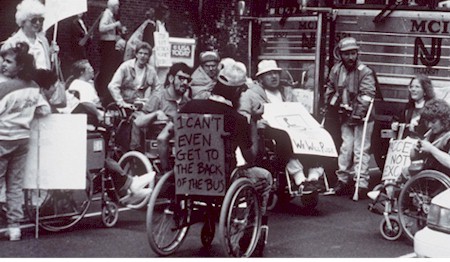 The fight for disability rights has been inextricably linked with the fights waged by others in this country determined to be treated as equals. Photos and film show how the disabled adopted the same tactics and rhetoric used by Dr. Martin Luther King to gain civil rights for African Americans in the 1960s. In the 1970s, the tactics used in protests against the war in Vietnam morphed into tactics used by the disabled, often by those who had fought there. They had returned to a society unequipped to integrate them back into American life. They began to wage a different fight on American soil - the fight for equal rights, equal opportunities and equal dignity. 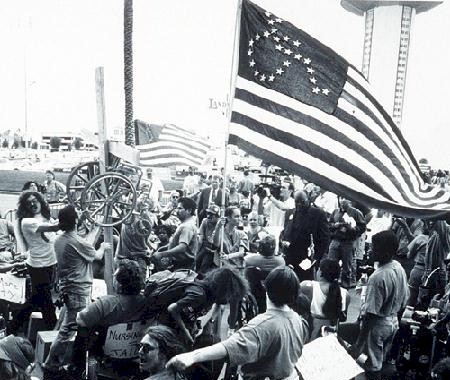 In the 1980s, there was a new type of student demonstration. It was called Deaf President Now (DPN). In 1988, students at Gallaudet University, a school dedicated to educating the deaf, staged a protest when a hearing president was appointed. They effectively shut down the school, and America's first deaf university president, I. King Jordan, was appointed to lead the school. In this landmark decision, people with disabilities had successfully fought to win control over their own lives, their own destinies and their own institutions.

The DRMW shows the effect of these public protests and the positive changes they created in American society. Attitudes were changing. This new visibility and positive reception by the American public acted as a catalyst for other protests.

In 1989, Americans Disabled for Attendant Programs (ADAPT) traveled to the nation's capitol. Here, they abandoned crutches and wheelchairs and began their ascent up the steps of the U.S. Capital Building. Like the fight for equal rights itself, it was yet another difficult struggle. But they succeeded - in every way. They demanded laws guaranteeing their equal rights as American citizens. The television images of disability rights leaders being arrested during this peaceful demonstration shocked the nation. Our country's representative could no longer ignore the dramatic scenes that had taken place on the staircase of the Capitol Building.

In 1990, President George H. W. Bush signed the American with Disabilities Act (ADA) into law. He said of the ADA, "Now, every man, woman, and child with a disability can now pass through once-closed doors into a bright new era of equality, independence, and freedom." Twenty-five years later and using a wheelchair himself, the ADA ensures his access to government offices, restaurants and schools. In short, all doors are open to him and other people with disabilities in America.

During this silver jubilee celebration, the DRMW is rolling along America's highways on a year-long schedule that includes stops across the country. Its exhibitions pay tribute to the grassroots, cross-disability efforts that led to the passage of the ADA, and celebrate the technology that has emerged from efforts at inclusion. But the exhibitions also stress the steps that need to be made for true equality - especially in the workplace.

The DRMW is an initiative by ADA25 Legacy Project supported by the US Business Leadership Network® (USBLN),® a national non-profit that helps business drive performance by leveraging disability inclusion in the workplace, supply chain and marketplace.

Says USBLN Executive Director, Jill Houghton: "It is the story of the fight for equal rights that has been waged for decades - and the fight continues. The long wheelchair-accessible ramp leading to the DRMW reminds us of the long road traveled, and the long path ahead for true equal rights for people with disabilities in American society." 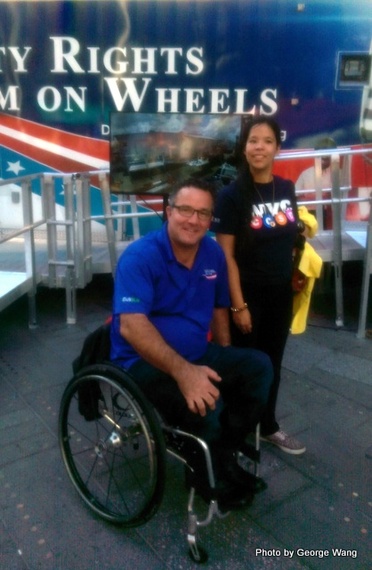