My day usually begins with me checking my phone for the latest overnight news...on instagram. Label me shallow or lame, but it's my social media and I will look at it if I want to. After about six or seven swipes down my instagram feed I see the following meme: 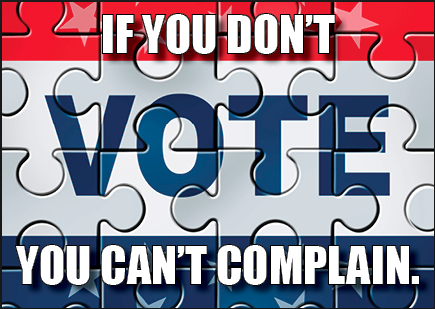 How reasonable is the comment that "If you don't vote. You can't complain," particularly, to the 5.85 million Americans who were unable to exercise their voting rights due to a current or previous felony conviction?

According to the Sentencing Project, 1 in 13 Black adults suffer from suffrage disenfranchisement. In Georgia, it is estimated that the number of people barred from voting is greater than the number of people that voted in the Alaskan senatorial election. People like me who work as an advocate, writer, activist, and strategist in issues of community safety, fair immigration, and racial and gender equity, and serves on several nonprofit boards, even chairing two of them, cannot vote because of parole. The Pew Charitable Trusts calculates that 9.2% of Black adults and 3.2% of Latino adults are under some form of correctional control, so I am no anomaly.

Disenfranchised Floridians were subjugated to the following exchange between candidates for governor Rob Scott (R) and Charlie Crist (D); an exchange that formerly incarcerated folks would have no control over.

Crist: When I was governor, I brought restoration of rights back for nonviolent felons so they can have a chance to get a job. Sadly, under Rick Scott it's gone, and it's gone for at least five years, you can't even apply.
Scott: Here's Charlie's plan. You commit a heinous crime, as soon as you get out of jail, you get to vote. Stalk, you get to vote as soon as you walk out. You have intentional permanent disfigurement of a child, you walk out of jail, you immediately get to vote. That's wrong, Charlie.
Crist: That is fundamentally unfair. I said nonviolent criminals. You are lying again.
Scott: No, that's not true. Go to FactsforFlorida.com, Charlie. You want to look yourself, you can look it up. That's exactly what you did. And I completely disagree with that.

This exchange was aired live on CNN, so you could have searched factsforflorida.com during the commercial break to check to see who was telling the truth. Who was letting perpetrators of heinous crimes participate in the electoral process? After all, the supposed fear is that letting formerly incarcerated people vote--on parole on or not--violent or non-violent--is a threat to public safety...a gateway to more crimes, particularly more heinous crimes. Or maybe committing a crime relieves you of the right to have a voice in your community despite paying taxes there, raising children there, or determining if a street sign is placed in your neighborhood.

Sarcasm aside, three states permanently revoke voting rights to people with a felony conviction, Kentucky being one of those states, the state of the new majority leader of the US Senate, Mitch McConnell. Most other states require that formerly incarcerated people wait anywhere from two to seven years after completion of their sentence, or until they have finished their term on parole or probation for voting rights restoration.

In 2014, where Blacks and Latinos are overwhelmingly subjugated to carceral punishments, is it sensible to make the claim that if you don't vote you can't complain. History illustrates that voting is a right that the US government is not committed to securing for Blacks and Latinos. Felony disenfranchisement and voter ID restrictions that disproportionately impact Black and Latino people are this country's latest tactic to silence their vote. So, if we cannot vote because the New Jim Crow won't allow us, should we stop complaining that racism and white supremacy is still winning? Adults should take a cue from the young organizers in Ferguson that are redefining what we understand as enfranchisement. Through campaigns like #BlackLivesMatter and #WhyWeCantWait and #HandsUpFerguson, young people are complaining and getting their voices heard--by any means necessary. 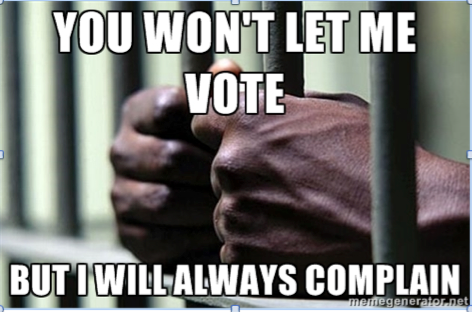 Writer and activist who lives in Brooklyn, NY