Discrimination, it turns out, comes in all shapes and sizes.

I never thought I'd be a victim of this kind of obvious, heartless, shameless red-lining of both apartments and even hotel room rentals.

But no matter how you cut it - the world is turning a blind eye to what can only be called the emergence of the out-of the shadows 'Breedist" discrimination.

What is a breedist? Are you one? Maybe you are, and just don't know it.

Let me tell you about my former breedist ways, and how I've come full circle from discriminating to now being discriminated against.

I live in New York City - and as such have always had strong feelings about dogs. I love them, but always found myself thinking that folks with big city dogs were not doing right by the dogs, or the city. Big dogs can be scary. They roam the sidewalks. They're large and in charge at Pet-Co, and they're dominant at thepark. Simply put - big dogs are, well, Big.

But now there's a movement afoot to limit where big dogs can stay, play, and live.

And big dog owners will tell you it's breed discrimination (breedist). I was happily on the sidelines.

But last summer, after much consideration, I adopted a dog from a rescue. The promise was 'small, to mid-sized' 35 pounds tops.

Now, as it turns out - 35 pounds is mid sized - but small enough to still allow me to travel to the emerging class of dog friendly hotels including Loews and the W chain.

So, with young Louie the puppy a furry tiny thing - my family and I weren't concerned about discrimination - heck, were were small dog people. 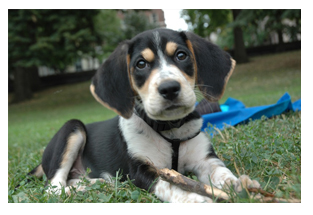 Then, we noticed the paws. Too late, it seems. The vet proclaimed Louie a Coon Hound, maybe a Treeing Walker Coon Hound, and said with little comfort - 60 lbs easy - maybe 75.

How could it be. We'd planned. We'd researched. We'd petted a Puggle. We'd considered a Basset Hound. But now, we were - gasp - Big Dog People. Big.

Soon we were learning that Big Dogs were the subject of new laws and rules. Hotel chains like La Quinta and Best Western were banning big dogs. New York City Public Housing was laying down the law, banning all Dobermans and Rottweilers and dogs over 25 lbs. It seems that government and corporations with a 'dog friendly' policy weren't so friendly to big dogs.

We were faced with the scorn of anti-big dog people, while at the same time needing to rent a car to go and buy puppy chow in 40 lb bags from Cosco.

So, what to do? Do we try and sneak our already 66 pound 'puppy' past the bellman at the Holiday Inn? Or do we join the increasingly militant movement of dog families who don't want to be barred from their fido friendly lodging of choice?

Now, given the overall issues in the world - this may seem trivial, even silly (ok, it is). But then again, maybe not. Families with poodle are going to be welcomed into public housing with open arms. But a family with a German Shepherd or a Golden Retriever is going to be forced to choose between their dog or their domicile? Hardly seems fair.

What about the family who's planning a coast-to-coast car trip this summer, only to find that there's no room for any dog who can't fit in a shoe box like at the the Plaza Hotel in New York (25 pounds or under). Note that the Fairmont Hotels, which owns the Plaza tells the NY Times they're going to drop weight limits this summer.

Now you may remember that it wasn't that long ago that I blogged about trading my car for a dog. It was last summer. And I have to say, it has been a good deal. Actually a great deal. Louie is a wonderful dog - thoughtful and deeply philosophical as only hounds can be. I asked him how he felt about Bo being in the White House, and he though for a minute and said that that gig was way too much work for a hound. He needs his beauty sleep. So every dog has his day, and his place, and size shouldn't matter.

Which makes me wonder, if we allow breed discrimination to stand what comes next? Only well behaved children on airplanes? No High School student groups allowed to travel in packs of more than 20? What about birds? Snakes? Other reptiles or mammals. What about humans who act like animals eating at All You Can eat salad bars? You see, first they come for the big dogs, but my friends - we're all the victims of discrimination if we don't stand up for Louie and his charming 66 lbs of puppyness. 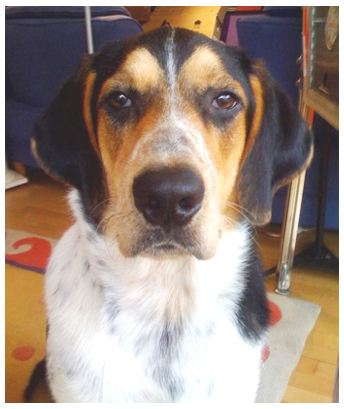