There's a running joke in "The Expendables 2" about Dolph Lungren's character having a degree in chemical engineering, which draws laughter from the audience -- but for different reasons, depending on how much that laughing audience member knows about Dolph Lundgren. It's easy to dismiss the man who brought us Drago in "Rocky IV" as a "dumb galoot," but Lundgren actually does possess a master's degree in chemical engineering and was even on his way to MIT before being cast in the James Bond film, "A View To A Kill." In other words: Dolph Lundgren is a lot smarter than you.

In "The Expendables 2," Lundgren reprises his role of Gunner Jensen, a hard-living gun-for-hire who, along with every other action star from the 1980s (Sylvester Stallone, Arnold Schwarzenegger, Bruce Willis, Chuck Norris and Jean-Claude Van Damme among them), is on the trail of a loose nuclear warhead that could cause havoc if it were to get in the wrong hands. Also, a lot of machine guns and bazookas are fired. Here, Lundgren talks about his journey from a chemical engineering wunderkind to the man who killed Apollo Creed -- and reveals that during a time period when his roles started drying up, he was offered the chance to run for Swedish Parliament.

Oh, also, Lundgren endorses a pick to replace him as He-Man.

At one point it's mentioned that your character is a chemical engineer, which drew laughter from the audience. I'm not sure they realized that you actually are a chemical engineer. Do people know that?
Some people realize it. Yeah, it is funny -- it's almost bizarre to myself to realize, somehow, I used to be an engineer. I used to study every day and do equations and math and physics. But 25 years of shooting people and running around in camouflage, somehow it's been made full circle and people are going, "You used to be a chemical engineer? That's great!" It feels pretty good, in one way, but it's hard to believe. I don't know how it happened.

There's a scene where your characters makes a bomb out of raw materials. How much of all of this do you still remember?
I had to look it up, though, a little bit, on the internet. Because specifically what I was talking about, I had to look it up a little bit. But, yeah, it comes back fairly quickly. I mean, I've been on talk shows and sometimes they try to throw me a few questions to see if there's any truth to it. And usually I get most of them fairly close -- maybe I miss one or two. But it kind of comes back, you know?

Do people who don't know that underestimate you? Are you the Will Hunting of action stars?
Well, yeah, I think if you're a tall blond -- whether you're a woman or a man -- you get underestimated. Especially if you take your shirt off a lot and run around with machine guns. For sure. I mean, intellectually underestimated. But, that's OK. I think it's nice to have something for people to discover about you, you know? And that's always true in life, too -- to be underestimated.

OK, so the bomb you make in the movie comically didn't work.
Well, the comedy, that's beyond my control. The comedy was that it didn't work.

What did Gunner do wrong?
Well, it would have had to have been more complicated than that. You'd have to take the phosphate and have it refined, probably mix it with something else -- gunpowder. I mean, they threw some gunpowder in there, but I think you'd have to be much more intricate and it would take much longer if you want to blow that place up. You'd have to plan it better and you couldn't built it in 15 seconds in a movie, that's for sure.

So, in the first movie, Gunner turns on the group. What happens between the two movies so that everyone trusts him again as much as they do?
Well, in the first film, originally, you realized he was using something -- some substance. And that kind of got taken out of the movie. It's hinted at. So I think he stopped that -- he drinks a bit. But he went on some other mission with Stallone so they can trust him a little bit. So when we see him again, he's kind of back down on planet Earth, more or less. I got the feeling that, you know, some guys, if you do too much of everything, it's irreversible. There's a kind of -- I wouldn't say Ozzy Osbourne effect -- but there's something, at least the way it appears in reality. He's there, but he isn't. With Gunner, he's there, but he isn't quite there. An aging rock star kind of thing.

Who were the biggest rivals on set?
Well, Sly is the boss. He's the producer -- he's the main man all of the time. I mean, all of the guys on the good guys side, they all kind of toe the line because we're all under Stallone, doing our thing, trying to get through the day without getting blown up, or something. Then you've got the bad guys side and you have Van Damme, but I don't think there was a rivalry in that sense of the word. It was impressive when Arnold and Bruce and those guys shot -- because I know they're good friends from the Planet Hollywood days. In the first one there was a little bit, there was a little bit of that. Because he wasn't sure of me -- he didn't know me as a person and he probably thought I was crazy. So, he'd scare me in the first one for real. But, this one, we got along well. So, Gunner and the girl, maybe? We were rivals? [Laughing]

Do you have a love-hate relationship with the character of Drago from "Rocky IV"? That character almost became how people perceived you in reality.
Yeah, I agree. I guess that role was a blessing in disguise. Because it brought me out of obscurity into being kind of well known in the business. But, on the other hand, I was playing something that was so different than me that it has taken a while to get out of that stigma. "Expendables" has kind of, strangely enough Stallone again, has helped because a lot of people see it. And the guy is colorful and interesting. You know, he's not Cary Grant [laughs], but at least he's somebody who has some different things.

After "Rocky IV," Masters of the Universe" and even "Universal Soldier," when you were doing movies that were less successful, was there ever a thought of falling back on your masters degree in chemical engineering?
[Pauses] I don't know if I thought ... I didn't think of becoming a chemical engineer again, but I was stroking the idea of trying something else. You know, I had an offer to run for office in Sweden, believe it or not, for the parliament for one of the parties -- and I didn't want to do that because I didn't want to move back to Sweden full time. I thought about other things, you know, business and stuff. I moved back to Europe for ten years because my kids -- my wife didn't like L.A. at all, didn't want to live here. She went to New York, then London and Spain. Now that my kids are old enough ... we got divorced anyway and I like L.A. and my new girlfriend likes it here, so I'm back here and I'm back in the acting business. But I did think, for a while, to try other things. Nothing worked out though.

It came out this week that there might be a new "Masters of the Universe" movie. Who would you pick to take over as He-Man?
Well, let's see. You need somebody who's well built and charming, I suppose. And he can deliver a couple of lines of dialogue, I guess more than I had [laughs]. I mean, Channing Tatum? I don't know. I don't know that many young actors. But he's got a pretty good body. He's got a naturally athletic body which you need, unless you make the guy wear a suit, like Batman. But if you need real muscles, you need somebody who is built.

So you're on board?
I'm on board. I second that opinion. 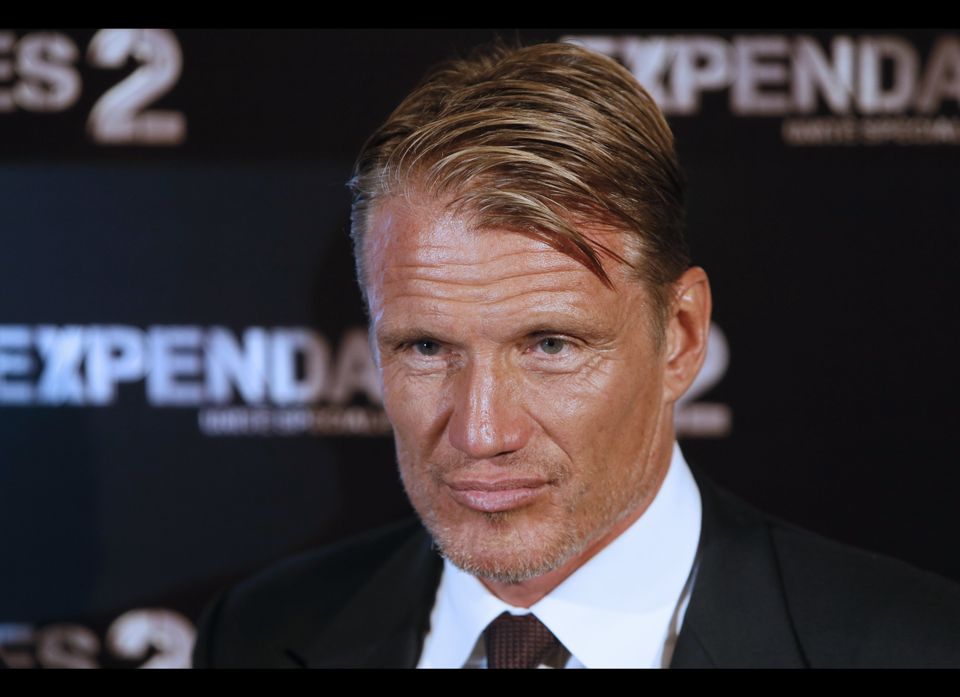