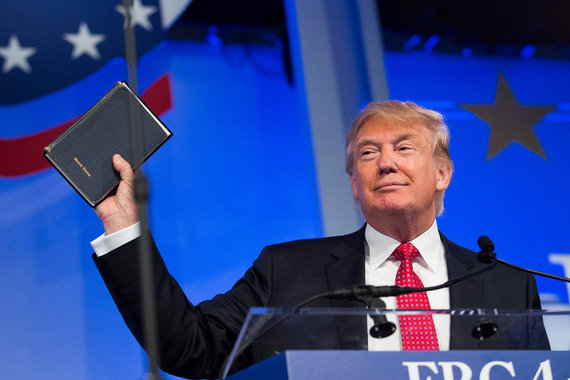 After the election, I made public my disgust of the alliance between Trump and evangelicals. I did so by stating my surprise--in addition to my chagrin--of the outcome.

But I was wrong. I should not have been surprised by Trump's success among evangelicals. In fact, after I took some time to process and reflect, I now see that Trump is, in many ways, analogous to the evangelical God. Said differently, perhaps Trump is more like their God than I may have realized.

Let me explain by making a few comparisons between Trump and evangelical ideas of God.

On Women.
How quickly we are to condemn Trump's "deplorable" language about groping and grabbing women by their genitalia, but have we really considered the view of women in evangelical churches and their sacred texts?

If we read the Hebrew Bible, we can see it is no secret that, based on the text, one could deduce that women have a lesser value or status than men. This is evident in all the nameless women, the collection of women and concubines (polygyny), the acceptance of rape, the expulsion of women on their menstrual cycles, the value placed on sexual purity (for the woman) and their ability to conceive and bear (boy) children. Fortunately, new feminist readings of some of the most gender-troubling texts have become more popular as people have begun challenging the harmful norms and practices in these texts. As author Rachel Hold Evans contends, in A Year of Biblical Womanhood, "Feminism is the radical notion that women are people."

On War.
While many have expressed grave concern about Trump's tendency to talk about nuclear weapon enrichment or the execution of terrorists' entire families, how do we consider this in light of a God of genocide?

For most of my life, I have heard the God of the Hebrew Bible defended by the claim, "God is merciful, but God is just." That is how troubling passages were dealt with: gloss over them by making it about God's unquestionable character. As a result, questioning the passages is treated as questioning God completely. (Such moves are effectively motivated by shaming.) Making a lateral move like that helps distract us from when God kills everyone in a flood (Gen. 7), kills 500,000 Israelites (2 Chron. 13:15-18), and all the different God-sanctioned acts of genocide: (Deut. 2) (Deut. 3), (Joshua 6), and so on.

How do we deal with a God that commands "Thou Shall Not Kill" and then commands those same people to kill?

Inherent in defenses of a God that kills is that people deserve it; because of the Fall, it is taught that we all deserve death. I wonder, in what ways does that make war easier? All that is needed to kill is a just cause. According to that line of theological thinking, there can be no atoning or wholeness without blood sacrifice. After all, "the wages of sin is death..." And just who gets to decide what is sinful?

On Sovereignty and Power.
Donald Trump has conteded that only he can fix the system in the US. With a bold claim, Trump assumes a special power. With the presidency now secured, he is afforded a certain sovereignty that comes with that power. He made clear that he alone is the answer to the current state of affairs in America; he is the only hope. That type of language sounds familiar.

Throughout many of the Hebrew texts, God is portrayed and perceived as all powerful and, in all things, sovereign. With power and sovereignty, however, comes ultimate responsibility. God is, thus, the reason why droughts and famines occur, why people get sick and die, why the children of Israel constantly fall victim to aggressive enemies, and the only one that can rescue the people from enslavement (spoiler: it never works out).

In this way, Trump is seen as a type of God. Just as evangelicals put all hope and trust in a powerful and sovereign God, they have put their hope in Trump. As I read through the scriptures, I am reminded of the people's desire for God to give them a king. Ironically, however, that never worked out. Yet, once again, a messianic hope has come from the Republican party, or so it seems.

So, how do we respond?

Now, I would be remiss if I did not push back against these harmful notions about God and their political consequences. Here is what I am suggesting: For the next four years, we must let our sense of humanity transcend our religious dogma. Needed now more than ever is a litmus test for our theology, not just our politics.

The Reverend Dr. William Barber has recently made a compelling argument for how to deal with the coming challenges of the incoming administration: America needs a "Moral Center," not a "Religious Left." A moral agenda "must be anti-racist, anti-poverty, pro-justice, pro-labor, transformative and deeply rooted and built within a fusion coalition."

2017 is a year to challenge theologies of American evangelicalism, including their view of God, allegiance to Trump, and consequent worldview. Who's with me?