Actor E. James Ford, clad as a fuzzy, steampunk version of the Greek demigod Charon, dips a mason jar into the stewing Gowanus Canal. He raises it toward the dark sky, reflecting yards of concrete and chain link fence and the logo of a nearby Whole Foods in the murky liquid. He studies it for a second, puts it down. A few minutes later, he takes a sip.

It’s a frigid Sunday night in late autumn, and I’m watching Ford from a wooden pew on a pontoon boat designed by celebrated street artist Swoon. Part river tour guide, part tragic narrator, Ford pilots the vessel up and down the canal’s quiet paths. Along the way, a variety of mythical characters hop on and off, exchanging existential musings about death and beauty and “the land of hot and cold.” We meet Hermes, the Olympian god, and Cerberus, the three-headed dog, and Persephone, for whom Charon harbors a deep and burning love.

We first spotted Charon when he steered the boat toward the parking lot where we’d congregated a few minutes earlier, a lone light emerging from the blackness of the toxic water. One by one, he guided us onto Swoon’s stage, where we sat in wooden church-pew rows, solemnly waiting for his story to unfold.

That night, I’d arrived at Lavender Lake, a posh bar and restaurant in Brooklyn’s Gowanus neighborhood, knowing only that I was about to “embark on a nighttime journey on the canal.” A woman with bleached blond hair at the front table handed me a tarnished, oblong-shaped coin the size of my thumbnail. “This is your obol,” she told me.

“Your obol,” she replied as casually as if she were giving me back a ticket stub. “Now when you see the bells, follow the bells.”

I surveyed my surroundings and couldn’t find any bells. Only clusters of well-dressed thirtysomethings laughing over garlic fries and Manhattans with giant ice cubes.

I was contemplating ordering one of those Manhattans when a low, clear chime rang out from the back of the room. Then another, and another, and as they got louder, I watched a procession of solemn-faced women, shrouded in gray cloaks and rattling tiny copper bells, approach the front door.

A dozen or so patrons, some college aged and others older than my parents, some dressed in sleek hipster ensembles and others sporting Yankees caps, filed into a straight line behind them, expressions equally solemn. I joined and we exited Lavender Lake, all in a row, bells ringing and not so much as a whisper exchanged among us.

We followed the cloaked women up a staircase in an adjacent building and into an empty room, wooden floor and piping exposed. One by one, silently, the women dressed us each in our own cloak, soft and bulky over our sweatshirts and jackets and scarves. They led us outside once more, down alleys and through parking lots, past empty warehouses and the skeletons of condo developments, until we reached the edge of the canal.

“What’s going on with you guys?” a passerby who had stopped his bike to watch the scene unfold asked one of the Yankee Caps. She shrugged. “It’s a play.”

The play was the Dreary Coast, brainchild of Jeff Stark, a legend in certain Brooklyn underground arts circles and purveyor of the popular Nonsense NYC email blast. Stark has lived two blocks from the canal for the past 15 years, and he’s dreamed of staging a performance on its waters for nearly as long. For the past year, he’s scouted the bridges and rock formations and vacant lots that dot its banks, surveying the most appealing – and legal – locations for scenes to unfold. 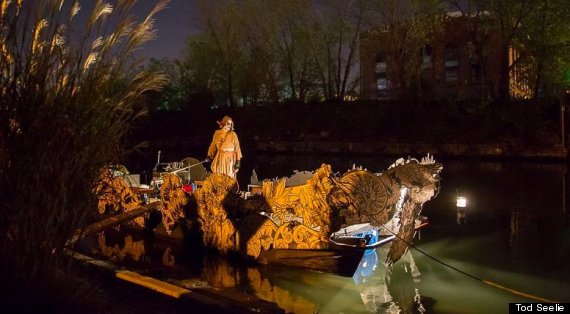 With a budget of $40,000 (mostly raised on Kickstarter) and dozens of collaborators, including the well-known local “experience architect” N.D. Austin, Stark’s dream became a reality. I caught up with him after the show to find out exactly what goes into staging an elaborate, full-scale production atop a polluted waterway.

What sparked the idea for the Dreary Coast? Ten years ago, I went with an activist group called the Urban Divers on a canoe tour of the Gowanus Canal. We were very close to the filthy water; the guide was showing us each of these sites that had been horribly polluted with industrial chemicals for more than a century. It was a horrifying experience.

So you've been plotting this for over a decade? The idea has been percolating for that long, but the show has been in the making for the past four years. Four years ago I started doing research. I knew it would be a show on a boat with Charon.

Why Charon? He's an old character. He pops up in all this great mythology. He was painted by Michelangelo. He's been all over the place. But we don't know much about him -- he has two lines here and there. We know he's responsible for steering passengers from one site to the next as a metaphor for life and death. We also know you have to pay him for that passage.

Is that why we gave him a coin to get onto the boat? That's called an obol. That was the fee you paid him. We hand printed each one using pennies.

I loved all the little details like that. That was one of the most rewarding things, for audience members to realize how deep and detailed our world was. We had artists who home brewed the mead we used at the end of the show. The shot glasses were hand blown by one of our artists. One of the funeral scenes has these floating candles; if you look closely, you realize they're horseshoe crabs. Every single thing in the show had a hand in it.

What kind of preparation went into plotting out the show? It's a tremendous amount of scouting. I began with a story, and then I started looking for places along the canal to stage it. Specific locations that I could elaborate upon and make into stages. A good example is the large pile of blocks across the canal from the terminus of Bond Street. I knew that was going to be a site; it ended up being Haede's throne room.

Did you rehearse in these spots? Yeah, we did rehearsals down there on the canal. We took fabric swatches down there to see what they would look like under the streetlights. We'd see how much difference we could get on different lamps and lanterns, the actors tested how loud their voices needed to be. In all those rehearsals, we were building relationships with people in the neighborhood. Getting arts organizations on board.

And the cops. The initial encounters were pretty intense. Some of the spots that we were working out of were the kinds of places where kids go to hang out and smoke weed, a homeless person finds their way down there to sleep. The cops feel pretty aggressive in those areas; they were very much looking to bust us.

We always maintained that we weren’t doing anything wrong or illegal. We were not running away from them and not hiding. We were working out of a public space. The cops are totally disgusted by the canal; they basically think we're the stupidest people on earth and want nothing to do with us. Whenever they’d roll up on us and see us in a boat, they'd go, “Ugh, don’t fall in, and if you do, don’t call me. We won’t help you.”

So it wasn’t illegal? The canal is a public space. It's a New York City waterway. If you were to ask if I had permits, I said no, and then I would ask them to tell me what kind of permits I needed.

What was the hardest thing you encountered? It’s impossible to name just one. The boats were difficult and unpredictable. We had to restage an entire show more than once on the fly because a motor died. We were constantly changing the course of the show, sometimes during a performance itself.

How did you pull that off? I was always on the main boat, and I had a radio in my ear. I talked with a stage manager who communicated with the actors via a radio system.

Is E. James Ford an avid sailor? He had no boating experience. He spent his summer going to canoe and rowing classes. Once we got our boat, he watched YouTube videos on how to pilot a pontoon.

How has the canal changed since you first moved to the area? It hasn't changed. That's the problem. The canal is just as disgusting as it's always been. Now that it has this superfund designation, they're doing all sorts of new work on it, and by most accounts, industrial pollution has waned.

Ford didn’t actually drink a sip of canal water, then…right? No, Charon did not drink canal water. He takes in a cup from the canal at the start, and in the middle of the show he switches the Gowanus cup for a cup of tea, to which he says, "Ugh, too sweet.”

You may or may not have convinced me otherwise. Then we made some theater magic!

Why the bar setting at the beginning? And why dress the audience members in matching gray cloaks? We wanted to acknowledge our audience as very much a part of this show and a part of this world. In all theater, we're entering into a contract with the audience. We’re existing in that space together at the same time. We wanted to remind people of this process of transformation as they left the bar and started to come into our world.

Do you think they responded positively to that? It made people cry. People were overwhelmed. Certain scenes were absolutely breathtaking and so unexpected. You come to this place that’s incredibly polluted, incredibly disgusting, only to be transported into this world where you're suddenly caught off guard by characters you actually care about.

But one of the points of the show is that beauty comes from things that are temporary. That’s what makes something like this so special. We know it's not going to come around again. It will just happen once.