If you need a pick-me-up this week, these delightful echidna puggles may be able to lend a chubby hand.

According to Australia's Herald Sun, a pair of baby short-beaked echidnas were born at Perth Zoo this August. The puggles' arrival into the world reportedly marked a breeding milestone for the Australian zoo.

"These [baby Echidnas] represent the first successful breeding from zoo-born Echidnas and have shown that echidnas breed at a younger age than previously thought," writes Zooborns.com.

"The puggles were born to four-year-old first-time mothers Mila and Chindi, both bred and born at Perth Zoo as part of its breeding program for the short-beaked echidna," Environment Minister Bill Marmion said, according to the Herald Sun. "Until now, it was believed female echidnas did not breed until the age of five so these latest births have shed new light on echidna reproduction."

Marmion added, "Only 24 echidnas have been bred in captivity in Australia." Eight of these were reportedly born at Perth Zoo.

The San Diego Zoo describes echidnas (also known as spiny anteaters) as an "almost illogical mammal" that has remained "unchanged since prehistoric times."

Other than their adorably bizarre appearance, echidnas are special for another reason. Like the duck-billed platypus, echidnas -- native to Australia, Tasmania and New Guinea -- are monotremes. The platypus, along with the four species of echidna, are thought to be the only extant mammals that lay eggs.

According to a press release, the two new additions to Perth Zoo's echidna family have been named Nyingarn and Babbin. The names, in the Noongar language of an indigenous Australian group, mean "echidna" and "friend" respectively.

The sexes of the baby echidnas have yet to be determined.

While short-beaked echidnas are not considered to be endangered (though they are protected under Australian law), their long-beaked cousins are. As conservation group EDGE notes, the "three species of long-beaked echidna...are classified as Critically Endangered -- one category away from “Extinct” -- by the IUCN. Their apparent rarity and cryptic behaviour makes them extremely difficult to study, and as a consequence most populations are not currently receiving targeted conservation attention."

Find out more about long-beaked echidnas on the EDGE website.

Click through this slideshow to see more of the pudgy puggle pair: 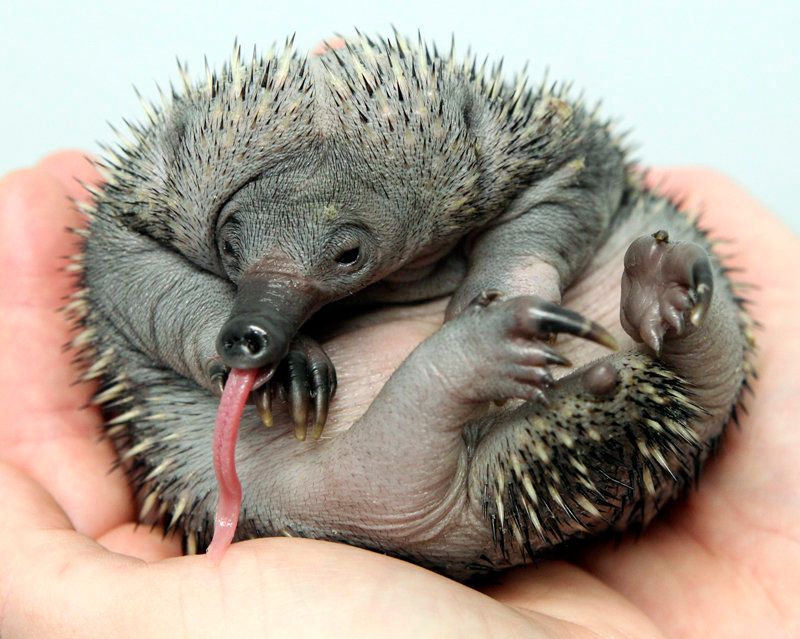