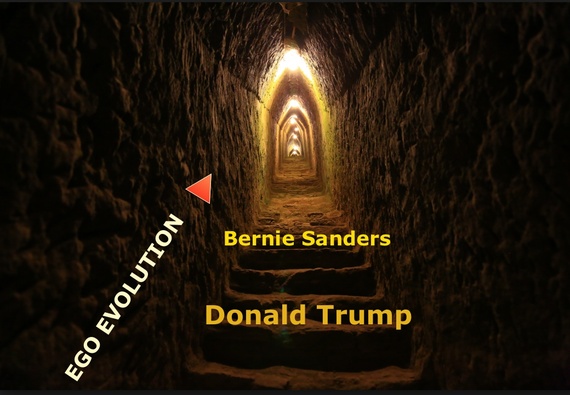 The foundation of the ego is the unconscious sense-based assumption that "I" am separate from everything and everybody else in the world. Our senses give us the common-sense "truth" of this condition every second of our lives. And yet quantum physics shows that we live in a world without boundaries and borders--that every "thing" in creation is comprised of energy/information and connected to every other "thing" in existence.

Mystics and shamans have been pointing out the essential unity of all life for thousands of years. Jesus explained this scientific fact by saying such things as, "My Father and I are one." But the untrained, unmanaged, un-evolved ego can't see the deeper truth of its condition. Thus its primary mandate is to protect and serve its isolated "self."

Because it feels isolated, the un-evolved ego is deeply insecure. It chronically seeks to "look good" and prove itself better than everyone else by having total control over other people and resources.

The good news is, some modern schools of psychology hold that ego consciousness--our self-awareness--evolves over time both individually and collectively. Dr. Abraham Maslow, one of the founders of transpersonal psychology and the Fourth Wave of Psychology, believed that humans evolve through six levels of desire-driven ego function.

The two lowest levels of personal ego are completely absorbed with securing physical needs and gaining control over those needs. After the basics of consistent food, water, shelter, sex and economic security are provided, the ego develops higher interests such as the need to "belong" to a family and community. Once belonging needs are satisfied, a fourth level of needs arises: the need for self-esteem.

Most of Western civilization is currently operating at the fourth level of Maslow's Needs Hierarchy. At this level the ego seeks approval from others through attaining wealth, power and fame--and the more money, the more fame, the more power, the better the ego feels about itself.

A sense of separation and isolation characterizes the four lowest levels of ego function. And when the ego views the world through the lens of separation rather than unification, it dwells in a chronic state of suspicion and fear. Maintaining control over the environment is paramount. And part of maintaining order and control is through the establishment of inflexible rules and beliefs about "how life is."

The unaware ego is terrified of not having all the answers all the time. It's also frightened by a lack of structure. In addition, when everything and everybody are perceived as "other," there is a constant unconscious need to control that "other" in order to remain safe.

Taken together ... the insecurity, the desperate hunger for money and power, the need for absolute answers (right or wrong it doesn't matter), the need for structure, the absolute need to control others ... and what do we have? Donald Trump.

President-elect Trump is quite obviously at the fourth level seeking to bolster his ego's need for self-esteem. He's also deeply mired in base level sex needs and the need for control. (The ego can operate across several levels of consciousness at the same time.)

Self-actualization is the fifth level where the ego's need is to live autonomously and creatively, with no need of outside approval from others--including the need to "look good" in terms of material success.

At the sixth and highest level the ego expands beyond narrow self-identification and selfishness and begins to perceive others and life itself as part of the "self." This is the realm where loves takes over and sister/brotherhood reigns supreme.

The sixth level is called the transpersonal level of ego function and currently millions of people are operating at this level, involved in environmental and social causes, creating NGOs and sustainable businesses, and championing alternative health and sustainable agriculture. The Internet itself is an external reflection of this evolution in consciousness towards interconnectivity, peaceful coexistence, and the recognition of the essential unification of all life.

The progressive political movement--best represented by Bernie Sanders--is most in alignment with the sixth level of transpersonal ego consciousness.

In a time of nuclear devices, bioterrorism, and ecological disaster we can no longer afford to be ruled by less-evolved egos who are ignorant of the nature of reality and the nature of their selves.

Unfortunately, thousands of years of traditional thinking are difficult to set aside, and deeply fundamentalist beliefs rooted in separation and fear will not go quietly into the night. Not every human being on this planet is at the same place in evolution. Not every ego is ready to lay down its defenses and move on. And yet moving on into an evolved understanding about life and the nature of the ego is the antidote to all of our individual and global problems.