WASHINGTON -- On Tuesday, President Barack Obama phoned Egyptian President Abdel Fattah el-Sisi with good news: The White House promised to lift a hold on the transfer of four large-scale weapons systems that had been stalled since October 2013.

“In the interest of U.S. national security, President Obama has directed the release of 12 F-16 aircraft, 20 Harpoon missiles, and up to 125 M1A1 Abrams tank kits that have been held from delivery,” National Security Council spokeswoman Bernadette Meehan said in a statement Tuesday.

According to Meehan, the decision comes after a comprehensive review of U.S. military assistance to Egypt, which was prompted by Sisi's internal August 2013 crackdown.

In July 2013, Sisi, then chief of the Egyptian Army, had forcefully overthrown the democratically elected president Mohamed Morsi, who had replaced longtime president Hosni Mubarak, who had himself been forced out in 2011. After the military takeover, Sisi’s government declared the Muslim Brotherhood a terrorist organization and imprisoned scores of Morsi supporters. Morsi, a member of the Muslim Brotherhood, is currently imprisoned and faces espionage charges.

At the time of the Sisi takeover, the Obama administration tiptoed around the word “coup,” mindful of U.S. appropriations law that forbids sending foreign aid to a country in which the military plays a decisive role in removing the head of government.

"It would not be in the best interests of the United States to immediately change our assistance programs to Egypt," White House press secretary Jay Carney told reporters in July 2013.

The following month, Egyptian security forces opened fire against pro-Morsi protesters in Rabaa, killing at least 817 civilians, according to Human Rights Watch. “The indiscriminate and deliberate use of lethal force resulted in one of the world’s largest killings of demonstrators in a single day in recent history,” wrote Human Rights Watch, noting that the massacre exceeded the Tiananmen Square casualties in 1989.

After the Rabaa massacre, the White House still refrained from calling Sisi’s takeover a coup, but eventually moved to halt a major weapons transfer to Egypt.

Speaking of the decision in October 2013, State Department spokeswoman Jen Psaki said, “We will, however, continue to hold the delivery of certain large-scale military systems and cash assistance to the government pending credible progress toward an inclusive, democratically elected civilian government through free and fair elections.”

On Tuesday, the White House made no attempt to claim that the policy reversal followed credible progress toward a democratic government in Egypt. “Now that the [review] process has been completed, the Administration will use the flexibility provided by Congress in legislation this fiscal year to provide additional military assistance to Egypt,” Meehan said in a statement. “The Administration will not make the so-called 'democracy certification' in that legislation,” she continued.

What Egypt has lacked in democratic progress, it has made up for in military action against U.S. foes. In February, Egypt bombed Islamic State targets in Libya in retaliation for the group’s beheading of 21 Coptic Christians. The White House said it was not given advance notice and avoided weighing in on the operation.

“We are neither condemning nor condoning [the Egyptian strikes]," is all one U.S. official would tell The Daily Beast.

More recently, the regional Arab League announced a 10-nation coalition, led by Saudi Arabia, committed to defeating the Iranian-backed Houthi rebels in Yemen. Both Egypt and Saudi Arabia have discussed the possibility of committing ground troops in Yemen.

Tuesday's decision to unlock weapons transfers to Egypt is not an isolated move by the Obama administration. On Friday, The Wall Street Journal reported that the U.S. military plans to boost aid to Saudi Arabia to support the efforts to drive back the Houthis and restore Yemeni President Abd Rabbuh Mansur Hadi, who reportedly fled the country last week.

Egypt is currently the second-largest recipient of U.S. military financing. According to Meehan, Obama will continue to request $1.3 billion a year in military aid but will stop allowing Egypt to purchase weapons on credit beginning in fiscal year 2018.

Meehan added, “We will continue to engage with Egypt frankly and directly on its political trajectory and to raise human rights and political reform issues at the highest levels.” 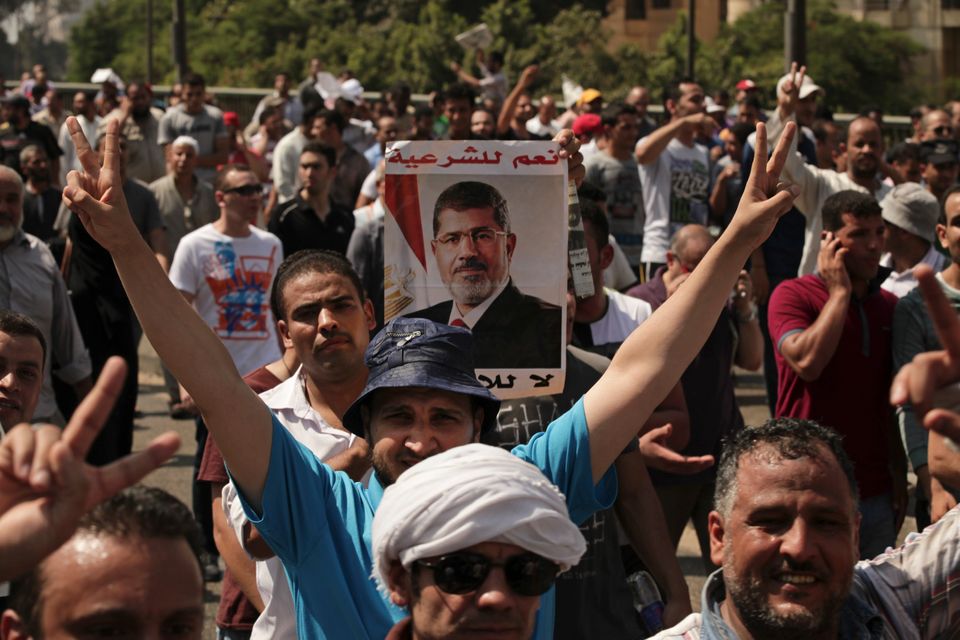 1 / 168
Supporters of ousted Egyptian President Mohammed Morsi march towards downtown Cairo from the Mohandeseen district of Cairo, Egypt, Friday, Aug, 16, 2013. Egypt is bracing for more violence after the Muslim Brotherhood called for nationwide marches after Friday prayers and a "day of rage" to denounce this week's unprecedented bloodshed in the security forces' assault on the supporters of the country's ousted Islamist president that left many hundreds dead. (AP Photo/Thomas Hartwell)
AP