When I was a kid my pals and I used to love elephant jokes like -- How many elephants fit in a Volkswagon? Four. Two in the front and two in the back. Or my favorite -- Why did the elephant paint her toenails different colors? So she could hide in the M&M's.

Back then with only a cartoonish understanding of elephants, it seemed preposterous to have elephants fit into human scenarios. Here was the largest land mammal, so removed from our daily lives, and the thought of trying to squeeze her in was ridiculously silly.

Today the world has grown smaller; the human population is expanding and exploding, and the elephants and their ancestral homelands are being systematically disregarded, discarded and destroyed.

Humanity's ability to travel the world along with our increased capacity to kill, have not been good for elephants and other living creatures. The desire for ivory carvings has made the price of elephant tusks skyrocket. Advanced weaponry, as well as the technologies which allow for night vision, have led to the dark road of genocide. We are witnessing wholesale slaughter of families and communities of an evolved species, as well as the death of thousands of rangers trying to protect them. These crimes are funding terrorism and weakening economies.

For just as we are beginning to really grasp elephants' magnificent complexities -- their highly evolved spiritual levels of compassion towards each other and other species, awareness, intelligence and memory we do not yet fully understand, amazing levels of communication, at that same moment they are disappearing at the hands of the basest among us, the greedy and ruthless.

Even as their ancestral lands are being used up by humans, elephants are perceived to be the encroachers by farmers and others who also want them eradicated as pests.

And the elephant has nowhere to hide. It is said in Africa today, the elephants, upon hearing a helicopter, try to hide under the trees, knowing their murderers sometimes come from the air. Other times they make barricades with their bodies to protect those wizened leaders among them, bulls and matriarchs, who have grown the largest tusks. They appear to be conscious of and know exactly what is happening to them. 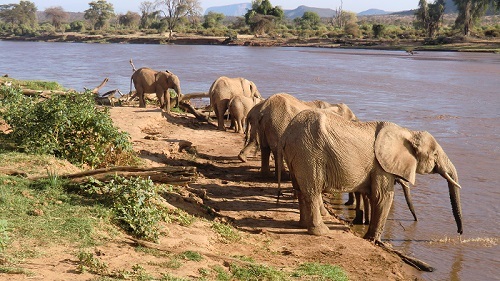 The elephants of Asia, already highly endangered from their unlucky interactions with humans, have also become victims of the organized criminal ivory trade. And those elephants already grabbed from their wild domains, the majority in chain and captivity, are made to be logging slaves, clowns or tourist entertainers, with lives of depravation and torture. Even those who are considered sacred in temples are beaten and made to stand in one spot chained for weeks on end.

In Western cultures elephants are also slaves to circuses and other forms of entertainment. They are torn from their mothers' sides, chained and made to perform most of their lives, with beatings and electrocutions to force them into unnatural acts.

As if elephants didn't have enough crises from every angle, there are those rich "hunters" in the West who would spend thousands of dollars purely for the pleasure of killing and hanging their heads on a wall.

So where is an elephant to hide from these unspeakable cruelties? And if released from these situations is there any room left for them on this earth?

Awareness and activism are on the rise but will it be enough? Slowly, sanctuaries are being created. Each country seems to have its particular challenges, based on the abuses and needs in the culture. In India, a leading-edge conservation and rescue organization, Wildlife SOS,has set up the first chain-free centers for elephants in all of India. They already have two successful sanctuaries. The great example of a few dedicated leaders helps animal advocacy to grow, as others take inspiration and example from them. But will we be able to stop this horror soon enough as our populations increase? 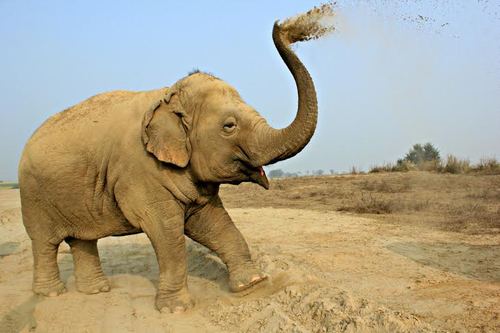 The elephant is no longer removed from our daily lives. Aware people must speak out and engage government leaders to act. Otherwise, when our grandchildren learn that E is no longer for Elephant, but for Extinction -- that we allowed the elephants and their habitats to disappear, there will be no place to hide. All we will have left are the jokes. And they aren't even funny.