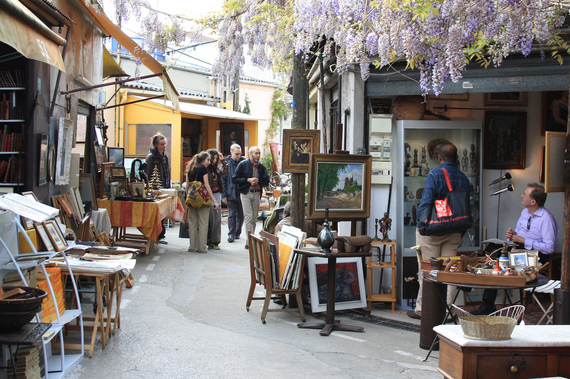 My two children and I had been driving in France in the region northeast of Paris all morning. Clignancourt wasn't our destination, but, as we approached the Porte de Clignancourt exit on the ring road, I urged my daughter, who was driving, to take it.

"I'm in desperate need of a ladies' room," I explained.

"Me, too!" she replied enthusiastically as she began pulling over to leave the highway.

Porte de Clignancourt, where we landed unexpectedly that day about six weeks ago, is a busy, crowded neighborhood, historically famous for its marché aux puces, the biggest antiques market in the world. More recently, this area at the end of Paris Metro (line 4) has become known for other reasons.

That day not long ago when Kaitlin, Jackson and I decided to drop in, we weren't thinking about the neighborhood's reputation, and we were in no mood for shopping. We had a simple, basic agenda.

Driving along the narrow rues with cars parked on both sides and people coming and going everywhere, we couldn't identify a likely place to make our pit stop. Finally, we came to an open spot alongside the sidewalk and pulled in.

Kaitlin turned off the engine, and the three of us looked up and down the street. Jackson, 14, stepped out onto the sidewalk and called up to the young man standing on the steps in front of his shop.

"Is there a bathroom my mom and sister could use anywhere near here?" Jackson asked in French.

The guy smiled and nodded his head. He pointed over his shoulder to the big open market area behind his shop.

"They can use the employee bathroom inside," he replied also in French.

Kaitlin and I, near bursting by this time, bolted out of the car, up the steps, and into the building behind where the young man was standing, then we followed the corridor in the direction he had pointed. Around and around, then down a flight of stairs, we came finally to the ladies' room. Kaitlin reached the door first, turned the doorknob, and pushed.

She looked back at me in panic and began running back toward the shop front, calling out to the guy as she got closer.

"Ah, so sorry," our new friend called back. "Usually there is an attendant. She must be taking a break. Wait a minute..." he said and then disappeared inside his shop.

A minute later, he was back with a key.

"Ah, no, sorry," he said, shaking his head and turning back around. "This is the key for the men's room. Wait. I will get the ladies' room key from my friend next-door..."

A few minutes later, he was back, this time with the ladies' room key, which he tossed down the stairs to Kaitlin, who caught it and then ran to where I was waiting outside the ladies' room. Kaitlin inserted the key and unlocked the door.

A few minutes later, feeling much more relaxed, Kaitlin and I began the walk back to the front of the shop, where we'd left Jackson.

"It was awfully nice of that guy to help us," Kaitlin said as we walked. "I don't know what we would have done if he hadn't found the key for us. I couldn't have held out much longer!"

"I was thinking the same thing," Kaitlin said.

As we turned the final corner, we saw Jackson and the young shopkeeper talking, laughing.

We returned the key, and I asked Kaitlin and Jackson to take a look inside the store to see if anything interested them. The shopkeeper stood on the steps with me while Kaitlin and Jackson did their shopping. My children's French is far superior to mine, but I tried to carry on some conversation with the nice young man while we waited. He asked if we'd been to Paris before, how long we were in the city, where else we were traveling...

The young man helped my son to find a bigger size for the T-shirt Jackson wanted to buy, wrapped up our purchases and walked the three of us down the steps to our car to point us in the quickest direction back to the Peripherique. Then he waved as we pulled away.

I've been traveling in Paris for more than 30 years, and I've visited Clignancourt and its marché aux puces dozens of times. Over the years, the neighborhood has changed, but I still look forward to every opportunity to return, no matter what the reason.