I'm not sure when I first heard of The Secret of Kells. Probably last year, likely through AICN, definitely way before it wound up on the Oscar nominee list for animated feature (and everybody started going, "The what of who?"). At that time, the buzz was growing around this small, exquisitely designed film out of Ireland. Who imagined it getting any further than a small band of passionate geeks?

I got to finally see it courtesy of my friend Russ, who imported a U.K. region DVD and through channels too sinister to mention (I may 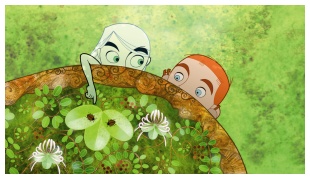 be exaggerating a bit), had it converted to a U.S. region disk. The distributors announced press screenings not too long after, but I still felt Russ was well-justified in going to all that the effort. Over at Cinefantastique, we like to champion films with "a sense of wonder," and The Secret of Kells meets that standard on nearly every front. Beautifully animated -- imagine the simple but expressive designs of Genndy Tartakovsky (Samurai Jack; Star Wars: Clone Wars) wedded to the elaborate illuminations of the Book of Kells -- and imbued with that rarefied magic that seems the sole domain of Ireland, the film well-earned its buzz, not to mention the Oscar nom and hopefully a growing audience as it is rolled out across the U.S. in the next few months.

I got to talk to Kells' Tomm Moore -- who directed the film with Nora Twomey -- a few days after the Oscar ceremonies, and we delved into matters both cultural and technical, as well as discussed the current state of the animation industry in Ireland. Click on the player to hear the interview.

More MMP on HuffPost:
The Exploding Girl and Tales from the Script
Jessica Jacoby and Felix Moeller on Harlan - In the Shadow of Jew Suss
The Art of the Steal Interview