The ingredients in some of the most popular energy gels and chews for endurance athletes may seem surprisingly familiar (and perhaps not in a good way): They're awfully similar to candy, with perhaps the occasional electrolyte or amino acid thrown in. But believe it or not, there's a reason for the marked similarities, and it's not necessarily a bad one.

Why gummy candy and a marathoner's fuel share so many common ingredients boils down to what happens in the gut when you eat these types of products. Sugar, in its various forms, is an easily digestible source of the carbohydrates the brain and body need to sustain physical activity. Before these types of products were available, long-distance runners and cyclists really did take candy along for the ride, explains Liz Applegate, Ph.D., director of sports nutrition at the University of California, Davis.

When you exercise, "you're using up your stores of glycogen, your body's stores of carbohydrates," Applegate tells HuffPost. The body replenishes these stores with glucose, some of which is naturally floating around in your bloodstream, but more of which you need to ingest in "whatever simple form of sugary carbohydrates will keep you feeling good," she says. 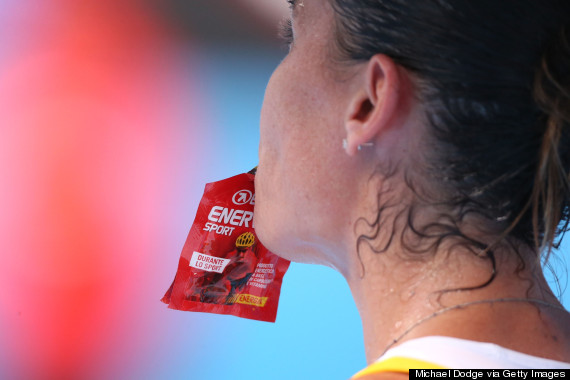 But that is by no means permission to fuel every three-mile jog with a Snickers bar. Athletes typically don't need to refuel during exercise that lasts less than an hour, says Susan M. Kleiner, Ph.D., RD, of High Performance Nutrition, LLC. (Water will work just fine for those activities, she notes.) The American College of Sports Medicine and the National Academy of Sports Medicine recommend getting 30 to 60 grams of carbohydrates per hour of physical activity. And that even includes weightlifting, as long as it's high-intensity, since "the higher the intensity, the more carbohydrate you're burning," she says.

Athletes competing in even longer events -- say, something lasting three to five hours, or more -- can benefit from 60 to 90 grams of carbohydrates per hour of activity, says Applegate.

Aside from their simple carbohydrates, chews and gels are also convenient to transport for athletes who, understandably, don't want to carry around extra bulk while competing. These products also aim to taste good: Manufacturers put effort into concocting the perfect "mouthfeel", says Kleiner, who is involved in developing a new sports nutrition product for women. Most product lines on the market boast six to 10 flavor varieties, from citrus and berry to chocolate and peanut butter.

"Some of the strategy [for manufacturers] is that the athlete is looking for a reward," Kleiner says. "These things play a role in helping you get the mental motivation to keep going." Sports drinks don't always have the same effect, she says, as many of the athletes she's worked with express a desire to chew their sustenance.

Not that race day is the time to first bite into an endurance-boosting morsel. "People have to experiment with it," says Applegate. "They need to be training with it." At first, athletes may experience some stomach upset as they get used to eating while exercising, but the gut's response -- just like that of the heart, lungs and muscles -- is trainable, she says.

Thinking about trying out gels or chews? Keep in mind that you probably won't even need them until your training plan calls for workouts lasting around 75 minutes, says Pamela Nisevich Bede, MS, RD, CSSD, LD, of SwimBikeRunEat.com. And don't be afraid to go through some trial and error with different products until you find a brand you feel good with. Then experiment with different flavors within that brand, she suggests. If you're training for an upcoming race, investigate what kinds of fuel the race will offer along the course, and see how your body responds to that during training. "On race day, if you can stomach that, you don't have to carry as much with you," she says.

So what should you look for in an endurance product? First things first: "It's best to pick a product that shows multiple sources of carbohydrates," says Applegate. "You're able to uptake a bit more carbohydrate per minute and that really makes a difference in longer events." On labels, that might look like the starch maltodextrin and fructose, or evaporated cane juice and fruit juice, or honey and tapioca syrup.

The problem, however, is that manufacturers don't always have research to back up their products' claims, Kleiner says. They may borrow science on just one of the ingredients and promote that ingredient's benefits as perks of the product as a whole, when in a particular combination, that ingredient may not work the same. "To think about how much real science is behind a lot of these products ... there's often not," she says.

Many also have incredibly long ingredients lists that contain more than just simple carbs and electrolyte-replacing salt, making it hard to decipher what it really is you're eating. We looked at the ingredients lists of a handful of the most popular endurance products and asked the experts to put some of the most confusing contents into categories we can understand. 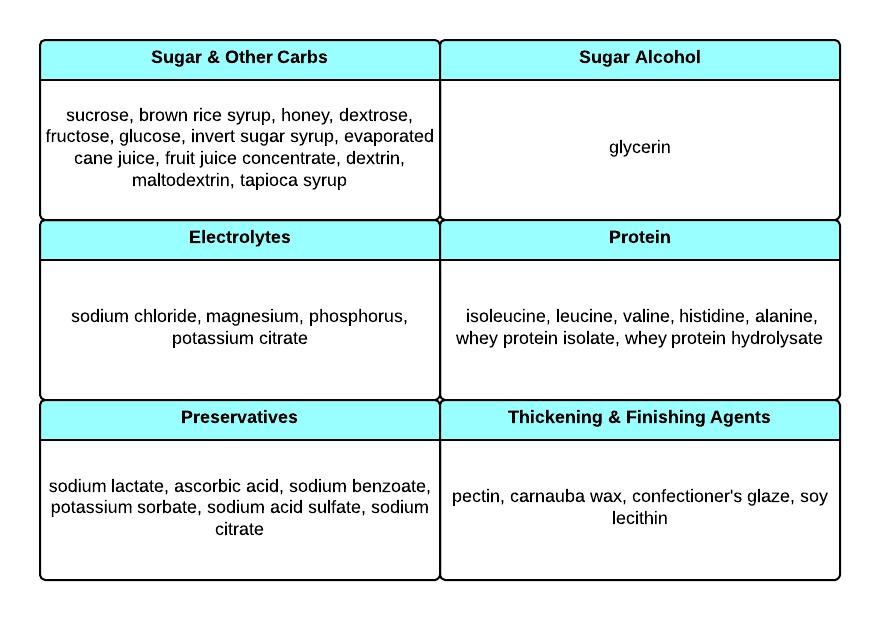 While typically here at Healthy Living we'd advise avoiding processed foods with more than five ingredients, the experts say ingredients lists in this scenario should not be a source of stress.

For one thing, some of the ingredients you might typically shy away from do still offer some benefits. Potassium sorbate, for example, is is a preservative. But it's also a source of potassium, an electrolyte lost through sweat during exercise. Not to mention, "you do want to prevent the product from breaking down on the shelf or while you're jogging," says Bede.

For those who would still prefer something less processed, honey can do the trick, as can dried, or even fresh, fruit, says Applegate. (Though these may be a bit more challenging to transport, and fruit can be tougher on the intestinal tract.) "Definitely work on getting [processed] foods out of your diet the rest of the days of the week," Bede says, "but when it comes to fueling when you're 20 miles from home, I say go with what's easy and convenient."

More:
healthy livingrunningFitness and Exercise sugar
Newsletter Sign Up
The essential guide to taking care of your mind and body
Subscribe to HuffPost’s wellness email
Successfully Subscribed!
Wellness delivered to your inbox