America just celebrated the season of giving with Hanukkah and Christmas presents, year-end charity donations and soup kitchen volunteering. It is a time when Americans demonstrate the generosity, caring and kindness that define them as a people.

Now, however, Americans may suffer the season of GOP taking. Republicans already insisted on taking away a key protection in the Dodd-Frank Wall Street Reform and Consumer Protection Act. Now they’re intent on taking health insurance from millions of Americans who got it under the Affordable Care Act.

The Affordable Care Act (ACA) is a manifestation of Americans’ concern for each other’s welfare. Americans felt it was intolerable for so many of their friends, neighbors and relatives to be uninsured in the richest country in the world, to be bankrupted by medical bills, to die for lack of medical care. So they found a way to do something about it. That is the ACA. Among other benefits, it extends Medicaid and provides subsidies enabling the working poor to afford insurance. But the GOP is all against it. Republicans tried to repeal the law, appealed to courts to overturn it and refused its expansion of Medicaid. As they become the majority party in both houses of Congress this month, Republicans will intensify their campaign to take health insurance from millions who got it through the ACA. 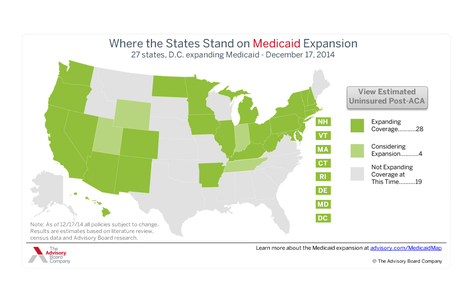 Just as the employer mandate requiring large businesses to offer health insurance finally goes into effect, Republicans will try to eliminate insurance for those newly-covered workers.

They’ve promised to vote to repeal the Affordable Care Act – again. None of their previous 50 votes to do that succeeded. Failure is likely again, too, since they won’t get 60 ayes in the Senate and President Obama won’t sign a repeal. So they’ve said they’ll next try killing the law piece by piece.

Unlike their congressional votes, Republicans have been tragically successful with lawsuits in denying Americans health insurance. The first of those suits that went to the U.S. Supreme Court didn’t kill the law outright but empowered Republican governors to prevent poor constituents from getting health insurance through the law’s Medicaid expansion. Millions are suffering as a result.

New statistics show that if the Supreme Court had not made expansion of Medicaid optional, more than 3 million people would have gained health insurance in the 24 states where Republicans refused the program. These 3 million are working Americans struggling on the financial edge, people whose income is less than $16,105 a year.

A new Republican-pushed lawsuit could take insurance from 5 million more. These are residents of states that decided to use the federal health insurance exchange instead of creating marketplaces of their own. People who now buy insurance on an exchange, state or federal, may receive subsidies to help them afford it if their income is up to four times the federal poverty level.

In the lawsuit, King v. Burwell, Republicans argue that language in the Affordable Care Act means that only people who buy their insurance on a state-run exchange qualify for the subsidies. The GOP wants to discriminate against people who get their insurance through the federal marketplace. They want to deny the ACA’s financial help to the working poor in 36 states without their own exchanges.

New federal information shows that 87 percent of those who buy their insurance on the exchanges receive subsidies. And a review by the private consulting firm Avalere Health showed that, on average, the subsidies paid for three-quarters of the purchaser’s insurance premium.

If the Supreme Court hands Republicans a win in this case, millions will lose their insurance because they can no longer afford it. These are people who got insured with the help of the ACA, and who will lose it on the demand of the GOP.

In another lawsuit, 36 Republicans in Arizona are trying to take Medicaid away from poor residents who got coverage in the expansion pushed through by Gov. Jan Brewer – yes, a Republican. Like several other Republican governors who accepted the expansion, Brewer was swayed by doctors and hospitals that prefer to treat insured patients rather than deny care or provide it for free.

But the three dozen Arizona Republicans, represented by the conservative Goldwater Institute, contend the expansion is illegal because it will be partially paid for by a levy on hospitals. Last week, the state Supreme Court said the case could proceed. If the GOP wins, it will take insurance from a quarter million Arizonians.

Maine is just the opposite. There, low income people never benefitted from Medicaid expansion because Republican Gov. Paul LePage vetoed it. Five times.

The most recent Congressional session was the second least productive in the modern era—exceeding the previous poor record by one piece of legislation. Now, however, with Republicans in control of both houses of Congress, a new low is promised.

Instead of passing positive or helpful or useful legislation, the GOP has pledged to take from the American people. It vows to take away a basic necessity – health care, to ensure the uninsured suffer.

That’s a promise that Americans must ensure is broken. For their own health. For their neighbors’ well-being. And for preservation of Americans’ self-image as caring and kind people.