A dispute between the two candidates vying to replace disgraced Rep. Michael Grimm (R-N.Y.) escalated on Tuesday, with the campaign of Democratic candidate Vincent Gentile accusing Republican Daniel Donovan of “doubling down on race-baiting."

The comments were a response to a fundraising email that Donovan’s campaign sent to supporters last week with the subject line “Al Sharpton Coming After Dan, we need your help!."

After the death of Eric Garner -- the unarmed black man who died in July 2014 after being put into a chokehold by a white police officer in Staten Island -- the Rev. Al Sharpton led large protests on the island, where he is an unpopular figure among the borough’s largely white and conservative population. Donovan is the Staten Island district attorney who presided over the grand jury investigation into Garner’s death. Although the chokehold was caught on video, the grand jury returned no indictment against the officer. The campaign email quoted a member of Sharpton's National Action Network criticizing Donovan.

Gentile’s campaign quickly derided the email, saying Donovan owed the public "an apology for race-baiting." On Sunday, Donovan denied that the message had been intended to stoke racial tensions.

“I don’t think anyone should put race in the race, for lack of a better way of saying it,” Donovan told reporters on Sunday, according to The New York Observer. “Race has nothing to do with this election.“

“I would hope that people would respect that Eric Garner’s mother lost a son, his wife lost a husband his children lost a dad,” Donovan continued. “And I hope that no one would use his death and the tragedy and circumstances surrounding that in a political election.”

Gentile’s campaign shot back Tuesday that Donovan’s remarks were proof that he wasn’t fit for office.

"The only thing more disgusting than race-baiting is doubling down on race-baiting,” Gentile campaign spokesperson Justin Brannan told The Huffington Post in a statement. “But sadly these are the types of deceptive and unsubstantiated tactics a desperate candidate with zero legislative experience and a do-nothing record will employ.”

“It’s not only hateful, but it's insulting to the voters," Brannan continued. “The hardworking people of New York's 11th Congressional District deserve better than this -- they deserve an open and honest debate on the issues that matter and they deserve a leader, not a demagogue calling shots from the same tired and divisive national Republican playbook."

With less than a month and a half left before the special election to replace Grimm -- who resigned in December after pleading guilty to tax fraud -- Garner’s death remains a contentious issue in the campaign.

"I join in the chorus of disappointment with the court's decision today to keep sealed the records from the Eric Garner grand jury case,” Gentile said in a statement, adding that “had the court decided to release to the public the Grand Jury's transcript along with the instructions the jury was given and the evidence that was presented, I believe the wounds we are still tending to could have been softened."

Donovan, whose office had argued in court against the release of the records, called the judge’s decision “well-reasoned.”

Gentile has also specifically attacked Donovan for his handling of the Garner case. When the grand jury declined to return an indictment, Donovan simply issued a press release “on a Friday afternoon," Gentile said in a recent interview with HuffPost.

The Democrat, who is himself a former prosecutor and assistant district attorney, said he would have handled the announcement differently. 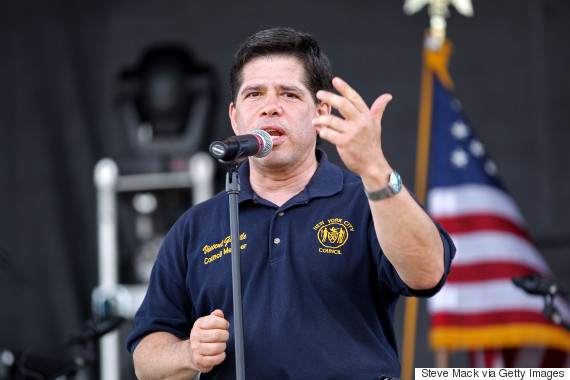 “The fact that they got nothing about the [grand jury] process,” Gentile said, “contributed to the destruction and the tension that was caused around the country.“

However, Gentile has always stopped short of saying whether the grand jury should have returned an indictment.

The candidate added that there should be more transparency when it comes to high-profile grand jury cases in which the identity of the defendant is already known, as in the Garner case.

Gentile is considered the underdog candidate in a largely conservative district that is home to a significant number of police officers. Although he’s opposed to a number of police reform bills currently pending in the city council, Gentile said that if elected to Congress, he would work to mend the relationship between police and communities of color in Staten Island.

“When I’m congressman, I’d work with Councilwoman Debi Rose and state Sen. Diane Savino and really do an outreach and a type of communication that is not for show, it’s not for public display," he said in the interview, referring to local Staten Island lawmakers. "It is behind the scenes. A kind of real dialogue that goes on where things can be said that might not be said out in public.”

The special election is scheduled for May 5.