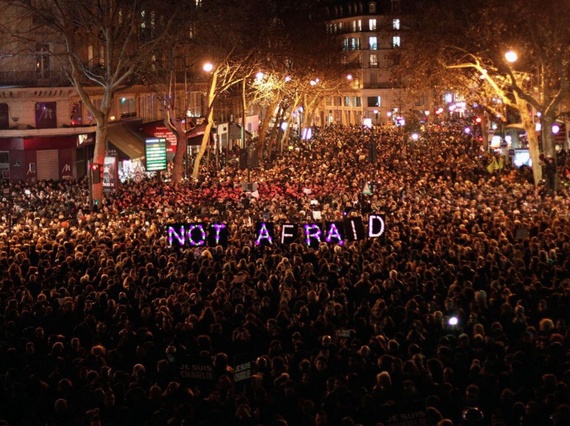 What is the world coming to?

The sun is shining brightly over the Swiss Alps as I write this post. It's calm and peaceful, and my kids are all out.

Three things happened in the last three days.
One, my son, who is in remission from stage 4 cancer, turned 8.
Two, a friend I know from the hospital spent her last night holding her terminally ill young daughter as her life slipped away.
Three, some people in Paris decided to kill others who were armed only with pencils.

Today, as I write this, a massive man-hunt has ended with the terrorists dead, taking even more innocent people along with them. And the world is reeling.

And several people around me are saying: what is the world coming to?
What kind of world are we leaving to our children?
I think of my joy at being lucky enough to having my kids still with me, my friend who was not lucky, and I feel such a conflict of emotions, but it all comes back to this question: is there not already enough hurt and injustice from life itself without human beings having to add to it?

I think of my three boys, and the question hovers in my mind... What kind of world are we handing over to them?

Most people agree that on September 11th 2001 the world changed. Wherever you were that morning, in whatever way you found out about the terrorist attacks, you were, like everyone else, stepping into a new reality. The sun rose on September 12th to a new and different world.

If you watch the TV show Friends, you can see an episode where Rachel waits at the arrival gate for Ross' flight. She is standing right there, next to where the passengers are coming off the plane. Not waiting outside in the arrival area, but right at the gate. That seems like something that used to happen so long ago, and yet...

Remember greeting people as they deboarded? Remember waiting for their suitcases together? Remember when you could pack all your belongings into a carry-on and didn't have to double check whether lipstick is considered a liquid or not?
Remember the first time you heard that there is a terrorist organization called al Qaeda and wondering how to pronounce that?
Remember when a young man with a big back-pack on a subway train would be a normal non-frightening sight, and in fact make you reminisce or maybe daydream about adolescent trips backpacking around Europe?

Do you know that our kids think it's not unusual to have terror alert levels? Our kids have grown up in a world where it is assumed that there are people who want to destroy them.
We, who were not born into that world, still find it surprising. When a terrorist attack occurs, there is a part inside us that is still shocked. That still wonders how it can be possible.
But our kids are not surprised. They know it was not always like this, but the way it "used to be" is in the past with black and white TVs, record players, DVDs, maps, phones that had cords and hula hoops.

But here is the really interesting thing I suddenly realize. The incredibly cool thing, actually. And the thing that will give you hope when you ask the question: what is this world coming to?

Our kids are surprisingly not afraid.

They have seen the terrorism and the radical groups attempting to wreak havoc. They have watched TV on days like yesterday when it feels like everything is on hold until the crisis ends. They have grown up with the word terrorism being a common term, not something that just happens in movies.

But are they fearful for their future? No. In fact, they are taking control in a way that is historically unprecedented.

Social media now has more of an impact and influence than old fashioned media or cultural norms ever had. The fact that news is immediate and that each individual has a role in creating and sharing the news is a game-changer.

The two men who attacked the satirical magazine Charlie Hebdo were probably hoping to see themselves all over the news. Instead, people seized on the "Je suis Charlie" logo and it went viral.

Three days ago, 12 people were murdered by these two terrorist who probably thought they were accomplishing some objective of limiting free speech through fear and scaring people into submission.

But by the end of the day, more than 100,000 people had risen up and joined in massive rallies around France to demonstrate their support for freedom of speech and their condemnation of terrorism. The majority of these people were under age 30.

This attack probably took months of planning, but within only a few hours, today's youth had turned the tides of where this story was going.

They are not afraid because they have control that we didn't have when we were kids. It's not just the simple fact that they can quickly organize massive demonstrations; it's the way something can be communicated. A photo, a hashtag, these have become more than just images and words; they can communicate a philosophy, an ideal, a goal, a satirical jab.

My kids are not afraid. They have that youthful arrogance that allows them to feel invincible. When I see the photo of all the people gathered in Paris holding their "Je suis Charlie" signs, I feel that it's going to be ok. There have always been some crazy people who want to only cause destruction and pain.

The only way to win is to stand up.

So, what kind of world are we handing over to our kids? Asking that question is like asking what train to take when your jet has already taken off. We're not handing anything over. They have taken it, and are running with it.

And I'm all in for the ride.