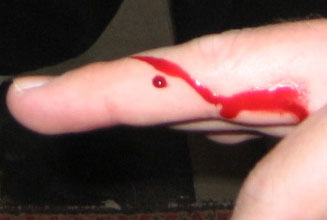 after being attacked by a New York Times

It was a stunning, painful sneak attack that landed me in the emergency room of the U.S . Army's hospital in Baghdad's Green Zone.

The attacker: Scratch, one of The New York Times' Baghdad bureau dogs, whose vicious bite opened three deep gashes in my right hand, sending blood spewing in all directions.

After being treated by medics at the New York Times bureau, I spent hours in the Combat Support Hospital's trauma center surrounded by mangled Iraqis, including a 10-year-old boy and a 50-ish man, both of whom were so badly burned and disfigured I doubt they survived.

In the midst of such misery and sadness, I defied U.S. Army doctors' orders to remain overnight in the hospital and, instead, fled after getting a tetanus shot and being x-rayed, cleaned up, and bandaged.

I downplayed it at the time, thinking it a freak, one-off nip in a country where there is genuinely horrific bloodshed every day.

Beyond that, when New York Times correspondents told me they were considering euthanizing Scratch because of the attack, I pleaded with them to spare the dog's life, which they did.

Last month, a New York Times correspondent told me one of the bureau dogs bit an Iraqi in the crotch and attacked photojournalist Mike Kambers in the chest (if a dog bit me in the crotch, I might be inclined to euthanize it on the spot).

The New York Times correspondent assured the bureau's compound had finally been cleared of all dogs.

Now, weeks later, we learn of the dog attack involving Blackwater at the Times' Baghdad compound.

The New York Times' Baghdad bureau is renowned for its superb reporting, its unrivaled bureau quarters, and its scrumptious food.

It's now infamous for its attack dogs.

Eason Jordan is the chief executive of Praedict and its IraqSlogger news service.