If you're on Facebook, you probably have at least one former high school classmate who seems to never stop overloading your News Feed with crazy political rants or unnecessarily personal life updates. Perhaps you've thought about unfriending this person, or even gone ahead and pulled the trigger. To those of you, we say: You are far from alone.

In reality, it appears former high school friends are unfriended more than any other group on Facebook, according to a recent study by Christopher Sibona, a doctoral student at the University of Colorado Denver. For the study, Sibona separated Facebook friends into 15 distinct "types" -- neighbors, church friends, friends of friends, etc. He then surveyed 1,077 people online to figure out who they unfriend on Facebook and why. The findings were presented at the Hawaii International Conference on System Sciences in January.

Sibona, who studies information systems, found his survey participants by searching for people who had publicly complained about being Facebook unfriended on Twitter. He then asked them the last person they unfriended and the last person who unfriended them. Old high school classmates topped both of those lists, as you can see in the table below: 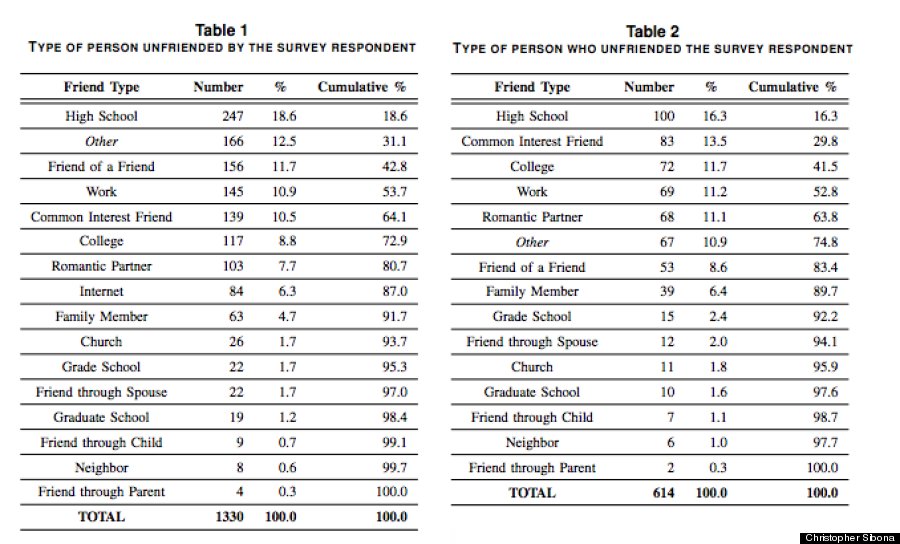 High school friends have Facebook-official splits for the same reason they stop talking in real life: They drift apart, in one way or another. Respondents who said they recently unfriended someone they went to high school with indicated that the person they unfriended tended to either publish frequently about "polarizing" political or religious topics or update their Facebook with "unimportant," trivial posts.

In both cases, the unfriender found the unfriendee's posts about politics or daily life no longer relevant and decided to take the decisive action of deleting the friend rather than simply blocking the person from News Feed.

Of course, you can be unfriended for reasons entirely unrelated to Facebook. Work friends are another commonly unfriended type, but here the researcher found that when colleagues hit "Unfriend" on Facebook, it usually due to "non-computer-mediated" behavior. That is, problems in the workplace rather than problems on Facebook.

The truth is, Facebook doesn't want you to know who's unfriending you. For a while, there was a popular program called Unfriend Finder that would notify you when you've been unfriended. It worked well, until Facebook shut it down in May of last year.

Perhaps Facebook's paternal actions are for the best. When it comes to Facebook unfriending, ignorance may be bliss.