Five years ago my life changed because of another person's decision to write four words on my 2002 Volkswagen Beetle. They read as follows, "fAg" "u r gAy."

Rather than remove the graffiti, I decided to leave it on my car for 365 days and make a documentary titled, Fagbug about the adventure. After driving with the graffiti for the year, I decided to give the car a colorful makeover. Being so visible has brought me both a sense of accomplishment and failure. Whoever wrote on my car was attempting to communicate something to me however I wasn't there for the conversation. Despite much criticism of my motives, every decision I've made with fagbug has been an attempt to communicate back to that person.

There's a real longing for verification that what I've attempted to say has been heard. For example, the end of the movie is dedicated to the person who vandalized my car and ringer t-shirts with their handwriting were created in honor of their artistry. One says "fAg." The other says "u r gAy." Twenty-six-year-old Steven Conley from Middletown, Ohio, put it nicely in an email he sent to me last week that read, "In many ways, we are all like cars now and you are a can of spray paint. Each person that joins your cause is branded by you and the shirts are like the cars. We wear them in remembrance of all you went through and all you believe in." It's surprising to me that no one has come forward claiming royalties for sales from the t-shirts, movie, or other merchandise. 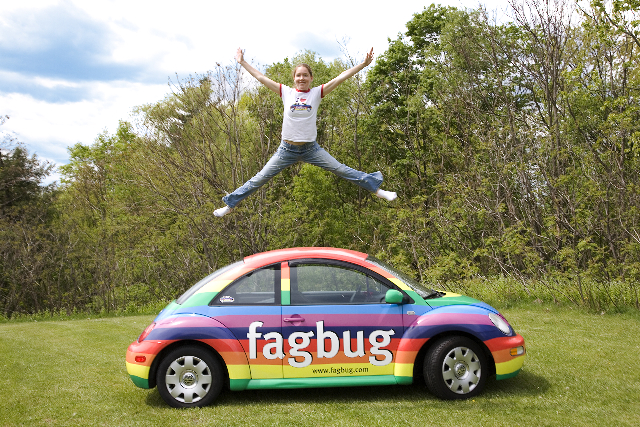 People often ask me what would you say if you met the person? I feel I've said so much without saying anything at all. I've been able to travel the country, meet thousands of people, and make a successful film people email me after viewing and say things like:

"Hey, I just wanted to say that I really enjoyed your film and am amazed by your courage. I am a heterosexual man and have used ignorant slur's to describe homosexuals in the past. I would like to apologize to you and everyone else and will make sure I teach my children to be more understanding than I have been. I hope you continue to teach."

"Ok, I get it, people get vandalized, how about the blacks, the Hispanics, the whites that get looked over because their not a minority, shut happens, welcome to planet earth... It sucks, I break my back and bleed every day to make a buck for my family, but because I'm the "majority" I will ALWAYS be looked over, fuck you." -Shadd

There's a constant dialogue happening around fagbug whether its through email or picture-taking, waving or honking, being called names or laughed at, receiving notes or money, being asked to move out of parking lots or getting harassed by cops, being egged or keyed, spit or written on, starred at or flipped off, sexualized or idolized. So why does it feel like something's missing? Is it because I've never been given the chance to have a real-time conversation with the person who did it? My movie is a version of myself captured in time from several years ago. Maybe I should practice for when the time comes?

How did you know I was gay? I've never been one to put stickers on my car, but after driving my new, well used, but new to me, bug for a year, I saw the rainbow sticker at a tulip festival and thought it would look so cute on my new bug. I never thought it would bring the two of us together but am so glad it did! How were you so smart to know I was gay when I didn't even know it? When I thought about what you said, I thought to myself, ah, now it all makes sense! The naked showers, holding hands, kissing, saying I love you with my female "friends." Who was I kidding all these years? You were right and it was time I faced the truth. Being out of the closet now because of you has been life changing. It took someone like you, a total stranger, to talk some sense into me and get me to realize what I was afraid to face all along. Thank you for opening my eyes!

I had never been called a fag before, so that part threw me off, but the more I think about it, the more I think you're right about that too! I'm quite comparable to a cigarette. I feel people sucking all the time and often get discarded and thrown away after people get what they want out of me.

Also, I think you've inspired a lot of people by what you did. Some people want to have a positive impact on others but aren't sure how to go about it. You showed them the way. If when you write on someone's car, the person gets to travel the country, make a movie and meet thousands of people, I think many more people will vandalize cars because of you. If this is what comes from a little message written on a car, why wouldn't everyone do it? I bet you thought to yourself, "I'm going to enlighten this person, and bring them to their full potential." Congratulations! What you set out to do worked!

Thank you for this much needed therapy session. Based on my psychic powers I think you're a gay fag too. Most people are. Takes one to know one! It's too bad you were so slow in getting back to me. I had a feeling for a while that we could've had a love connection. You missed your opportunity though. I just got married this past September. Guess you snooze, you lose. Hey, by the way. What's your number? Let's do this again sometime!

Creator of the documentary, 'Fagbug'