Fed Chair Janet Yellen all but confirmed the Fed was ready to raise interest rates in December. She made her case for raising interest rates in a speech on Wednesday at the Economic Club in Washington. "Ongoing gains in the labor market, coupled with my judgment that longer-term inflation expectations remain reasonably well anchored, serve to bolster my confidence in a return of inflation to 2 percent as the disinflationary effects of declines in energy and import prices wane," she said.

This is while the latest labor productivity stats show productivity is improving, and wages are finally rising above the inflation rate, which is a necessary condition for continued growth. But a rate hike at this time could make it more difficult for consumers to spend their new found wealth. They might decide to save more instead, at a time when businesses are also saving more and investing less in increased productivity.

The Fed's favored inflation index isn't back to their 2 percent target. Nor is the labor market at full employment. In fact, Yellen said

In October, almost 2 million individuals classified as outside the labor force because they had not searched for work in the previous four weeks reported that they wanted and were available for work. This is a considerable number of people, and some of them undoubtedly would be drawn back into the workforce as the labor market continued to strengthen. Likewise, some of those who report they don't want to work now could change their minds in a stronger job market. 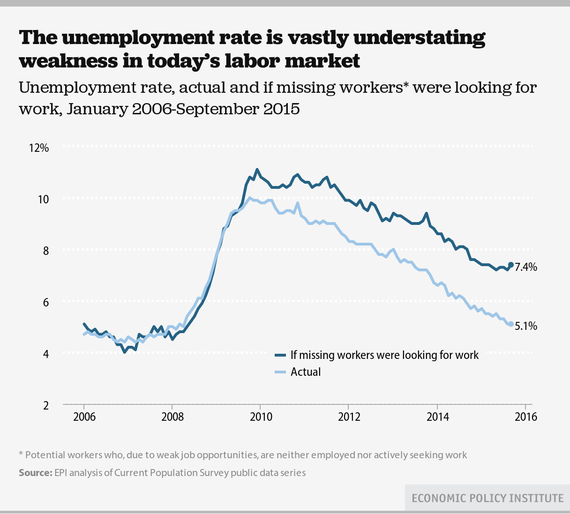 But even her estimate of the unemployed may be low. The Economic Policy Institute estimates some 4 million working age adults are neither employed nor actively looking for work. In fact, if added back into the labor force, they would raise the unemployment rate to 7.4 percent, far above the Fed's employment target.

Then why begin to raise interest rates now? Wouldn't that cause businesses to borrow less, and hence invest even less in capital expenditures, thus hurting future employment growth? Yellen cautioned against delaying a rate hike for too long, saying it may force the U.S. central bank to tighten "abruptly." Holding rates at its current level near zero also risks "excessive risk-taking" by investors, she noted.

So the Fed may once again be attempting to deflate an asset bubble. But are stock and bond prices, as well as housing, in bubble territory? Businesses are not over leveraged, with corporations hoarding some $5 Trillion in cash and other liquid assets worldwide. The last time the Federal Reserve (with Fed Chair Alan Greenspan) began to deflate a bubble resulted in the Great Recession.