In the opening scene in Jessica Elisa Boyd's profoundly moving new short movie, Art in Heaven, we find her protagonist, William, an Anglican priest, in a life-or-death crisis at the edge of a large body of water. At the end of the scene, in which we are invited to share his inner conflict in the vast and inscrutable context of nature itself, he reluctantly chooses life, flinging into the water instead his purple chasuble--the stole that is the symbol of his priestly office and his relationship with God. 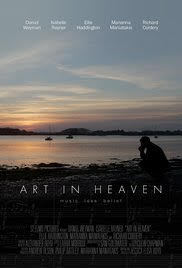 We shortly discover the cause of his distress: the death of a child and the alienation from his wife. William's worldly-wise bishop re-assigns him from his city post to a parish deep in the Suffolk countryside, offering him a period of respite in which to find redemption. His tentative welcome there includes--in one of the movie's delightful, chuckle-inducing asides--a table in the rectory laden with a plethora of home-baked cakes; but he is left with a feeling of deep disconnection, from his own family--his sister and their mother--his wife, his congregation, and his God. And not least from himself. It is astonishing that Boyd manages to weave so complex a web of emotional connections in so brief a time.

In a crisis of faith, William, is now given to struggle with the religious beliefs that led him to the priesthood. How to believe in a supposedly merciful God who condones such tragedy in the life of one who has devoted his life to His service? This is, of course, the perennial and ever insoluble dilemma of Christianity. But Boyd's film transcends the purely religious question and asks us to consider the necessity of faith to the work of simply being a human being, in a world that is often unkind, and sometimes outright cruel.

William finds his redemption in part in mystery, in part in music. A young woman appears at the piano in his church, rehearsing a beautiful sonata by Edward Elgar. He soon takes to listening to the music, rapt, and learns from this "angel" to listen to his own deeply wounded heart. Inspired by her, he begins to reconnect with his congregation, with his faith, with nature, and with life, and finds himself able to commit himself to his pastoral work, and to this new parish which had seemed to him at first an exile. It is only in the last scenes that we learn that the young pianist was nothing but an apparition: she had died some years before, the victim of a family tragedy not unlike William's own...

Boyd excels at exploring the inner life of her protagonist with both insight and compassion. As myself the son of an Anglican priest who struggled with his faith, I found in William--played with quiet authority and conviction by Daniel Weyman--a persuasive portrait of a thoughtful, sympathetic man confronted with tormenting doubts about his life's choice to serve God. In the broader context, Boyd uses her cinematographic medium to paint the glorious, marshy landscape of that part of England, evoking the mysterious, profound relationship between man and nature in the same way as, say, Thomas Hardy managed to do in a different corner of my own home country. She has created a film that invites us to contemplate the human need for faith in, and commitment to something greater than our own small lives, even as it moves us with its compassion and reminds us of the amazing beauty that surrounds us everywhere.