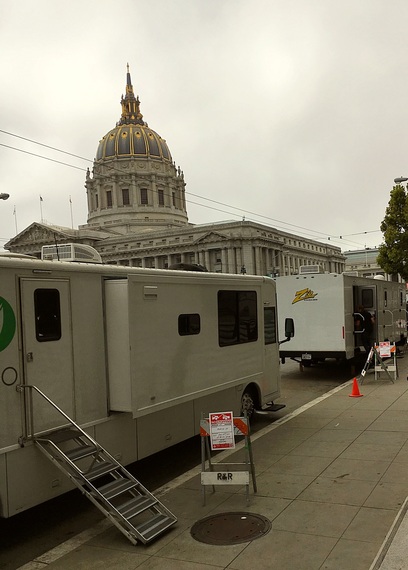 Now, I know we usually say "Action" after lights and camera. But who stands behind the camera, operates the boom mike, and powers the whole production? Workers with great middle class jobs, 170,000 of whom live right here in California.

When we think of film production, we picture the biggest names with the biggest paychecks like the actors and directors whose names come first in the credits. But behind the camera, there are dozens, and sometimes hundreds of folks who are crucial to making a successful movie (or TV show or commercial), and those folks play an even more important role in our economy.

Film production pays an average of $89,000 for production workers (the aforementioned camera operators, grips, electricians etc.) and $106,000 in the post-production side of the industry (such as editors and special effects artists). These are solid, middle-class jobs that form the basis of a $30 billion dollar industry in our state.

Approximately half of the nation's film industry jobs are located in California -- but we are under enormous pressure from places like British Columbia and Georgia, which offer lucrative incentives for film productions. California needs to fight to keep film production located right here in the Golden State, because we are losing our share of the market to these other locations. And one of the best tools we have for keeping production in California is the Film and TV Tax Credit Program 2.0, administered by the California Film Commission, of which I am a board member.

This $330 million annual tax credit program is vital for our economy because it directly attracts and preserves in-state production jobs and related spending. Tax credits are provided for a range of productions, including feature films, TV pilots, new TV series, made-for-TV movies, mini-series and existing series that relocate to California. The California Film Commission recently approved the first round of television projects for the 2016-17 fiscal year. Among the projects on the list is the latest relocating TV series -- ABC's American Crime anthology -- which is moving production from Austin, TX to California.

Credits are allocated using a "Jobs Ratio" ranking system that selects projects based on wages paid to the production crew, along with other criteria. The application process is rigorous, so as to ensure each production has solid financial backing and stipulated in-state spending, employment, filming locations and other key logistical information.

In the latest allocation, 11 productions were approved for a reservation of tax credits. These projects are estimated to generate approximately $464 million of direct in-state spending, against a modest investment of $65 million in tax credits. This represents a huge return on our investment, and it demonstrates the profound value of California's Film and TV Tax Credit Program 2.0.

When I was a County Supervisor in San Francisco, we had a number of productions shoot in the City, and each one brought energy, excitement and economic activity to the neighborhoods where they filmed. In fact, I earned my SAG (now SAG-AFTRA) card by appearing as an extra in three different productions that were filmed in San Francisco. I saw first-hand the kinds of well-paying, middle class jobs that film production creates. I supported San Francisco's Film Tax Credit, and I was a coauthor of the original Film and TV Tax Credit when I was in the Assembly. We need to keep those jobs, and the Film Tax Credit Program is an essential way to keep the production industry here in California.