B-Cycle's web site is slick and almost too pretty - exactly what you might expect from a collaboration between the Trek Bicycle Corporation, Humana and hot-shot ad agency Crispin, Porter & Bogusky.

But don't be turned off - B-Cycle's snazzy video and smooth voice-over may be exactly what bike sharing needs to boost it from a European phenomenon seen on the streets of Paris and Barcelona to a bona fide solution for countless American cities.

Because the Age of Auto - that golden era in which we paved over a lot of the planet in thrall to the almighty personal freedom machine - will eventually be over. As population and cities expand, it will become clear that not everyone can own a car.

And guess what? It won't be as horrible as you might be imagining. As B-cycle's video makes clear, the average commuting driver spends 50 hours per year stuck in traffic. Giving that up won't hurt one bit. 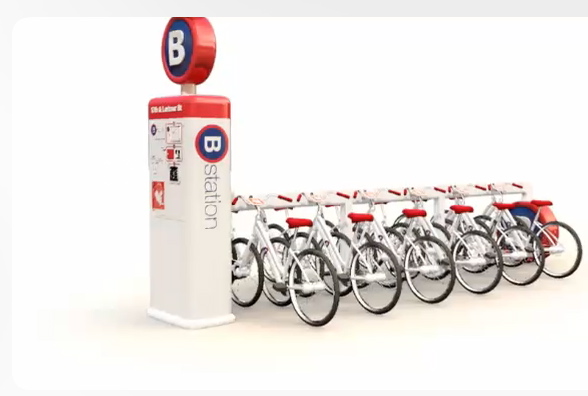 And B-Cycle, according to its backers, can be scaled up or down for any sized city. At the web site's B-effect page, tapping in a zip code gives a visitor a picture of how many stations and how many bikes that area will need. It also spits out statistics on how much carbon emissions can be averted, and how many calories can be burned by citizens ditching their cars for b-cycles.

B-cycle is thus far a little shy on pricing details - and no word on how the system will avert some of the theft and vandalism that is haunting Paris' Velib. RFID, perhaps?

Also, it isn't clear which city will get the first B-cycle system - the web site is gauging interest by letting users plot their desired cities onto a map. Thus far, Miami seems to have the biggest passion - perhaps because it is Crispin's hometown? Vote for your own burg here.

But right now it doesn't matter who will be first - it's just greatly refreshing to see some American flash and dazzle around bike sharing.