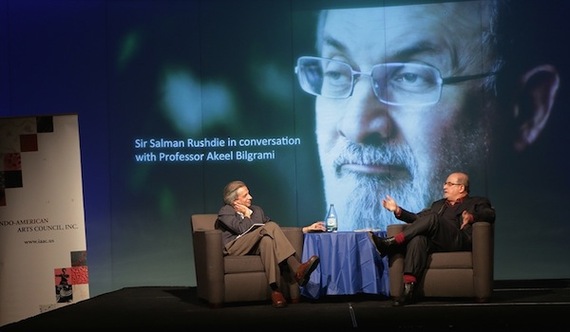 In collaboration with The South Asia Institute and India Abroad, the event was bookended with opening and closing receptions at the landmark Smithsonian National Museum of the American Indian on Bowling Green.

My first workshop, moderated by Berkeley's Angana Chatterji, was Unpacking the Empire: Colonial Histories and Modern Interpretations. This featured fiction and nonfiction that draws upon the sub-continent's colonial history, yet situated it within the context of a contemporary and modern region; and one that in some ways straddles three different realities: the past, the present and the future. 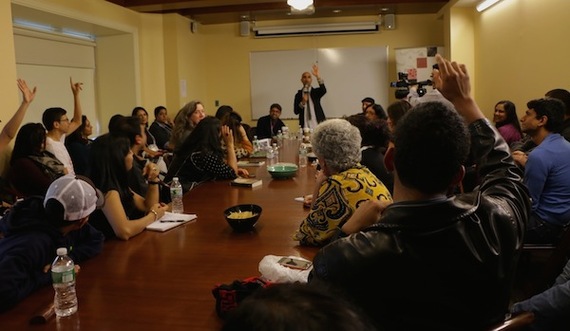 As publisher of the Stewardship Report, one of my favorite sessions was with the Metropolitan Museum's Digital Director Sree Sreenivasan, formerly of Columbia's J-School. This panel, also featuring Rashmee Roshan Lall, Preeti Singh, Mitra Kalita, Ajit Balakrishnan and moderated by Lakshmi Gandhi, was entitled Finding your Digital Voices, Changing the Landscape of Publishing.

Sree, one the most effective voices in global social media, spoke to me about the leadership of Aroon Shivdasani, founder of the IAAC:

Aroon and the IAAC have already set the standard on celebrating cinema from India. When I heard she was going to tackle a new literary festival, I knew she'd soon own that space as well. Few people in the U.S. have the same convening power that she does and it's fascinating to watch her in action and cheer her on. 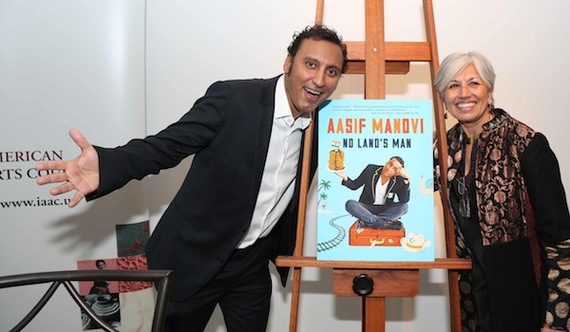 Other workshops focused on Writing the City: Tales from the Metropolis, from New York to Kolkata; From Page to Celluloid: Adapting Books for the Big Screens, with Mira Nair, Mohan Sikka, Nandita Das, and Vibhuti Patel; and Writing Between Worlds: Immigrant Issues.

Paul Knox moderated the intense, sometimes humorous and always informative session on Writing for the South Asian LGBT Community. This featured Ghalib Shiraz Dhalla, Rakesh Satyal, and Mashuq Deen and emphasized the diversity of lesbian, gay, bisexual and transgender writing across genres. These writers discussed LGBT issues that continue to be taboo on the Indian subcontinent - as well how being labeled as LGBT authors may influence their work and marketability. 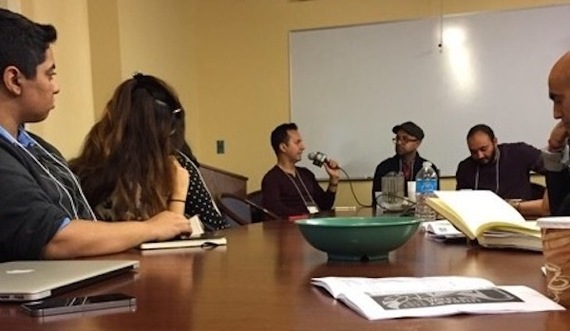 Rakesh Satyal is the author of the novel Blue Boy, a gender-bending comedy about a gay Indian American boy who thinks that he may be the reincarnation of Krishna. Blue Boy was the winner of a Lambda Award and the Prose/Poetry Award from the Association of Asian American Studies and is now taught at high schools and colleges worldwide.

Los Angeles-based writer-director-producer, Ghalib Shiraz Dhalla was born in Kenya. Ghalib's critically acclaimed debut novel Ode to Lata was followed by The Two Krishnas. His second film, Embrace that he wrote, produced and directed, is the first ever dramatization of the 2008 Mumbai terror attacks. 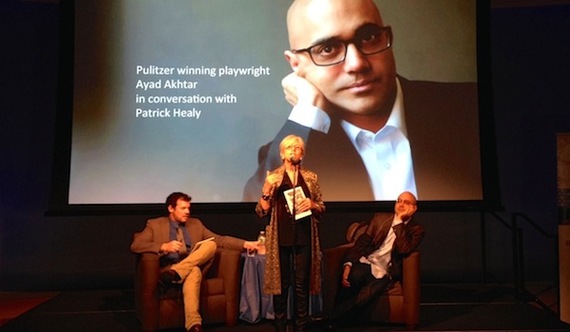 Other intriguing panels included Fiction - including Short Stories, Cooking up Tales: the Hot New Genre of Food Writings, Modern South Asian Tales for Children, The Serious Business of Comedy Writing, and Playwriting and Dramas. The last one included excellent demonstrations of the playwrights works read by some of the actors in the room. 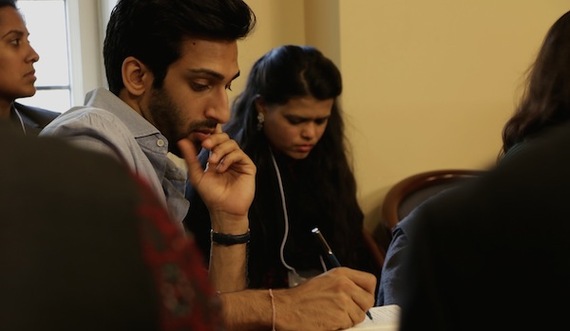 Festival attendees were particularly attentive on the campus of Columbia.
Photo: IAAC.

I spoke with Angana Chatterji, co-chair the Armed Conflict Resolution Project at the University of California at Berkeley, after the symposium. I was impressed by her historical interpretation:

Historical fiction of the late colonial encounter unpacks times and eras that have definitively shaped the impossible present of South Asia. Through narration, individual characters, and storylines across expansive canvases detailed with immense care, the three provocative, acclaimed, and eminent writers on today's panel bore witness to history and counter-memory. Their journeys are crafted from rich archives influenced by familial and historical, scholarly and autobiographical relations to India.

For so many of us of and from what is India today, the complex intersectionalities of race and caste, religion and ethnicity, class and gender, colony and post-colony, nation and nationalisms, architecture and governance, revolution and complicity, victim and survivor, violence and stability, difference and friendship, beauty and heartbreak, knowledge and nostalgia, place and unbelonging, hospitality and impossible returns, the familiar and the incomprehensible, too much and too little, have been formative in contouring desire, distance, intimacy, and resistance.

These themes appeared in, and were expertly storied, in the work of our panelists. 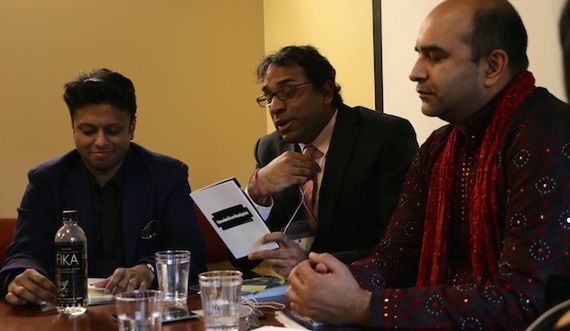 The poets had their day at the first Indian Literary Festival. Photo: IAAC.

As founder of the Indo-American Arts Council (IAAC) in 1998, Aroon Shivdasani has labored for sixteen years to build an awareness of Indian artists and artistic disciplines -- performing, visual, literary and folk arts in North America -- as well as nurturing and promoting emerging artists from the Indian subcontinent. Aroon's laughter and joi de vivre are her signatures. She is fond of telling her friends that life is not a dress rehearsal - she embraces life completely and intensely. She has lived in India, England, Canada and the U.S., and has friends of all cultures, ages and religions. She holds a Masters Degree in English literature and drama as well as a Diploma in Marketing and Advertising. 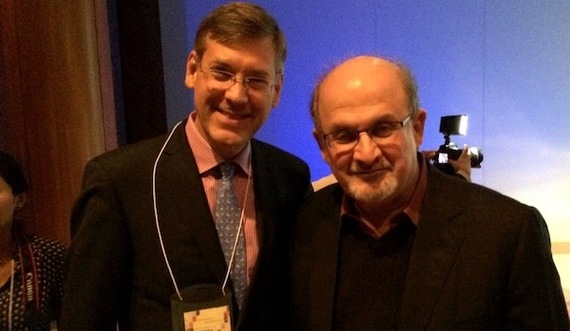 Congratulations to Aroon Shivdasani for the depth and breadth of this first literary festival celebration of the Indian and Indian Diaspora community. Her leadership begs the question: What could the IAAC achieve for India if it had its own cultural center here in New York City? The J. Luce Foundation was delighted to have had the opportunity to support the Herculean efforts of this thought leader and global citizen.