When I bought my couch a few years ago, I sat on every couch in the store. I felt the difference between a deep seat and a shallow one, a tufted back and a cushion back, a twill and a velour. I learned about the wood frame and the springs and how the cushions were wrapped. I learned about the many upholstery and finish options. I did a lot of hands-on "research" (known as lounging on couches) before I chose my beloved, perfect, couch: a triple cushion tight back version with rounded sides and a modern style.

Oh, how I loved my couch. Today, it's fair to say, the bloom is off the rose. 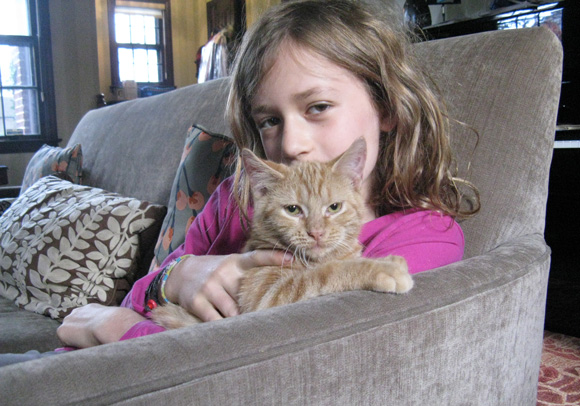 Because recently, a team of scientists from Duke and UC Berkeley told me what's actually inside those cushions I so carefully examined when I bought the pretty thing. Despite the clean lines, the comfortable seat depth and the perfect color, it turns out that what's inside those cushions is not so pretty.

It's called chlorinated Tris, and it's a carcinogenic flame retardant chemical. Someone poured a cancer-causing chemical in my couch, and no one said a word about it!

A while back, after learning that hazardous chemicals are added to furniture and other household products without being labeled, I took one of the perfectly firm cushions off my couch, unzipped its perfectly seamed upholstery, and used scissors to cut a small piece of foam from the inside. I wrapped it in tin foil, sealed it in a pair of Ziploc bags and mailed it to a team of scientists collecting foam samples for a study.

That lipstick-size piece of foam became one of 102 couch samples gathered from around the country and tested for the presence of flame retardant chemicals. As reported yesterday, the researchers found that 85% of the samples contain toxic or untested flame retardants, and 41% of the samples, including mine, contain chlorinated Tris, the same cancer-causing chemical that was banned from children's sleepwear in 1977. This study shows for the first time the extent to which toxic flame retardant chemicals have penetrated the furniture market. In my case, it's laboratory proof that I've got a chemical that is recognized as hazardous by the World Health Organization, the National Cancer Institute, the National Research Council and the Consumer Product Safety Commission -- In. My. Couch.

Chlorinated Tris is added to all these couches under the guise of protecting my family from fires and to meet the requirements of California Technical Bulletin 117, the furniture flammability standard that drives the use of flame retardant chemicals nationwide. But it doesn't make us safer. Indeed, when flame retardant chemicals do burn in a fire, they can create more soot and smoke, making fires even more dangerous.

Chlorinate Tris doesn't stay in the couch, either. Research shows that the chemical migrates out of furniture and into house dust, where it's inhaled and ingested. Especially by babies and toddlers, who are on the floor and put their hands and toys in their mouths. And also especially by cats, who groom themselves by licking their fur. (I write this as my new kitties sit next to me on my blasted couch, happily grooming themselves.)

Apparently, I can help reduce the levels of the chlorinated Tris in my household through careful hand washing and vacuuming which, quite honestly, makes me want to heave my Hepa-filter vacuum out the window. Not that I don't like a well-vacuumed home. But every time someone tells me that I am personally responsible for cleaning up a lucrative industry's mess that has gotten into my home and threatens my children (and my kitties!), the more it sounds like nails on a chalk board.

So, let's put the vacuum aside and fix the federal law that allows the sale and use of hazardous and untested chemicals. Tell the Senate to pass The Safe Chemicals Act now!