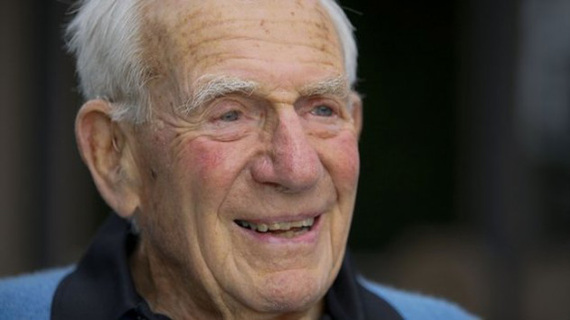 What happens when San Diego outgrows its $1 billion expansion of Lindbergh Field?

Some 17 million passengers used Lindbergh each year. Noise, safety and environmental concerns become ever more vexing as the airport is surrounded by the high-rise city that San Diego is becoming.

Land is expensive. The Marines appear to have no interest in sharing space at Miramar airfield for a new civilian airfield. It's a long drive to the desert, if the county were to build one there.

But the ocean is wide open, and it's right here. Why not build the world's first major floating airport? This could be a model for other US cities on the ocean, especially in a time of rising sea level.

This is the practical and visionary idea being "floated" by Dr. Walter Munk, who holds the Secretary of the Navy/Chief of Naval Operations Chair at the Scripps Institution of Oceanography at UC San Diego. Munk is widely considered the dean of world ocean scientists.

At age 98, Munk has been floating practical and visionary ideas for a long time. His forecasts of surf dynamics helped guide the Allies in amphibious landings throughout the Pacific, in North Africa and in Gen. Dwight Eisenhower's decision to postpone the D-Day invasion during World War II.

Munk solved the mystery of why one side of the moon always faces the earth in its rotation, showed that Alaska's waves (and in the summer San Diego's) mostly start in Antarctica, pioneered advanced acoustical techniques to provide information about how the deep sea works, and discovered the ways winds shape currents, encapsulated in his phrase "wind-driven gyres."

To Munk, the idea of a floating airport for San Diego would be inexpensive compared with terrestrial alternatives, and it would help to brand San Diego as the great ocean metropolis of the future. It would be cool, iconic and great fun. A tourist attraction, even. He adds that San Diego and Tijuana could do it together.

"It would be nice to change something before everyone else does it, and it could become San Diego's trademark," he says in his soft Austrian accent, as we sit sipping chardonnay with guacamole and chips at his small estate overlooking Black's Beach. "There are several dozen coastal cities in the world that are having problems accommodating their airports with expanding use and growing populations. Let's be the first."

(Of course, Munk insists the idea is not "his," so much as a proposal by himself and two esteemed colleagues. One is Frieder Seible, the former dean of the Jacobs School of Engineering at UC San Diego and an expert in expanding airports, such as San Francisco International, into the sea. The other was marine explorer Fred Spiess, a former director of the Scripps Institution of Oceanography and developer of novel ocean vessels, who died in 2006.)

First, the runways would be about twice as long, which would cut down on taxiing time, and save money. "You see," says Munk, "when you land, you would end up stopping at an entrance tunnel and when you take off you would leave from there so you wouldn't have to go to the end of the field. Now, when you land, you come in and stop right at the terminal, but taking off you have to taxi for 10 minutes."

The entire platform would be supported some 20 to 25 feet off the waves on columns he calls spars, giant versions of the spar buoy.

Munk knows much about creating stable ocean platforms from his relationship with Spiess, who helped to create the Floating Instrument Platform, or "FLIP." The famous 355-foot research vessel anchored in Point Loma flips from horizontal to vertical to allow data to be collected on whale sounds or temperature gradients hundreds of feet below the surface. He believes an entire airport would move very little, even in a storm, so pilots would not notice.

How would people get to the airport? In boats? No, suggests Munk. "There would be high-speed transportation tubes built on the ocean floor, much like San Francisco's BART system," he says. The tube would "come up" to the floating platform. All ticketing and baggage collection would be done at the current airport, which Munk likes because it's downtown. You don't have to drive far. "Narita, Tokyo's airport, already does this."

In fact, Munk points out that Narita was almost the world's first floating airport. A major model was even built. But planners decided at the last minute to build it on fill, which led to problems with settling. A real floating airport "remains to be done by some city with a little bit of guts."

But what about fog? San Diego--or San Francisco--is a city famous for its marine layer, and that's just the coast. "There is a fog problem at Lindbergh Field already," Munk says. "But I have been told that within a very few years all landing and takeoffs will be instrumental." With the growth in sensor technology, as well, fog is not the problem it once was.

A floating airport would solve the problem of noise pollution, since it would be a mile or so from land. Noise is a major problem at Lindbergh, so far as neighbors are concerned, and to Munk's way of thinking, reducing noise increases nearby property values as well as makes the experience of San Diego's "wonderful" open-air theaters much more pleasant.

Best of all, Munk says, the floating airport could be built today. We already know how to do it. The Navy did pilot studies for other locations long ago. San Diego has world-class engineering schools. The talent is here. It would just take some practical vision -- and a little bit of guts.