This week is almost all about the Tony Awards. (I know, I have to report the results of my Tony voters poll to about a dozen producers today.) But I'm already looking beyond the Tonys. You know, the glitzy benefits, the sleep and the opening of Fly By Night at Playwrights Horizons. I saw this musical very early in its preview period, so I shall not write about it in detail, but, needless to say, I liked it enough to do this piece on it.

I was particularly struck by the effectiveness of the cast, especially the three young leads. (And, while he is not featured in this story, let me also give a special shout-out to cast member Bryce Ryness, who has one of the nicest bio lines I've read in a long while: "Thank you for coming to this show, supporting the arts and helping me feed my wife and three children whom I love very, very much.") Fly By Night is about fate, love and loss. Out of those, the second topic provides for more entertaining discussions, so I emailed Allison Case, Adam Chanler-Berat and Patti Murin and asked them some questions about just that. Below is the result:

What is the craziest thing you have ever done for love?

Case: Okay, so I don't know if it classifies as crazy, but I wrote a song and used it to ask someone to prom in 11th grade. And then sang it in his class. In front of everyone.

Chanler-Berat: I once joined a gym for someone I liked. That sounds really horrible and pathetic. Let me clarify. I didn't join the gym to get in shape for him. I joined the gym because we were out of town and I knew I'd get to see him more if we went to the gym together. Is that creepy? That's creepy.

Murin: I feel like I've been doing crazy things for love my whole life! One at the top of the list was when I was in college. I was so in love with someone who was completely off limits, and he felt the same way about me. We lived about two hours away from each other, so late one night, we got in our cars and met each other halfway between our houses, at a random rest stop on the Palisades Parkway, just to see each other. We went to the Garrison train station and just sat there, talking for hours and looking at the river. We didn't even kiss each other, we just had to be together. Very Harold and Miriam, and terribly romantic. 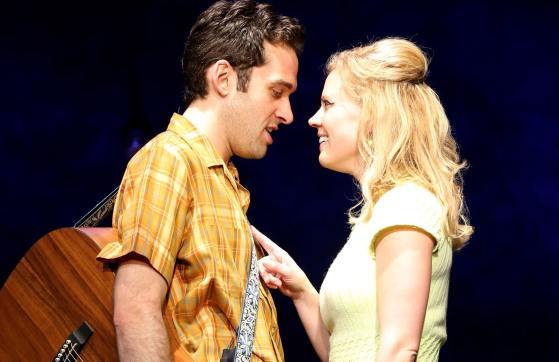 What was your most awkward first encounter with someone you went on to date?

Case: Well we didn't go on to date, but I awkwardly went on a date that I was super excited about, not realizing the other half didn't think it was a date at all until a little more than half way through.

Chanler-Berat: I'm turning this question into a bad date answer because I have an arsenal of bad date stories that I've been dying to use. I went out with someone who didn't think it was a date and I totally did and I was so nervous that upon my exit from the bar I knocked over and shattered a wine glass with my giant backpack. Shockingly, we did not go on to date.

Murin: I don't really have any awkward first encounters with anyone I went on to date, but I have many a bad date story. I can never forget the brain surgeon who I met out at a bar when I was playing wingman for a friend of mine, who somehow weaseled his way into a Saturday night date with me. We went out to dinner, and he actually, literally, would not talk about anything else but the

brain. And surgery on the brain. In graphic detail. While I was eating. Eating food. One of the only times in my life I have ever been tempted to fake an emergency and have to leave the date early.

Where did you meet your first love?

Case: My second year of college. We both got cast in a show together and started spending a lot of time together. I had no idea I was in love for a few months, I just knew I loved spending time together. And then it all made sense.

Murin: I would have to say that my first love was my boyfriend in high school, and we met when we were in junior high. He also happened to live right next door to my cousins. He was one of my best friends, and once we decided to date, we pretty much stayed together from freshman year through senior year. Looking back on my history of love thus far, I still consider him my first love, and myself extremely lucky to have learned so much about love and relationships with him.

When did love hurt you the most?

Case: When I broke my first love's heart. I was young and felt I needed to experience more before committing to something serious. I felt haunted by it for months when we finally agreed to meet. When we did, I learned she was seeing someone new and my heart dropped to my stomach. My choice to leave, even though I was very much in love, finally became real and I was forced to deal with it.

Chanler-Berat: Love always hurts. To quote Rick Elice's Peter and the Starcatcher, 'that's how you know it meant something.'

Murin: When love hurts, boy does it hurt. It hurt me most when someone I loved very deeply seemingly gave up on our relationship without warning. Looking back it makes a lot more sense than it did at the time, but the hurt never really goes away. You just have to make sure to learn from it every single time, so at least it's worth it.

Photo credit Joan Marcus. The duo in the first picture is Adam Chanler-Berat and Patti Murin. Allison Case is featured in the lower picture to the right.