There is a message behind this concept: peace, love, truth, wisdom and universality. The artist known as Cryptik doesn't want you to focus on the idea of the cult of personality, rather the message that we are all a united people, a collective consciousness of peoples moving in similar paths intertwined for purpose. His artwork tells a narrative of following the greater mysteries of the world that can unfold before your very eyes if you pay close enough attention. His artwork is "The Hero With A Thousand Faces," the journey of the transformative process within ourselves as we go out into the world with different experiences and return as the archetypal character with a global source and share amongst our circle. The hero's journey is always the same: common man goes on an adventure of epic proportions, internal or external, sometimes one can be a metaphor for the other, then battle zones are encountered, confronted headstrong and the hero reigns victorious, then the hero returns to common man and bestows meaning in everyday tedium. Great stories are told this way -- think Don Quixote, Jesus Christ, Zoroaster, Confucius, Buddha, Luke Skywalker, all of whom tapped into this thread. 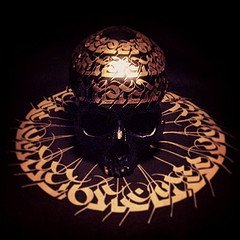 Cryptik uses universal symbols and themes in his work such as: Ganesha, the Bodhisattva, Bob Marley, Gandhi and circular patterns with lettering and characters to represent infinity and the cycle of life. The lettering and calligraphy references ancient scripts such as Sanskrit, Arabic and Hindu -- the language of the Gods, although it is stylized English, but it evokes the written word as sacred and often reads as a healing mantra, quotes, Buddhist chants and spiritual teachings. He draws on imagery that is universal so that it is immediately recognizable and observed as soothing. His work inspires calmness and beauty and a high emphasis on archaic mythology, perhaps the most poetic of artists working today. He leans towards Eastern philosophy, the sacred, the occult and esoteric knowledge, to tell a story and strike a balance amongst what is observable. But at the end of the day, the idea is to create dialogue and inspire curiosity, because he will tell you himself, he has more questions than answers. 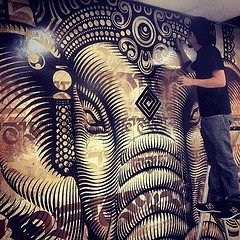 Ironically, Cryptik was raised Catholic, although never really a practicing one. Born and raised in a secular and multicultural society, purpose and meaning can often be subordinate to the needs of a western upbringing. In a place where we often search for answers to give meaning to our terrestrial and existential lives, the idea behind his art was really a quest to find himself. Sometimes career, work, college, marriage, and friendship doesn't make sense, thus we search beyond the limitation and we journey inward to find solace. The Cryptik Movement is a way to transcend into the metaphysical realm and make the art accessible. You can find his work at yoga studios, on bumper stickers, on t-shirts, skateboard decks, phone cases, tattoos, bandanas, murals, scrolls, and one of my favorites -- a black skull with lettering resting on a circular pattern which almost reflects a similar image, reminiscent of a Tibetan skull. Impressive. At art shows he provides sticker packets or something affordable to people who could never afford to buy a print or something on canvas. Once he was approached by an Indian family, who had never been to an art show, gallery or museum, and expressed their appreciation for an image they had observed frequently and told how it comforted them and inspired joy in their difficult lives. For Cryptik, it was worth more than selling fifty canvases -- because that is the point of art, to change lives. 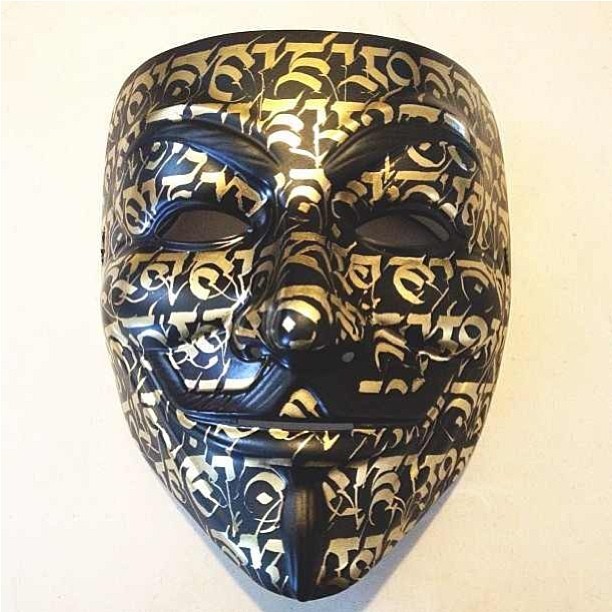