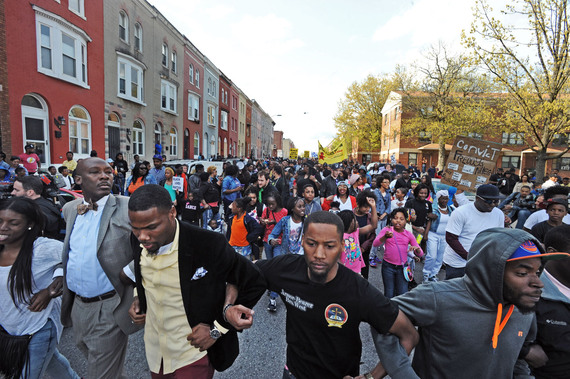 Baltimore is synonymous with blue crabs and the Ravens. Until last year, that is all we were known for. A year later, when you mention that you're from Baltimore, people quickly jump up and look at you with such sorrow, and mention "the riots." This week marks the one year anniversary of the Baltimore uprising that was sparked by the death of 25 year old Freddie Gray. Freddie Gray was a Baltimore native, whose life was cut short after being arrested by local Baltimore police. The manner of which is died sparked national outrage,An autopsy conducted on Freddie concluded that his death was caused by a "high-energy" injury to his neck and spine that was possibly a result of the "rough ride" in the back of the police van. Baltimore residents were tired of police getting away with police brutality, so the uprising began. His death sparked a citywide protest that lasted for many days. It was the proudest moment of my life, seeing my city stand up to the world.

Now a year later, many ask, how did Freddie Gray truly affect Baltimore? It left a big impression, long after the camera crews packed their bags, the citizens continued to live in communities suffering from poverty, the looting of the CVS on Penn-North, and other business affected the local business heavily. Many still haven't came back. This leaves the residents where they were a year prior,maybe worse off.

The mayor of Baltimore, Stephanie Rawlings Blake made news worldwide for her mishandling of the uprising. A lot of residents lost their trust in her. During a press conference, she called the protesters "thugs." That statement solidified the distrust residents already had for her. What she didn't realize was that those were young black boys. Society already paints them as thugs, so why would she reaffirm this stereotype as a black woman and mayor of a majority black city? She also put a curfew on the city. That affected many businesses, due to the early closure they lost out on money. During this time, they were many sporting events, so bars and restaurants lost out. Collectively, Stephanie did not know how to handle the situation, she was overwhelmed and over her head. A year later, we will be electing a new mayor. Currently Baltimore has many interesting candidates, one of them being Deray Mckesson, Black Lives Matter member, ex-mayor Sheila Dixon, and Nick Mosby, husband of Marilyn Mosby (State Attorney in the Freddie Gray case). This is a great time to be a Baltimore resident because the next mayor we choose, will decide the fate of the city. We have a lot of internal issues we have to fix ,which includes schools. Especially getting clean water in schools, many children grow up with lead poisoning, Freddy Gray was one of them. At this moment, many people aren't sure who they will vote for.

The court case of Freddie Gray looks sullen, in May 2015, Marilyn Mosby announced that the six officers linked to Freddie Gray would in fact face charges. That was a day of celebration in Baltimore. We were all proud that we made a small step to change. A year later, doesn't look like it made much of a difference. William Porter is the first officer to stand trial, he was charged with manslaughter for failing to put a seatbelt on Gray. His trial ended in a hung jury after just three days in December 2015. The other officers are scheduled to stand trial throughout 2016.

Not much has changed in Baltimore a year later, and I'm hoping it will. We are still fighting poverty, lack of jobs and high drug rates. The uprising gave us a glimmer of hope, but it quickly dimmed. Freddie Gray made me proud of my city, we all joined together for a common case and weathered the storm together. We showed the world just what was happening in Baltimore. Maybe much hasn't changed, but we are still here.