Americans say by a 9-point margin that Freddie Gray's death in Baltimore wasn't an isolated incident, but rather part of a broader pattern in how black men are treated by police, according to a HuffPost/YouGov poll conducted before Maryland's state attorney announced Friday that Gray's death was considered a homicide.

White opinions, however, have varied. In a survey taken just after Brown was killed in Ferguson last August, white Americans said by a 5-point margin (40 percent to 35 percent) that the shooting was an isolated incident, not part of a broader pattern in the way police treat black men.

Later, as the case attracted more attention, the perception only grew that Brown's case was an anomaly. After a grand jury decided not to indict Ferguson police Officer Darren Wilson for the death of Brown, 53 percent of whites said Brown's death was an isolated incident, while just 29 percent considered it reflective of a broader pattern in the way police treat black men. A survey this February found similar results.

But in the wake of Gray's death, and for the first time, white Americans are slightly more likely than not to cite a broader pattern. Thirty-eight percent call Gray's death part of a broader pattern, while 36 percent say it's another isolated incident. The remainder are unsure. 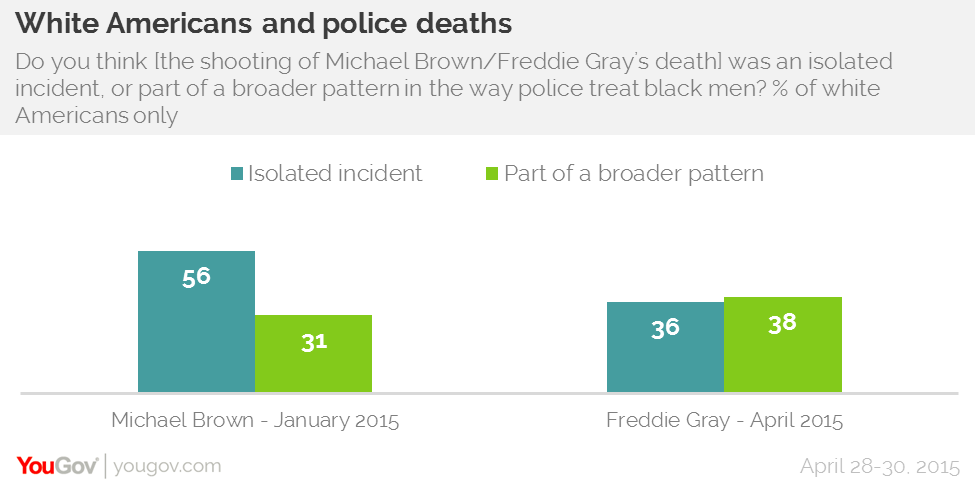 Sixty-eight percent of Americans, including 66 percent of whites, say they can understand why many black Americans are angry about Gray's death.

Black Americans are evenly split as to whether Baltimore residents' reactions to Gray's death have been reasonable, while whites say by a 5-to-1 margin that they have not. Whites are also 42 percentage points more likely than blacks to say the races receive equal treatment in the criminal justice system, and 28 points more likely to say that blacks and whites are treated with equal fairness by police in most cities.

Overall, 36 percent of Americans say police in most cities treat blacks and whites the same, while 42 percent disagree, and 22 percent are unsure.

The HuffPost/YouGov poll consisted of 1,000 completed interviews conducted April 28-30 among U.S. adults using a sample selected from YouGov's opt-in online panel to match the demographics and other characteristics of the adult U.S. population.