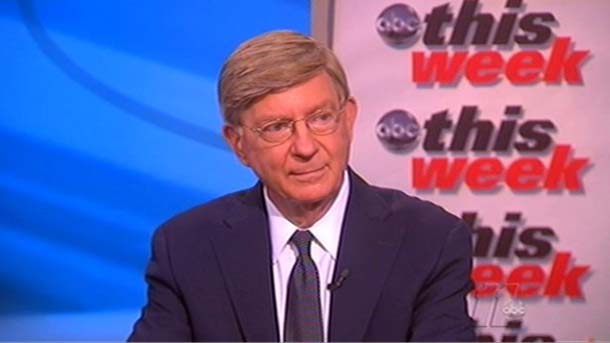 George Will pays a lot of attention to baseball statistics. He's a rabid Cubs fan, and he's written two books on the game, including the 1990 best-seller Men at Work: The Craft of Baseball.

Unfortunately the nationally syndicated columnist doesn't show nearly the same interest in climate data. He's obviously a numbers guy, but when it comes to global warming, Will strikes out every time.

Will was opining on both topics last Sunday on ABC's This Week Sunday morning gabfest (video below), where he is a regular guest. Host Terry Moran wrapped up the show by turning it over to Will for his perspective on Major League Baseball at mid-season, just before the annual All-Star Game.

Baseball's Golden Age. "Every baseball fan talks about the golden age of baseball and it's always when he was about 12 years old," Will said. "I have news for you. This is the golden age. Competitive balance is back. The Pirates haven't had a winning season in 20 years, 1992. They have the best record in the National League, they have the best new ballpark, and they have the most exciting player in the National League in Andrew McCutchen in center field.

"But more important, the product is selling," he continued. "People are coming out as never before. In 1955, the Brooklyn Dodgers win their only World Series. Great team. Robinson, Furillo, Hodges, Reese, all those guys. The whole city of New York loved them. They drew 13,500 a game. This year the average attendance in baseball is 31,000 a game and going up. This is the golden age."

In fact, the Washington Nationals--not the Pirates--had the best record in the National League last Sunday, but I'll cut Will some slack. After all, he did come up with some impressive stats on attendance. When it comes to baseball, he has a high on-base percentage.

"It is a political issue," said Dionne. "Because the question is are you going to do something about it or not. During heat waves, belief in global warming goes up--surprise surprise--in the polls. But what we really see is wild weather not only here but all over the world. What I don't understand is why people are so resistant, why my conservative friends are so resistant, in taking out an insurance policy. There is a lot of evidence that human activity is changing the climate. There's not a lot of dispute among scientists about this. Why wouldn't we want to take out an insurance policy to protect ourselves? Because if we go wrong on this, we're making an awfully big mistake."

Will was up next, and, as usual, he whiffed.

"How do we explain the heat? One word: summer," Will said. "I grew up in central Illinois in a house without air conditioning. What is so unusual about this?

"Now come the winter, there will be a cold snap, and lots of snow, and the same guys like E.J. will start lecturing us: 'There's a difference between the weather and the climate.' I agree with that. We're having some hot weather. Get over it."

Climate's Molten Age. Will is correct that it is important to not confuse isolated weather events with climate change. But if he had spent a smidgeon of the time he has spent poring over baseball minutiae researching climate trends, he would have known that baseball attendance is not the only thing that has changed since 1955. Between 1955--when Will was 14--and last year, the average summer temperature in his home state of Illinois jumped 1.15 degrees F, according to data compiled by Climate Central. And that has meant more heat waves. In Chicago alone, there were 14 heat waves lasting an average of 9.2 days from 1987 to 2005, resulting in, on average, 53 excess deaths per year, according to a 2011 Johns Hopkins study. The worst one, in 1995, killed more than 700 residents. Last week's heat wave killed 18.

Chicago is just one example. As it turns out, heat is the number one weather-related killer nationwide, claiming, on average, more lives each year than floods, lightning, tornadoes and hurricanes combined, according to the National Weather Service. From 1999 to 2003, excessive heat killed 3,442 people across the country, according to the Centers for Disease Control and Prevention.

If current carbon pollution trends continue, Chicago can expect even more scorchers. Toward the end of this century, the Windy City likely will experience more than 70 days every summer with temperatures higher than 90 degrees and 30 days higher than 100 degrees, according to the Union of Concerned Scientists' 2009 report, "Confronting Climate Change in the U.S. Midwest." Air quality likely will decline, the report concluded, due to increased smog, triggering more asthma attacks and other respiratory problems. The 2011 Johns Hopkins study's worst case scenario, meanwhile, projected that heat waves could kill more than 2,000 Chicagoans every summer during the final decades of the 21st century.

If Will considered what hotter summers would mean for baseball--especially in Chicago--perhaps he would pay a bit more attention to what we are doing to wreck the climate. For the past few years, his beloved Cubs have been mired near the bottom of the National League's Central Division. Could it get any worse at Wrigley? Given how ballplayers struggled through last week's heat wave, unfortunately, yes.

Elliott Negin is the director of news and commentary at the Union of Concerned Scientists. He is a former managing editor of American Journalism Review.