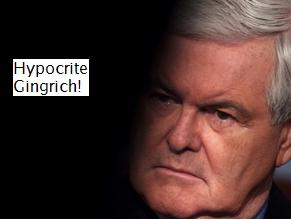 If Newt Gingrich expects to run for president in 2012, let alone win, he better think again. Seems his ex-wife Marianne has a little score to settle, and has gone public in a scathing magazine interview about her former hubby's kinky past, especially as it relates to marriage. Thanks to Mrs. #2, we've now confirmed what most of us have known all along: that when it comes to family-values, Gingrich, like most Republicans, believes there's two sets...one for him and one for everyone else.

So what's in Newt's closet? Well, Marianne unloaded her bombshells in ESQUIRE's September profile of the former House Speaker. Here's some of the juiciest revelations:

Now don't get me wrong. In general, I sit in judgment of no one, especially those with marital failure and even infidelity. There's often more to a story than meets the eye, and no one's perfect. What a couple does behind closed doors is their business, not mine. But what I
do
have a major issue with is arrogant, self-righteous morality-cops like Gingrich who sanctimoniously lecture the rest of us on family-values while they're out cheating on their wives, screwing everything in sight. And in Newt's case in particular, even suggesting that the Mrs.
sanction
the affair. What kind of sick, twisted, radical family-values is
that
?

We surely remember how these skeevy hypocrites like Gingrich crucified Bill Clinton back in the 90's over his affair with Monica Lewinsky. He became just the second sitting president in United States history to be impeached. Yet one by one these witch-hunting hypocrites including Gingrich, Bob Barr, Henry Hyde, Robert Livingston, Helen Chenoweth, Dan Burton, John Ensign, Larry Craig and others were all subsequently embroiled in their own humiliating public sex scandals. These philandering phonies went ahead with their Clintoncide despite knowing they couldn't keep their own pants on. What unmitigated gall.

I cannot tell you how downright giddy I am to see Gingrich's marital indiscretions broadcast for the entire world to see in all their disgusting, shameful, specious glory. No one deserves to be metaphorically stoned in public with his integrity and reputation dragged through the mud more than the smug, duplicitous, self-aggrandizing phony Gingrich.

As Stephen Colbert noted about Gingrich Wednesday night, "He's so morally upright he's only had sex after he was married, just not always to the woman he was married to."

It's hard to image Gingrich setting sail next year for a run at the White House. As I've written here on this blog years ago, his serial philandering will keep him from ever sitting behind the Oval Office desk. But if he does decide to defy conventional wisdom and run anyway, it'll be a lot of fun to watch him implode.

When will these glass-house-dwellin' Republicans finally learn not to throw stones...