Just over a year ago, Senator Tom Harkin released a report detailing the predatory nature of many for-profit colleges. According to the report, these schools are often incredibly expensive, leave students with huge debts, have poor graduation rates, employ aggressive and unethical recruiting tactics, and receive billions of dollars in taxpayer money. Typically, for-profit colleges rely on federal grants and student loan money to cover the cost of high tuition prices of what often amount to worthless degrees.

In 1972, Terry L. Myhre purchased Globe University, the first of many for-profit colleges Myhre would purchase and later form into the "Globe Education Network." Myhre now owns numerous colleges in the midwest. He also owns 87 percent of the shares of the publicly traded Broadview University, formerly Utah Career College. In addition to the Globe Education Network, Myhre also finances a truck driving school in Shepherdsville, Kentucky. Recently though, many of Myhre's schools have come under fire for allegedly engaging much of the same behavior listed in Tom Harkin's report on for-profit colleges.

Just two months ago, Globe University was forced to pay $395,000 in damages to former Dean, Heidi Weber, after she was fired for blowing the whistle on Globe University's unethical recruiting policies. Now, the school faces a class action lawsuit from five current students who claim Globe misleads prospective students, fabricates job placement numbers, accreditation, and transfer opportunities to other institutions -- all while saddling unsuspecting students with student debt at the expense of American taxpayers.

From 2011 through 2012, Globe was the recipient of more than $170 million in federal student aid. According to a former Globe University admissions representative, "We were really focusing on recruiting bottom-of-the-barrel-type students, the ones that rarely had the means. Essentially, if you have a heartbeat and you can sign your name, you qualify for Stafford Loans." Another former Globe admissions representative, Hannah Von Bank, testified that Globe recruiters are actually trained to target those with low-income because this group is eligible for Pell Grants, and this was "free money" for the school.

Another source of revenue for for-profit schools in general and those in the Globe Education Network, comes from military veterans and funding from the GI Bill. Many for-profit colleges have been accused of targeting student veterans because revenue from the GI Bill does not count toward the mandatory 10 percent, which must come from a non-government source. Depending on a veteran's time spent on active duty, he or she would be eligible to have 40-100 percent of tuition paid for through the GI Bill. Globe Education Network colleges seem to heavily target student veterans, and Broadview University reports that military veterans and family members make up 18 percent of their student population.

Myhre has also expanded to Kentucky, where he finances the career college, Truck America Training and also seems to be connected to the local Board of Education. This career college offers a four-week heavy equipment training course and certificate for $9,000 (not including room and board). Much like Globe Education Network schools, Truck America Training students are encouraged to utilize state and federal tax dollars to pay for their schooling. Instead of Pell Grants and student loans, students receive funding through Vocational Rehabilitation, the Workforce Investment Act, and the Trade Assistance Adjustment program.

The EdOp Loans come with a very high 18 percent interest rate with monthly payments which also require repayment while students are still in school. Much like other private student loans, with the EdOp student loan, borrowers are subject to an array of late charges, collection costs, and the interest is capitalized. Moreover, it certainly does not seem very hard to default on one of these loans either. For instance, upon graduating or withdrawing from school, borrowers immediately go into default after 30 days without payment. Other reasons for default include: failing to notify the lender of a name change within 10 days, or upon death of the borrower or co-signer. If a borrower defaults, the student's transcripts will also be held until the bill is paid.

Perhaps even more disturbing is that the mailing address listed on the EdOp Loan website also happens to be the same mailing address of American Accounts & Advisors, a debt collection agency. This happenstance could imply that these loans, which are made to high risk borrowers, are not expected to be paid on time. And if a borrower falls behind on this loan, the school holds students' transcripts until the loan is paid. Such a predatory move would allow more money to be made over the life of these loans with fees, capitalized interest, and collection costs added to the cost of the loans. 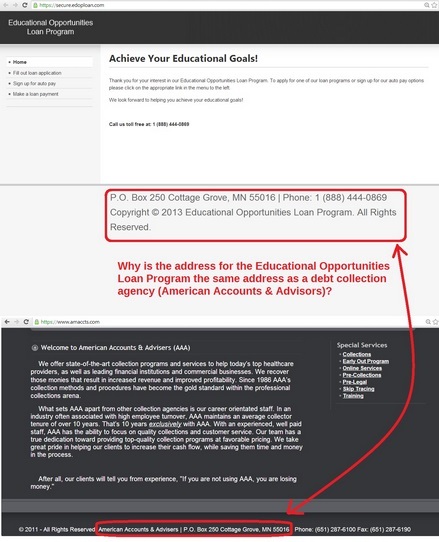 The fact that Globe University, Minnesota School of Business, Broadview University, and owner Terry Myhre have even entertained the idea to charge an incredibly high, 18 percent interest on student loans is alarming. Such a move only solidifies the argument of those making claims of unethical behavior and placing a greater importance on profit, rather than the students they are supposed to be serving.