(Reuterz - New York)
A Goldman Sachs spokesperson has confirmed that its new headquarters will reach "full operational status" in 2010. Constructed adjacent to the site of the former Twin Towers, the structure is "within range" of all of the firm's nearest competitors.

The most financially-efficient building ever constructed, Goldman expects costs to have zero-impact on its bottom line, with funding provided by the issuance of 0% interest Liberty Bonds, tax grants and windfalls from the TARP (Taxpayers Are Really Paying) Program established by its former CEO turned Treasury Secretary Hank Paulson.

"As with everything we do," continued the spokesperson, " this project is wildly profitable; The $2.3 billion of actual cost was covered more than ten times over by the $23 billion in kind contributions from the government. Even if that weren't the case, our ability to take profitable advantage of the misery of others would have paid off the project in three months."

Now on schedule, construction of the imposing hull was inconvenienced when 7 tons of exterior sheathing crushed a project architect in his ground-floor trailer. The local Little League team also got a taste of how Goldman Sachs operates when 3 foot square sections of stainless steel plating rained down on their nearby field during a game.

Goldman Sachs is a wholly-owned subsidiary of S.P.E.C.T.R.E. and trades on the NYSE under the symbol GS. 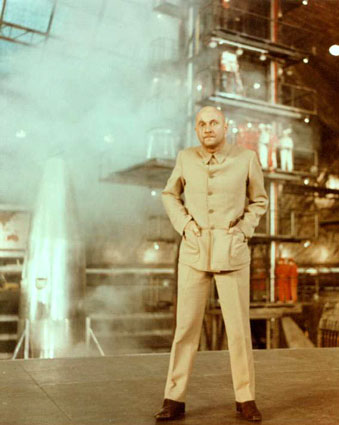 (Photos: above, Lloyd Blankfein supervises interior construction. below The final design as seen by competitors [any resemblance to The Death Star is purely coincidental]) 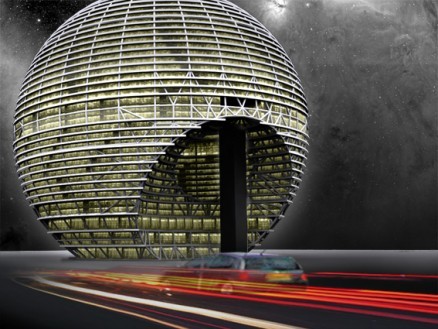