These are 3D renderings of each GOP candidate's vote-approval rating in this year's presidential campaign.

Matthew Epler had run out of ideas when his telecommunications professor at New York University gave him the assignment of representing data in a way that doesn't bore the average Joe to death.

That is, until an ad for butt plugs popped up on his computer -- he swears he's not a creep and was on a music site.

"The first thing that came to mind was, 'Hey, that's a line graph,'" Epler told The Huffington Post. "I found [in the butt plug] a way to represent data beyond just staring at a screen." 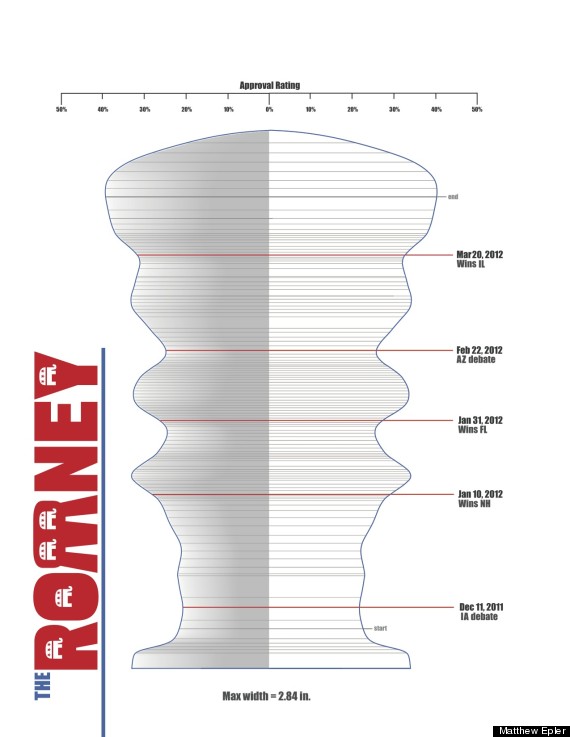 A 3D graph idea was born. Epler took data from Gallup's website and created line graphs reflecting the changes in voter approval for each GOP candidate: Mitt Romney, Rick Santorum, Newt Gingrich, Ron Paul, Michelle Bachman and Rick Perry. He took the data to a sculptor who helped him design the molds.

"Of course everybody in class looked at me like I was crazy," he said. "But when I brought the final casts to class and passed them around, people loved it."

Epler, 30, decided each plug's height based on the length of each candidate's presidential bid, which is why the toys representing Bachman and Perry are so short. "Mr. Huntsman is absent," he wrote on his catalogue. "His ratings were too low to yield a form that could support its own weight."

And for just $350, you can have your own set of silicone candidates. Single pieces are $65, except for Perry or Bachman, whose toys are only $45.

Epler's not changing his career path anytime soon -- his deviation into sex toys is all in good fun.

"I can't remember the last time I bookmarked a database and actually went back," he said. "We need to find a way to change that because data is powerful."

Need lube for these new toys? We've got a debate of presidential proportions between the founders of Baconlube and Honey Lube -- choose your favorite.