Some Republicans complained this week that Democrats used over-heated rhetoric in saying the GOP was holding the country "hostage" by shutting down the government and threatening to default on the country's bills in an attempt to defund Obamacare. An analysis of the words used by national leaders in news and social media discussion of the crisis shows that Democrats have, indeed, used that emotionally charged language -- and they should use it more often.

Why? First, consider the context: A whopping 75 percent of Americans are concerned that the shutdown is having a negative effect on the economy, according to a recent Pew poll. While the GOP is changing its tune to say that they caused this crisis over concern about deficits and debt (rather than their obsession with Obamacare), Americans are much more concerned about the economy than the deficit. In a recent CNN poll, 41 percent of respondents cited the economy as the top issue facing the country today, with only 13 percent saying the same of the deficit. 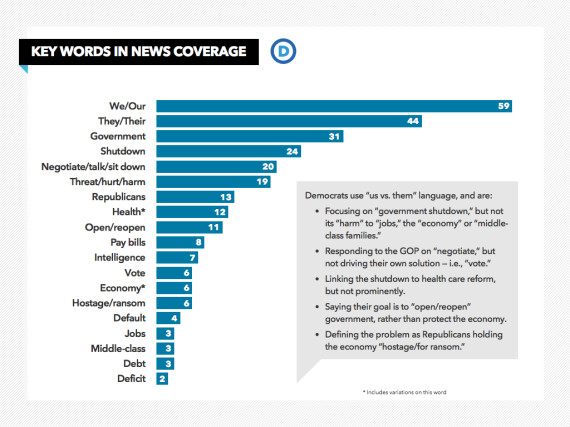 The "word frequency analysis" shown here indicates that the Democrats didn't focus enough on the economy. The terms "economy," "jobs" and " middle class" are low on the list of words used by Democratic spokespeople in national media coverage. The economic harm being caused by the GOP is their Achilles' heel in this crisis, and Democrats should focus on it like the proverbial laser beam.

Terms like "hostage" and "ransom" were also fairly low in the Democrats' crisis lexicon, but it's a very apt analogy for the Republicans' extreme tactics. They are threatening to cause a default that will hit middle-class Americans hard. If the nation doesn't meet its obligations, interest rates will go up for home loans, credit cards and business loans. The stock market will go down, and people will lose money on their retirement savings. The dollar will lose value, so the price of gasoline and other imported products will go up.

Republicans are threatening this harm to the American people for one reason, and one reason only: To derail health care reform enacted by both houses of Congress, signed by the President and upheld as constitutional by the Supreme Court. There's no better analogy for this extreme tactic than that of the hostage taker.

Language needs to create emotional reactions in order to have impact. Psychologists tell us that emotion works with cognition, to help us with attention, retention and motivation. If the message doesn't resonate emotionally, people won't notice it, much less remember it or be moved to action. Powerful metaphors like "holding America hostage" will definitely catch people's attention.

And it's the best language Democrats have to explain why they're not negotiating with the GOP over opening the government or avoiding default. It's wrong to negotiate while they're holding our economy hostage. They'll just keep threatening to shut down the government and the economy, and middle-class families will keep paying the price.

It is a steep price indeed: When the Republicans threatened default in 2011, some 200,000 Americans lost their jobs, and we lost $600 billion in 401(k) retirement savings.

Democrats should be more consistent in articulating their goal in this standoff: To continue growing the economy and creating jobs. To do that, we need the government to be functioning and solvent.

Democratic spokespeople have been on the defensive responding to the GOP's call for negotiations. Democrats shouldn't say they "won't negotiate." They should say, "We're ready to negotiate a balanced plan to grow the economy -- as soon as the Republicans put our government back to work and pay the country's bills."

And they should explicitly and repeatedly define the real problem: an extreme faction of Republicans is holding America's economy hostage. Shutting down the government and threatening default hurts our economy and kills middle-class jobs.

It's not just effective rhetoric -- it's reality.

Doug Hattaway, president of Hattaway Communications, has served as a spokesperson to high-profile leaders such as Secretary of State Hillary Clinton, Vice President Al Gore, Senate Majority Leader Tom Daschle, and successful candidates for the U.S. House, Senate and Governor.

Steve Pierce is an associate at Hattaway Communications. He previously worked with the Democratic Congressional Campaign Committee, where he oversaw rapid response efforts and developed messages and media strategies for top-tier U.S. House races in the northeast.