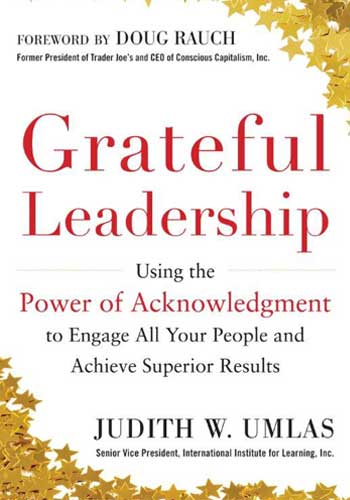 It seems safe to say that humans hold a weighted desire to be appreciated and to feel important. The idea that others not only need us but also see the good both in and out of us, as well as our value, is imperative to sustain a happy, pleasurable life. Sadly, too many have discovered that our at-home selves are often more esteemed than the at-work versions of us. Which brings up the point, considering we spend roughly 40 hours (or more) away from our families each and every week, is wanting to feel acknowledged at work too much to ask for?

I recently began reading about a form of management that focuses on the significance of leading employees with gratitude. The concept -- Grateful Leadership -- comes from a book of the same name by author/Senior VP at the International Institute for Learning Judith W. Umlas. Inside, Umlas discusses how leading a team through gratitude and the Power of Acknowledgment serves as a paramount management tool, allowing the team to perform to their maximum potential while gaining the highest level of satisfaction.

After reading through her books -- Grateful Leadership and The Power of Acknowledgment -- I contacted Judith to ask if she'd speak with me further about her message.

Kyle Dowling: Before you brought up the subject was there much of a Grateful Leadership discussion?

Judith Umlas: Not at all. I immediately Googled Grateful Leadership to see how many books were out there like it or had a similar title. I received a "Googlewhack." One post, one link to two words. Grateful Leadership got one hit. It seemed people were not familiar with the concept and certainly didn't practice it as a model.

KD: Have you found many skeptics when discussing these concepts?

JU: Yes! When I go onsite to a corporation it's often because someone there has heard me speak or read the book and felt their workplace needs it. The crew is usually sitting with arms folded like I don't need this at all. At first, they're skeptical but that's normal.

Three years ago, I went to Finland to deliver a keynote address to eight-hundred project managers. When people found out what the topic was they suggested I take a tour of Helsinki and go home, because acknowledgment did not exist in the Finnish culture. I love a challenge so I stayed, and during the session people ended up standing and acknowledging their bosses in the audience. The message itself is so powerful.

Under a Grateful Leader I find people want to perform to their maximum. When they're not feeling appreciated they feel invisible, demotivated, and deflated, resentful even. To me, it's the clearest testimonial to gratitude in the workplace. It creates a feeling of appreciation both for people and in people. It makes a person feel proud and engenders a feeling of loyalty.

KD: What do you say to those who believe it just doesn't work?

JU: I say let's have a conversation about it. When we first published the Power of Acknowledgment we gave it out at the Project Management Institute Global Congress, and one senior executive from Microsoft took the book in his hands, rubbed his fingers over the embossed letters, and closed his eyes. When he opened them he said, "This book has changed my life." He hadn't even read it yet, but said from the title he could think of five people he needed to acknowledge. So, even the concept has a very magical, powerful impact on people.

I believe we're all meant to give and receive acknowledgment and appreciation. Stephen R. Covey said, "Next to physical survival, the greatest need of a human being is to be affirmed, to be validated, to be appreciated."

KD: Often-times being overly grateful can appear inauthentic, sometimes even condescending. How can one manage to be grateful without coming across patronizing?

JU: I think if you are authentic it comes across as so. Acknowledgment, gratitude and appreciation can't run thin; they can't get watered down if they're real. People smell inauthenticity miles away but they also smell authenticity. What I find about gratitude is that when you speak about it, it becomes real. There's no way to stew in negativity when you make it present.

KD: It appears the message isn't limited to business. It can be carried throughout life.

JU: Absolutely! Whenever someone tells me how great somebody is or is doing, I ask, "Did you tell them yourself?" More often than not they say no - in and out of business. Sometimes when you feel something really deeply it's a matter of making yourself vulnerable to let someone know how much they matter and the difference they make. Vulnerability is very endearing. It makes us human!

KD: The Grateful Leader profiles in your book, what do you feel that brought?

JU: It brought real models and living practitioners, people who were not afraid to step forward. I've come to realize there is always a little bit of fear when stepping out to say, "I am a Grateful Leader." I compare it to Servant Leadership - an, I'm your leader. How may I serve you?-type management approach, which has made some people itch. Grateful Leadership, similarly, has people saying, Why should I be grateful? I give a paycheck, a 401(k). Like Servant Leadership, it's the opposite of a power model. It calls upon the whole human being.

KD: If one were to begin on a path of GL, what would you recommend to be their first step? Other than read the book...

JU: Be able to freely appreciate people for what they do, for who they are, and their gifts and talents, or be willing to be uncomfortable doing it and do it anyway. Some people say they're embarrassed acknowledging someone. I say be embarrassed and acknowledge them anyway. You don't have to be fluent but be willing to step forward and look at people, even the ones you think aren't performing well. What is it about them that is good? What one thing are they doing magnificently? Focus on those and watch the other things come into line.