While only 22 U.S. colleges and universities have actually agreed to sell their shares in oil and coal companies, more than 50 have committed themselves to efficiency projects on campus through a special financing method called green revolving funds, including Harvard University.

At Harvard this week, students, alumni and faculty have occupied administrative buildings, calling for the university to cut investments in the fossil fuel industry. Protesters are questioning how the world's wealthiest university invests its $36 billion endowment.

Climate activist Wen Stephenson is among those camping out, hoping to draw attention to climate change and the extraction of fossil fuels.

"If we are serious about the climate catastrophe that is upon us, then that oil and gas has to stay in the ground," Stephenson shouted during a rally in front of Massachusetts Hall.

At the same time, there's a quieter movement gaining steam, one that's focused instead on taking spaces like Harvard's Northwest Lab Building and making sure they're as energy efficient as possible -- reducing the school's carbon footprint and lowering the energy bill. 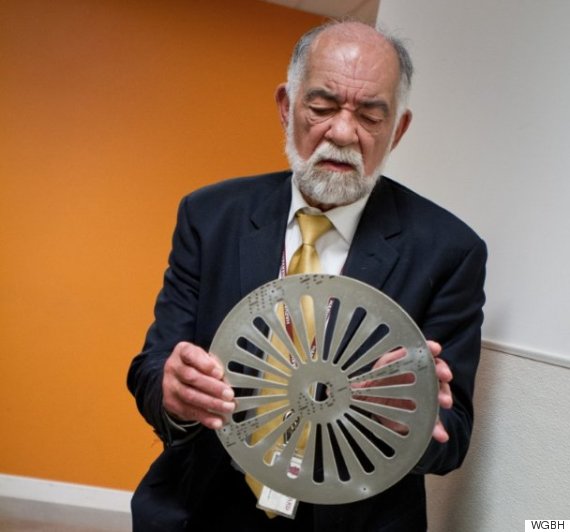 Tom Tribble shows the small design that made it possible to reduce energy use at Harvard's Northwest Lab building. (Mallory Noe-Payne/WGBH).

A Project on Campus

Here's the thing about energy efficiency: It's not sexy. A lot of the time, it's not even visible. Instead, it's hidden away inside walls and down in basements.

"I used to think of buildings the way you think of a human body," said Tom Tribble, senior facilities manager at Harvard University, "They have parts that do different things, perform different functions. Some of it which you can see, some of it which you have to study in a pathology lab in order to figure it out."

As senior facilities manager, Tribble is intimately familiar with what he calls the "guts" of the buildings on Harvard's campus. And, he says, it's not hard to find places where the "guts" can be improved.

"Certainly the lighting systems are an obvious target," Tribble said. "Lighting systems have continued to improve over the last 30 years. That's usually the first thing you do."

For labs, air handling systems are a close second. For safety reasons, air that's gone through a lab space can't be recirculated. The whole building has to be refilled with fresh air several times an hour.

So, a few years ago when Tribble and the facilitates team started looking for ways to save energy, they realized the ventilation rate was a good place to start.

But in order to reduce the airflow into the labs, the valves in the air vents needed smaller openings. The department, though, couldn't afford to replace all the vents. So Tom Tribble found another way.

He tricked the system into thinking the valves were smaller by inserting metal disks with a series of holes cut out in a daisy-like pattern. The disks were manufactured on campus and installed, all at a fraction of what it would have cost to replace the valves.

And so with some creative thinking, five hundred small metal disks, and $300,000 from Harvard's green revolving, Tribble and his team were able to reduce the building's energy use significantly.

Like a growing number of schools across the country, Harvard has committed to cutting its on-campus carbon footprint and it's established a multi-million dollar green revolving fund to pay for energy efficiency upgrades.

That fund is how Tom Tribble got his energy efficiency project financed.

Craig Bradford oversees building maintenance and upgrades for Harvard’s Faculty of Arts and Sciences. He said the project was worth every bit of time and money.

"This project paid back in just about a year. So basically we’re going to do this whole expensive project, and within a year we’ll have saved all the money we just spent on the project in a reduction of utilities," said Bradford.

And that is the appeal of energy efficiency upgrades and green revolving funds. As soon as one project is paid off, that money can go right back out the door to start another. Think revolving door. Plus, the energy savings keep coming in.

Mark Orlowski is the founder of the Boston-based non-profit, the Sustainable Endowments Institute.

"What's nice about that is it then allows the the additional savings to actually either help lower operational costs, or to then go to other interesting, exciting, necessary opportunities to put capital into, where money wouldn't otherwise be available," said Mark Orlowski.

Orlowski's foundation is working to get schools to commit a collective one billion dollars to green revolving funds. And so far they've had more than $110 million from more than 50 institutions -- including Harvard, Boston University, and the University of Vermont.

"Some institutions might not be ready to divest right now," Orlowski said. "I think revolving funds are a great opportunity and option of institutions that maybe aren't quite ready."

But ultimately, Orlowski doesn't think a school's environmental strategy needs to be either, or.

This is the third story from WGBH's On Campus in a week-long series, The Cost of Divestment. The series was done in partnership with WCAI's Living Lab, a forum for the stories behind science headlines.