Protesters from Greenpeace demonstrated against "the destruction and pollution caused by coal" at a North Carolina power plant on Monday, according to a press release.

Activists entered the grounds of the Progress Asheville Power Station in the morning and secured themselves to a coal conveyor belt, according to Greenpeace. They also scaled a 400 foot smoke stack and draped a large protest banner.

WSPA reports that the protesters' banner, which is visible for several miles, reads "Duke Energy: The Climate Needs Real Progress."

According to The Charlotte Observer, 16 protestors were arrested at the Asheville plant.

The plant's owner, Progress Energy, said its goal was to protect the safety of "the trespassers to first responders, as this is large and dangerous equipment," reported Fox Carolina. Interactions between protesters and local police were reportedly "very cordial."

Greenpeace activist Robert Gardner said in a press release, "This plant runs on destroyed mountains, it spews out air pollution, it causes climate change and it poisons the water and the earth. If Duke merges with Progress, the new owners have a responsibility to the people of North Carolina to move to clean energy."

Progress is currently in the process of merging with Duke Energy, although the consolidation has been delayed by federal regulators, according to to The Charlotte Observer.

Check out images and videos of the protest below, courtesy of Greenpeace USA. 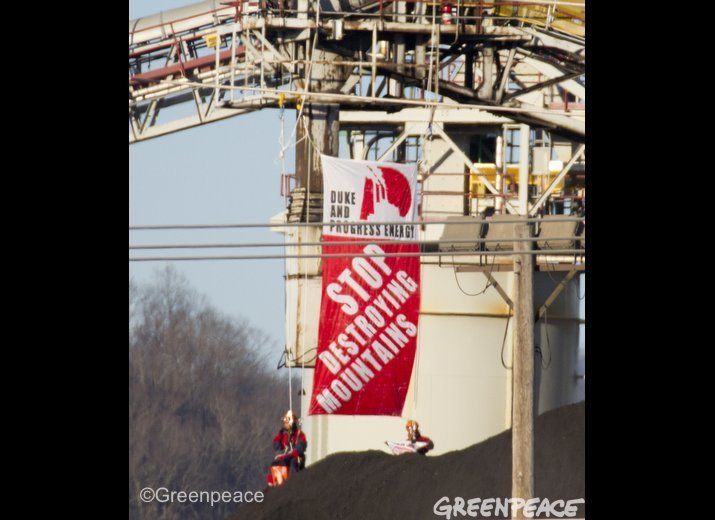